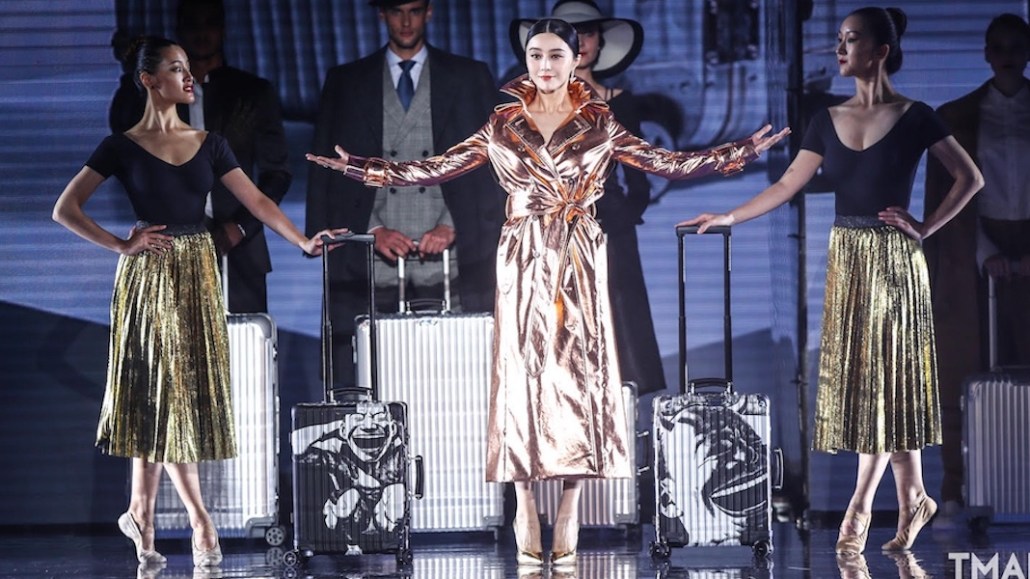 The Chinese customer moves fast, according to Sebastien Badault, the managing director of Alibaba France. During the e-commerce marketplace’s second-annual see-now-buy-now shopping event, a kickoff to the Singles’ Day shopping holiday on November 11, brands only had seven minutes of stage time each to make a lasting impression.

“China is such an interesting market for brands as a whole,” said Badault. “There’s a level of education that needs to happen. The goal is to give brands an arena to tell their story — it’s all about creating that engagement. The Chinese customer buys products, of course, but those purchases are inspired by a compelling story.”

The second iteration of the see-now-buy-now event, called the Tmall Collection, was a four-hour pitch to customers from 27 participating brands, including Opening Ceremony, Furla, Rimowa, Guerlain, Victoria’s Secret, Ray-Ban and Estée Lauder. Alibaba’s team worked with customer data and the brands themselves to decide who would be a fit for the event, based on interest levels from customers and what brands were able to promote. While brands had to pay for their segment productions, there wasn’t a participation fee. Some designer brands, like Opening Ceremony and Jason Wu, were brought on board through a partnership between Alibaba and the CFDA.

The event, filmed earlier this month, is being broadcast in China today on seven platforms, including the video-streaming app Youku and the Tmall app, as well as on local television stations. Alibaba expects the number of viewers to rise from last year’s 7 million (when the only streaming platform was the Tmall app) to more than 100 million.

This rise in exposure ahead of the Singles’ Day could help boost the holiday’s already record-breaking status as the world’s biggest one-day shopping event. Last year, gross merchandise volume for retailers on Tmall jumped 32 percent to $17.8 billion.

It’s an eye-popping sales figure, but luxury brands don’t typically flock to shopping events that are promoted for the masses. For the luxury brands involved in the Tmall Collection event, the emphasis wasn’t on product discounts, but instead, on limited-edition items like the Guerlain Bee Bottle perfume or hand-painted Rimowa suitcases. The goal for Badault, who helped coach the participating luxury brands on how to pitch to the mass Chinese audience, was to bring the new Alibaba Luxury Pavilion to life. The Luxury Pavilion, which launched in August, is a designated hub on the Alibaba e-commerce platform that has a more premium feel, letting brands upload videos and imagery that evoke a luxurious shopping experience, separate from the typical mass-retail Alibaba platform. Only brands invited by Alibaba have pages on the Luxury Pavilion, and only customers who have been identified by the platform as luxury shoppers (based on money spent Alipay and past purchases) can access it.

As luxury brands are warming up to the Chinese e-commerce market, either on their owned sites or through partners like Alibaba and JD.com, there’s a learning curve involved. Brands in the Luxury Pavilion, including Hugo Boss and Tiffany & Co., work with Alibaba’s luxury team to find KOLs (key opinion leaders, China’s influencers) to partner with and create shoppable content.

“The way that brands have been engaging with the Chinese consumer in the luxury space is changing, and with this market, you have to throw a lot of things you’re used to doing out the window,” said Badault. “The ones that do best are the ones willing to reinvent the most and willing to take some chances, as well. The Chinese customer is also so advanced digitally, whatever these brands can learn from China, they can apply to the U.S. and the rest of the world.”

Chinese customers are particularly comfortable shopping on their phones. In fact, Badault said that, as part of the Tmall Collection event, a few Lexuses will be purchased through the mobile shopping experience. To shop the event, customers watching live streams on their phones can tap products to send them to their Tmall cart. Those watching the event on TV can just shake their phones, and whatever’s on screen at that moment will be added to their cart. Badault said that Guerlain, a returning brand from the first event, did more than $500,000 in sales after the live show.

While the U.S.’s Alibaba-equivalent, Amazon, is also trying to ramp up its luxury fashion business, Badault said it’s a false equivalency. Alibaba is a third-party marketplace, rather than a wholesale retailer, plus it shares data with its brand sellers and gives them control over pricing and placement on the site. That data transparency helps luxury brands gain footing in the Chinese e-commerce market, allowing them to learn more about a customer that skews younger than luxury customers in the U.S. or Europe. (The Chinese customer is in his or her late 20s, making them about 25 years and 15 years younger than the U.S. and European counterparts, respectively.)

“Alibaba’s strength is big data. They process 50 billion transactions every day,” said Nir Kshetri, a professor at the Bryan School of Business and Economics. “But perhaps even more important than the sheer amount of data they have is their willingness to share it. Where Amazon has appeared as a black box when it comes to sharing data, Alibaba has established itself as a strategic partner.”