Agencies rethink their dating policies in the #MeToo era 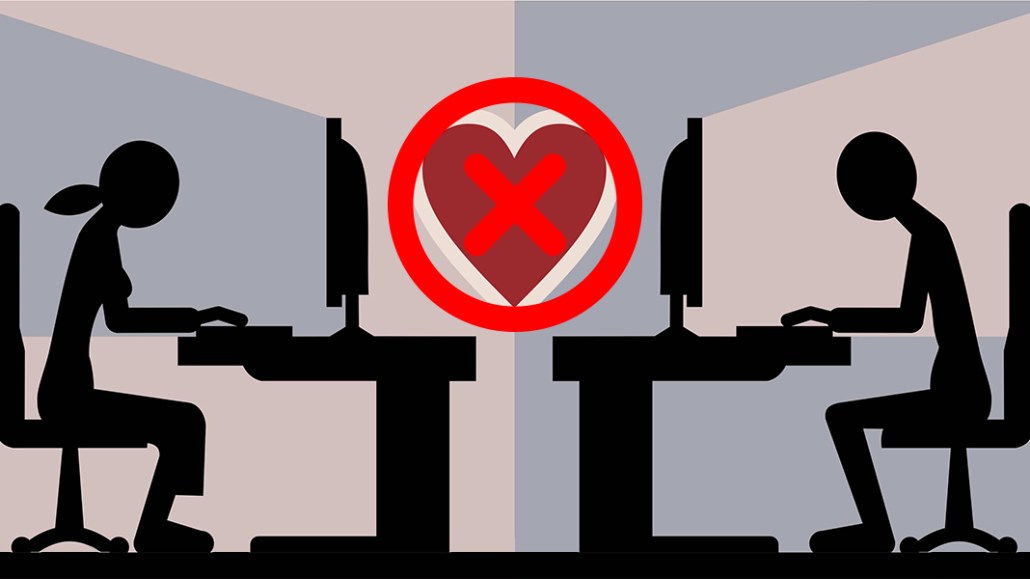 The #MeToo movement has led to high-profile departures across the business world and a re-examination of workplace processes. In the ad industry, which has seen big-name exits such as Gustavo Martinez at JWT, Joe Alexander at The Martin Agency and, just this week, Mike Germano at Vice Media’s Carrot Creative and Ted Royer at Droga5, policies on interoffice dating are getting a new look.

Digiday spoke with a combination of 23 agencies, human resources consultancies and marketers, several of whom asked to remain anonymous due to the sensitive nature of the subject, about their existing or nonexistent dating policies. Across the 11 ad agencies Digiday spoke to, views vary on whether they should enforce a dating policy or if one would have any effect on sexual harassment. Out of the 11 ad agencies, five agencies have dating policies and are revisiting them. Six agencies say they’ve have never had such a policy, and they question their effectiveness.

“Dating policies are not a new phenomenon, but with the renewed conversation around harassment in the workplace, we are seeing ad agencies take a moment to consider whether they need one or how they might update one,” said Annick Miller, director of HR consulting at Namely, an HR software platform that also consults on companies’ HR strategies.

“We’ve been thinking about adding a dating policy,” said one HR director at an independent ad agency, who requested anonymity. “Not that we have a large issue with dating, but we want to do everything we can to make sure we are protecting ourselves when it comes to situations that could open ourselves up to sexual harassment issues.”

Other independent agencies that have dating policies are looking into aligning them with their sexual harassment policies.

For instance, two months ago, one HR director said its agency changed its dating policy to include a reference to sexual harassment. It now states that “supervisors cannot date subordinates under any circumstances because it can compromise the ability to enforce the sexual harassment policy.”

Ad agencies can seem like breeding grounds for relationships. Employees work long hours, work closely together in small teams and attend lots of parties where alcohol is abundant. Many times, healthy relationships develop. Other times, such an environment can lead to what one junior agency employee calls a “cesspool.” This person said several fellow employees have dated each other, and everyone is aware of it. Another agency employee said office relationships create drama and distract from work.

Many agencies are OK with employees dating each other as long as their work isn’t impacted. On the extreme end is a “non-fraternization” policy that bans employees from dating at work.

The most common cause for concern is with manager-subordinate relationships, which is why at Omnicom agencies such as BBDO, DDB and TBWA, office dating is permitted as long as neither person has authority over the other.

At Interpublic Group agencies, such as The Martin Agency, R/GA and McCann, all employees are supposed to abide by a code of conduct that threatens “disciplinary action” if employees do not report a relationship where one party has authority over another, according to an IPG spokesperson. The spokesperson said fears about sexual harassment “absolutely” play into the policy.

Policy or not, relationships between supervisors and underlings are inevitable. In part given that reality, while most holding companies have dating policies that extend to their agencies, six of the eight independent agencies Digiday spoke to have none at all. At Los Angeles-based independent agency Dailey, “the expectation is that things be handled professionally and that it be nondisruptive,” said Heidi Williams, svp and director of HR there.

It’s a similar case at independent agency RPA, said Laura Small, vp and human resources director at RPA. “People work very closely with each other for extended periods of time,” she said. “There are lots of opportunities to socialize. Personal relationships are part of the fabric of advertising and communication.” Small acknowledged that junior-manager relationships can “get complicated very quickly,” but said a dating policy isn’t the solution.

There is data that backs up this thinking. According to CareerBuilder’s annual survey published last week, out of 809 workers surveyed across industries, 22 percent of them have dated their boss, up from 15 percent last year, and 41 percent of them had to keep their romance a secret.

It’s questionable how effective the dating policies are at holding-company agencies.

“Holding companies drag out those corporate policies the moment the media gets hold of the fact that someone is suing them,” said Cindy Gallop, previous chairman of BBH, founder of MakeLoveNotPorn and an advocate of gender equality. “They are used purely as protection.”

Employees might not even be aware if dating policies exist at all. Of the eight ad agency employees Digiday spoke with, six employees had to check with their HR director to find out whether or not their agency had a dating policy. One account manager at a well-known agency said imposing dating policies can be difficult to do at agencies. “Everyone wants to believe that agencies are full of cool young people and anything goes,” this person said.

“What agencies need are living and breathing policies that are part of an agency’s culture and communicated clearly,” said Gallop.

Small agreed. Instead of writing up a code of conduct, she said agencies need to make actionable efforts to get the message across to their employees. Barbarian agency not only has a dating policy everyone signs and reads, but it also has a lawyer come in every six months to speak to the agency about sexual harassment in the workplace and how supervisors should not date subordinates.

This past Monday, RPA held a training around sexual harassment for all its officers that went over best practices for dating in the office. “It’s not about a policy,” said Small. “It’s about a way you conduct yourself. It’s about education.”