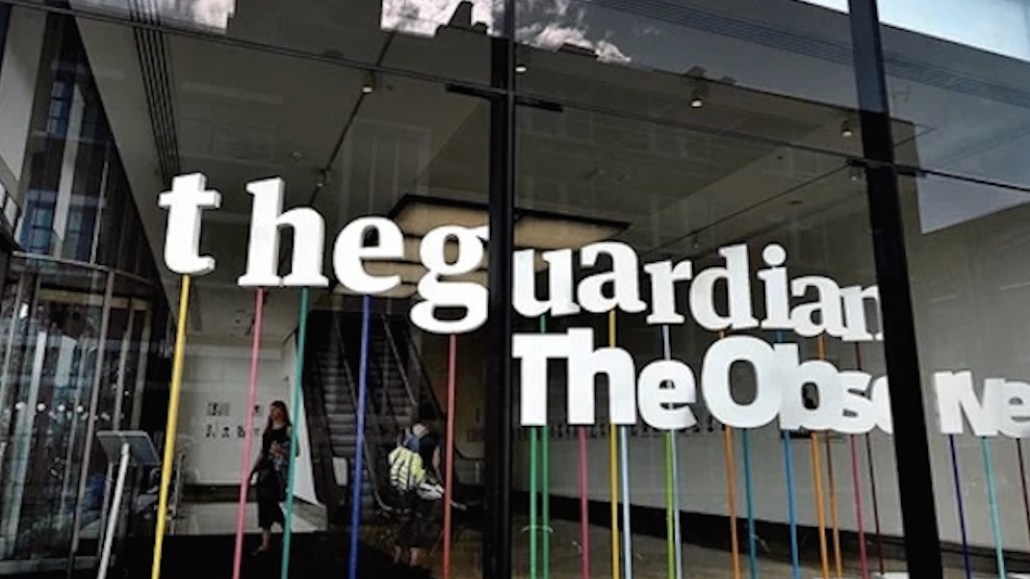 The Guardian won Publisher of the Year at the Digiday Awards Europe last night, one of seven organizations honored in the Grand Prix category.

Decided by public vote, Publisher of the Year honors the publisher that best displays original thinking, creativity and overall excellence in its approach to publishing and media across all editorial efforts. In the last 12 months, the Guardian has pivoted away from advertising-focused revenue to a reader-focused revenue model. This has paid off, as Jess Davies writes in a new Digiday feature.

“We’re making great progress with our three-year strategy and on track to break even by 2019,” said Guardian Media Group CEO David Pemsel. “The media sector remains challenging. However, our reader revenues are growing well, our advertising proposition remains strong, and more people are reading us than ever before — we now reach over 150 million unique browsers each month, and we have over 800,000 supporters.”

The Digiday Awards Europe recognize the publishers, advertisers and technology platforms bringing about change and innovation in the European market. View the full list of winners and check out their work below. You can also see the winners of the Digiday Content Marketing Awards Europe, which were announced at the evening’s gala as well.

Best Use of Multimedia
Vice Media and Chanel – “The Fifth Sense”
In this video series, which ran on Vice Media’s youth-oriented vertical i-D, women creatives from a variety of disciplines shared their work, processes and perspectives. Then, they created a project for “The Fifth Sense,” inspired by Chanel’s Chanel No. 5 L’Eau fragrance. See the full series here.

Best Native Advertising Campaign
Venatus Media, Mindshare, Rovio and Radox – “Venatus Angry Birds”
Based on the enduring success of the mobile game “Angry Birds,” personal hygiene brand Radox created its own game to promote its newest line of shower gels, Scent Touch. In the game, players use the familiar “Angry Birds” slingshots to release shower gels, a play on the campaign’s tagline: “Released by touch.” Play the desktop game here.

Best Use of Social Media
AnalogFolk, Giphy and PG Tips – “Morning Moods”
To connect PG Tips’ black tea portfolio to how tea drinkers feel when they wake up in the morning, digital creative agency AnalogFolk created a series of GIFs, in partnership with Giphy, featuring the brand’s iconic Monkey in a variety of moods, ranging from ecstatic to grumpy. View all of Monkey’s morning moods here.

Best Programmatic Advertising Platform
Quantcast – Quantcast for Brands and Agencies
In an often confusing and cluttered media landscape, technology company Quantcast positions itself as a partner to brands and agencies eager for brand-safe environments.

Best Branded Content Series
Channel Mum and Iceland – “Power of Frozen”
Frozen food brand Iceland had a brand-imagery issue: It was perceived as low-quality food with little nutritional value. With the help of parenting platform Channel Mum, Iceland worked with a variety of family influencers to show that Iceland products are both healthy and cost-effective. It has produced over 100 pieces of branded content with Channel Mum, with more to come.

Best Publishing Platform
Ve Global and Athletics Ireland – The Dublin Virgin Media Midnight Run
After a successful Great Dublin Bike Ride, Athletics Ireland turned once again to Ve Global to increase sign-ups for the Virgin Media Night Run, which is a course run through Dublin’s city center. Ve Global used its suite of capabilities in on-site engagement, programmatic display and email remarketing to increase sign-ups. See how the night turned out below.

Breakthrough Creative
Weber Shandwick and ActionAid UK – #BrutalCut
Three million Kenyan girls are at risk of female genital mutilation. U.K. charity ActionAid enlisted the help of agency Weber Shandwick to draw attention to the effects FGM has on girls’ lives. Popular vloggers and publishers “cut” their video content with a short message from a Kenyan girl at risk of FGM. The effort helped ActionAid secure millions of pounds in funding to create safe havens for girls at risk of FGM.

Agency of the Year – iProspect
iProspect has brought digital chops to a variety of leading European and international brands, including Eurostar, John Lewis, Diageo, Santander and Specsavers. See how the agency delivered for Eurostar below.

Publisher of the Year – The Guardian
The Guardian’s move to a reader-focused revenue model after years of struggling to break even seems to be paying off. According to a report by The Economist, the newspaper will hopefully be back in the black by next year.

Consumer Campaign of the Year – PMG and Beats by Dre: “Be Heard”
Beats by Dre is well-known in the U.S., but its agency PMG wanted to extend brand recognition into Europe, too, specifically in the U.K. PMG tapped into British sporting culture by collaborating with Sky Sports, the broadcaster of the Anthony Joshua-Wladimir Klitschko boxing match. With access to Sky Sports’ production process, PMG was able to deliver a brand experience that closely linked Beats by Dre to Joshua’s victory.

Video Team of the Year – Unilad
What started in a Manchester, England, bedroom in 2015 as a content curation vertical on Facebook has turned into nine channels, including tech, food, sports and lifestyle, of original content production. Unilad is Facebook’s most engaged page globally, according to Forbes. (Soccer player Cristiano Ronaldo’s page comes in second.)

Content Studio of the Year – Twitch Custom Solutions Team
Live video is a prospect that would scare even the hardiest of brands, but Twitch has worked hard to educate potential clients about its comment moderating system and ensured that gaming influencers resonate with the brand’s target audience. The approach has helped Twitch expand its client portfolio, which includes both gaming- and nongaming-adjacent brands.

Brand of the Year – Benefit Cosmetics
In 2017, Benefit Cosmetics distinguished itself from other beauty brands by reaching out to an underrecognized segment: mothers. Collaborating with influencers on the Channel Mum platform, it created the series “Wake Up to Makeup,” which included makeup tips specifically for busy mothers. See the case study video for the partnership below.