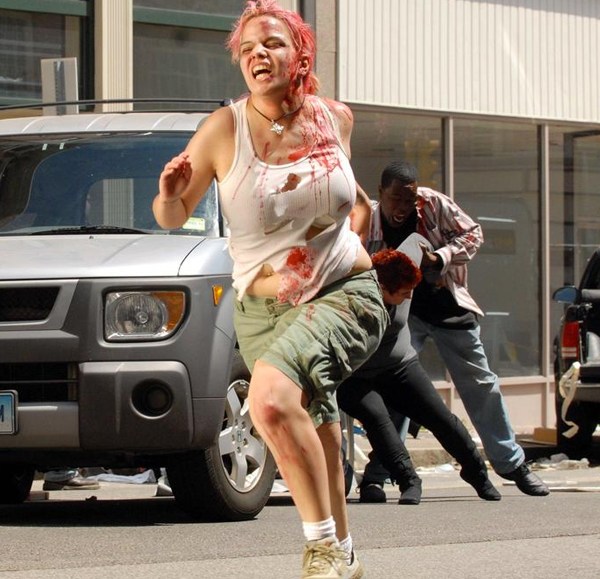 NBC Universal’s horror network Chiller is jumping on the slow-shuffling zombie bandwagon with the launch of the movie “Remains,” which premieres on Dec. 16. To promote the upcoming Steve Niles movie and to provide a boost to Chiller.com, the network will roll out the first of three Webisodes tied to “Remains,” which will serve as a prequel to the world-in-chaos-themed movie.

“Remains,” like AMC’s smash hit “The Walking Dead,” is based on a popular graphic novel of the same name written by Niles (30 Days of Night). It marks the start of a series of original projects for the three-year-old network, which has spent the past year refining its brand after NBCU executives decided to put Chiller under the management of sister network SyFy.

The movie takes place in Reno, Nev., where a radioactive blast has unleashed a horde of zombies and a group of survivors takes shelter. The Webisode, titled “Remains: Road to Reno,” provides viewers with a look at the survivors’ lives before and leading up to the zombie epidemic. The three Webisodes will run a total of 11 minutes.

At least initially, the “Remains” Webisodes are not being seen as a big moneymaker for SyFy, said Thomas Vitale, head of programming for both Syfy and Chiller. Instead, the Web shorts will be used to promote the series and more importantly help move Chiller.com beyond its current position as a pure promotional site toward more of a content destination. Until now, the site has streamed some old series episodes but has been mostly devoid of original content.

“We wanted to build the Chiller site and build a bit of buzz,” said Vitale. Given Chiller’s young, horror-loving demographics, “It would be a wasted opportunity to not turn it into a content site.”