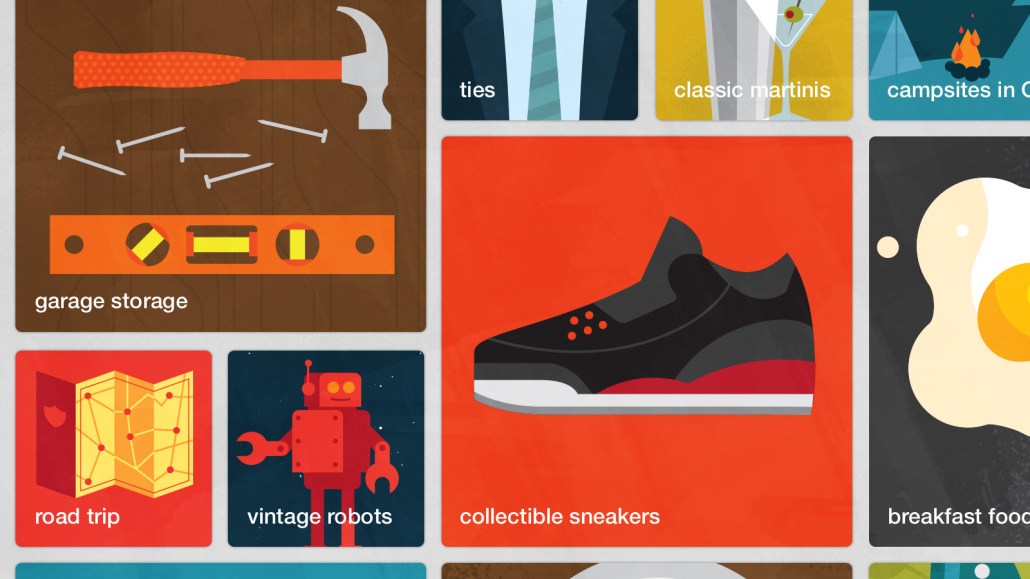 On Pinterest, Paul O’Connor is the exception to the rule. He’s a regular pinner who thinks the site’s image-centric gestalt is ideal for organizing and storing the comic book art he also shares on his blog Longbox Graveyard. He has posted more than 5,700 pins in nearly two years on the service and has accumulated more than 3,300 followers. But as his profile tagline shows, he’s well aware he’s outlier: “Fighting a one-geek war against handbags and hairstyles on Pinterest!” it reads.

Despite recent gains with men like O’Connor, Pinterest is still very much a woman’s world, especially compared with other major social networks. While other social giants like Facebook, Twitter, Tumblr, Foursquare, Snapchat, LinkedIn and Instagram have achieved a relative gender balance among their respective user bases, Pinterest’s is still overwhelmingly female.

“If you pull up Pinterest and go into any content section, you will see purses, dresses and women’s shoes because women are the user base,” DigitasLBi’s vp of social and content strategy, Jill Sherman, said. “When 70 percent of the users are female, then 70 percent of the content is going to be female-oriented.”

ComScore data showed that Pinterest is the most gender imbalanced of the major social media networks, as 71.4 percent of its users are female as of December 2013. It’s slightly more balanced than in February 2013 when Pinterest was 73.8 percent female, but it’s still significantly different than the other big social networks. 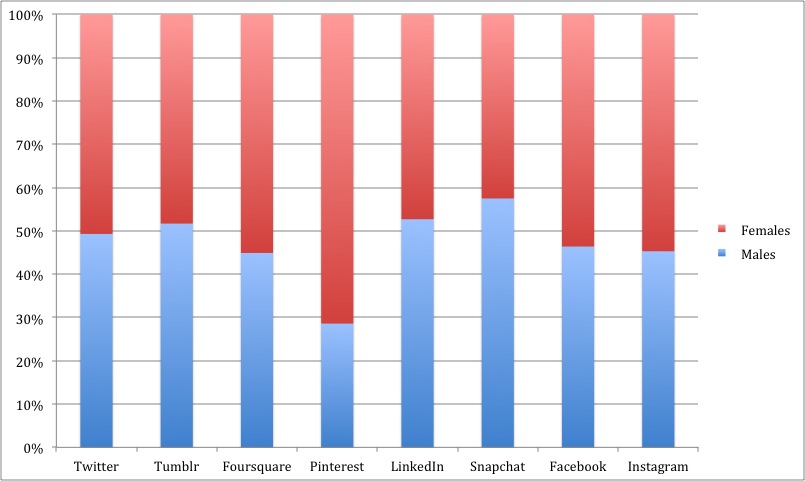 Still, this hasn’t discouraged a slew of upstarts from launching Pinterest knockoffs specifically geared towards men.

In March 2012, Brandon Harris co-founded Dartitup, “darts” being the manly stand-in for “pins” in this instance. Dartitup’s audience grew in its first year, but Harris, a digital retention manager at tax-preparation firm Jackson Hewitt, hasn’t quit his day job yet.

Dartitup’s traffic has stagnated over recent months, he said, averaging between 200,000 and 400,000 pageviews a month. The site generates enough revenue to pay for itself, but it remains a side project.

“Scrapbooking is not something that’s natural to guys,” Harris said. “When you think what girls use Pinterest for, they put together albums for weddings and ideas because they do that outside of Pinterest anyway.”

Unlike with Pinterest, which emphasizes saving images for later perusal, a majority of Dartitup’s most successful posts are comedic and ephemeral in nature. A typical Dartitup album consists of memes, Harris said. “Or it’s a collection of beautiful women.”

Dartitup isn’t the only site to have difficulty building a manlier Pinterest. Dudepins, Manteresting, Punchpin (which is NSFW), Gentlemint and Tapiture all made headlines in the past two years. So far, only Tapiture is tracked by comScore, which reports that its traffic decreased from 259,000 in February 2013 to 186,000 in December 2013. The drop came after Tapiture’s traffic spiked to 307,000 uniques in November, suggesting its one of the many “social” sites  that took a hit from Facebook’s recent algorithm tweak, according to comScore marketing insights analyst Adam Lella.

Tapiture CEO John Ellis disputed these figures, saying uniques actually increased from November to December and again from December to January, and that its e-commerce business earned “seven figures” in just eight months in 2013. Tapiture’s audience is approximately 75 percent male, he added, and its content is edgier.

“We are very attractive to the large group of ‘Pinterest orphans’ — people who are 25 to 34 years old, live in metropolitan markets and don’t connect with Pinterest’s content,” he said in an email.

Pinterest is making a concerted effort to diversify its own user base via a handful of new features including pins curated around a specific interest like men’s fashion and an easier way to save articles, according to a Pinterest spokesperson. The new features appear to be diminishing the gender gap. Pinterest has become more gender balanced while increasing its overall traffic, suggesting most new users are males. Pinterest’s monthly unique visitors increased from 41.2 million in February 2013 to 52.2 million in December 2013, according to comScore.

But Pinterest’s efforts to court men could alienate its mostly female base of users. As Facebook’s recent struggles with retaining younger users shows, trying to impress the masses can mean neglecting the core.

“Pinterest’s design proved itself to be valuable among its user base, and it just happened to be predominantly female,” Sherman said. “I’m not sure they need to deviate from that model.”