Q&A: The Washington Post’s new publisher on his ‘high-altitude’ view 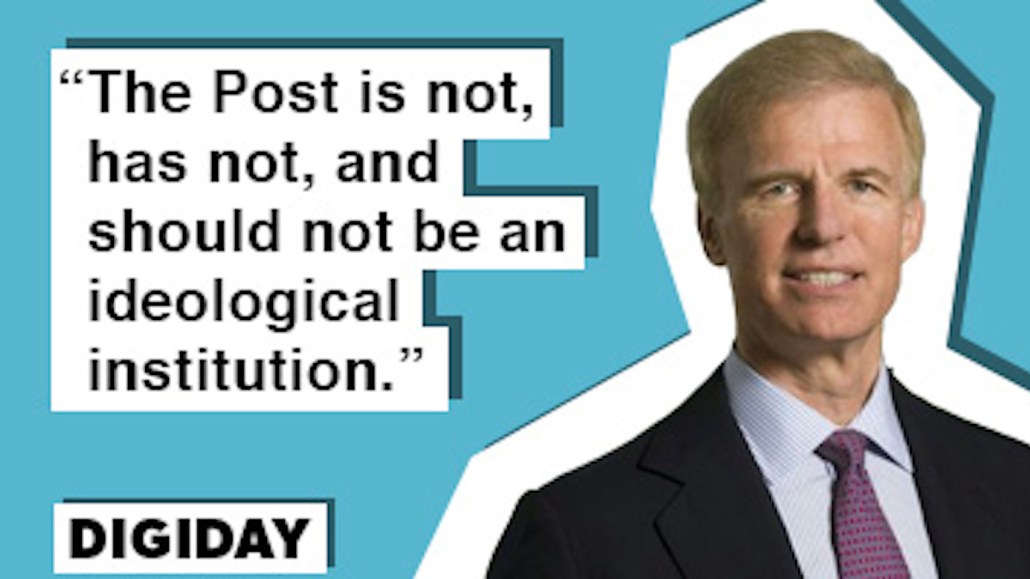 In selecting Fred Ryan as the new publisher of The Washington Post, owner Jeff Bezos has effectively cut the paper’s final ties to the Graham family. Ryan succeeds publisher Katharine Weymouth, a granddaughter of long-time Post publisher Katharine Graham, who will step down on Oct. 1.

The former president and CEO of Allbritton Communications, Ryan helped invent Politico, which disrupted the Beltway media scene with its fast and aggressive coverage. He has a heavy task in front of him at the Post, though, with its shrinking legacy business. Ryan said it was too early to provide specifics about his plans, but emphasized his support for editorial and the need to continue to innovate at the 136-year-old paper.

Ever since Bezos bought the Post, people have been looking to clues from him as to what he plans to do with it. What do you think your selection says about that?
Much of what I know about the Post is what I’ve seen as an observer — great progress, terrific hires in the newsroom, increased traffic, innovative blogs and other products. All I can give you is a high-altitude view: It’s to continue the growth strategy and in the landscape we’re in right now. I’m very much focused on continuing the innovation that’s started with these interesting blogs and other products and trying to look ahead at what the needs are and how can we meet the expectations of the news consumer.

After having built something new in Politico, why did you want to run a legacy news organization?
The pace of change in media is so fast, and increasing in speed, that whether you’re part of a recently launched publication — Politico’s 8 years old — or part of an established news organization, the change is affecting all of them. Anybody in the media business has got to embrace that things have changed dramatically and will continue to change at an accelerated pace. There’s not as much of a distinction between new media and long-established media players.

What can old media learn from those newer players?
If you look at new media, recent entrants have at least started at the current state of technology. Look at several traditional media companies — many of them were built for the desktop. It’s rapidly moved to tablets and smartphones. Those who had the assumption it was going to be a desk-side screen need to rethink their business models.

Bezos is known for making intriguing business decisions, but not necessarily immediately profitable ones. What’s your mandate from him?
When he spoke to the Post’s staff when he acquired it, he made his views very clear: it’s to experiment, to think long-term, to give the experiments a chance and hopefully prove successful. To think not just about the news consumers today but the future readers and be able to adjust to change.

How do you keep up on digital trends?
I go to dozens of websites multiple times, but I start the day with the print version of the Washington Post. I downloaded a number of new apps, and if I’m in line at Starbucks or Chop’t Salad, I try to put myself in the place of the consumer. I think it’s important for all newsrooms to be mindful of the consumer experience.

Earlier in your life, you had a role in the Reagan administration. Where does political ideology fit at the Post?
I enjoyed the chance to serve in the White House. It’s a very unique opportunity. But for the last 20 years, I’ve been involved in the news business. My absolute position is to have high-quality journalism. The editorial team at the Post does a terrific job, and I plan to support them as they need it. The Post is not, has not, and should not be an ideological institution. It’s a world-class organization of the highest standards and should continue to have an independent newsroom that’s objective in its coverage.