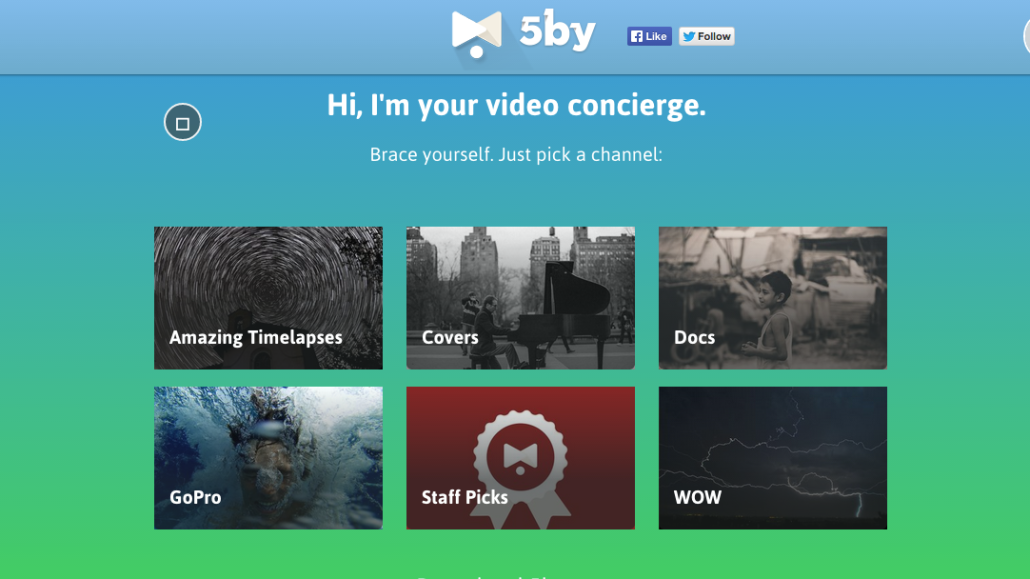 The next frontier for media might just be messaging.

Montreal-based 5by plans to introduce its own messaging product next week, with one key difference from those aforementioned apps: Its new platform lies at the nexus between messaging and Web video.

“People do not want to broadcast everything on Facebook; they just want to easily send things to people they care about,” 5by CEO Greg Isenberg told Digiday. “We leverage this behavior to make it easier for people to find, share and discuss videos.”

5by currently operates a video-discovery platform, which serves up high-quality Web videos to desktop and mobile devices. That’s not going away, but 5by will relaunch the app next week to incorporate new sharing and messaging features. The new 5by will enable you to share videos you watch inside the app itself, in something 5by calls the video inbox. Attached to each share is a conversation thread, in which up to 12 participants can chat about the content — or whatever else comes to mind — in a space below the video player.

“The reason we limit conversation to 12 people is because that’s the maximum amount of people you can have at a dinner table,” said Isenberg. “The quality of the conversation is really important to us.”

StumbleUpon-owned 5by has drawn comparisons to music app Songza, which curates audio playlists. 5by acts as “your video concierge,” serving up categories like “Music Lovers” or “Sports Fan” that lead to a more granular set of options, like “Climbing,” “Ski & Snow” or “GoPro” (within the sports section). A context-aware algorithm generates the video playlists for each selection — it’ll select longer content at night, for example — but 5by’s editorial team vets each piece of content for quality before it enters the system.

“A bad image is a millisecond of your time. An animated GIF is three seconds of your time. But if you show someone a 15-minute documentary and they don’t enjoy it, they’re going to be left with a bad taste in their mouth,” said Isenberg. “That’s why we decided, forever, in the DNA of our company, there will be an editorial team.”

5by draws “hundreds of thousands” of daily video plays across iOS, Android and the Web, said Isenberg, who declined to disclose more specific engagement or user-base figures. Whatever engagement is now, the inclusion of in-app sharing and messaging features is a clear attempt to boost it, encouraging people to return to the app more often. But Jackdaw Research analyst Jan Dawson is skeptical the new features will have a strong draw.

“The messaging space is pretty fragmented today; lots of people out there use messaging apps to communicate with different people, but it’s pretty easy to dip in and out of them,” said Dawson. “Video content is not conducive to multitasking, so it goes against the whole way that people are using messaging now. Video is a much more immersive, single-task experience, so I’m not sure combining messaging and video works all that well as a model.”

Folks can still share 5by content through their social network of choice, email or SMS. But given the popularity of SMS sharing — nearly two-thirds of 5by’s mobile content shares are through text messages, according to the company — Isenberg thinks the video inbox makes a lot of sense, offering a better user experience within the app itself.

“There’s an open spot for the de facto video discovery and sharing platform,” said Isenberg. “We want that inbox to be your home for video. It shouldn‘t live in multiple places.”

The 13-person 5by team has yet to arrive at a monetization model, but content partnerships are one promising route. It has brokered three so far, with Vice, Defy Media and the Tribeca Film Festival.

“The first thing we look for in partners is really great content,” said Andrew Levine, head of partnerships at StumbleUpon and 5by. “The original 5by experience is the best from all over, but giving people the best of the best for a particular brand or publisher also works really well, even if they’re catered to slightly different audiences.”

Isenberg declined to discuss the financial details of those partnerships but noted that StumbleUpon, which acquired 5by in September 2013, is a profitable company, giving 5by plenty of time to experiment with features like messaging before it monetizes.

“Ultimately, if we become the de facto place to find and share videos, there’s a million ways to skin the cat in terms of how to monetize it,” said Isenberg. “For now, it’s really about building the community.”