GroupM has run carousel ads for NBC Universal, Pandora jewelry, Nestlé’s Lean Cuisine, AB InBev’s Stella Artois, Unilever’s Hellmann’s and Panera Bread, according to Kieley Taylor, GroupM head of paid social. Carousel ads featuring the NBC Universal film “The Secret Life of Pets” were clicked on 22 percent more often than Twitter ads for other entertainment companies were clicked on, on average. And the “cost per engagement was 6 percent lower than the industry benchmark,” she said.

Omnicom confirmed that it has run carousel ads. “We like the ability to promote brand-created, influencer-created or consumer tweets within a single experience to tell a better story,” said Kerry Perse, U.S. director of Omnicom subsidiary OMD Word.

The ads allow brands to aggregate multiple tweets into a carousel format that users can swipe through. Advertisers have been excited about the ads since news of their development broke in January. And in June, Twitter officially announced it was testing them out. But a few agencies reported that it wasn’t clear to them if the ads were still in pilot or if they had been opened up to all advertisers.

“There is a general lack of awareness around the new unit,” said Karan Dang, digital creative director at 180la.

While several agencies were under the impression that the ads were open for business to all advertisers, the ads are still in testing and only available to a limited number of partners, according to a Twitter spokesperson. A few agencies Digiday spoke with said they don’t plan to run the ads regardless of their availability. However, others were intrigued, and media-buying giants Omnicom and GroupM have already run carousel ads that elicited encouraging engagement.

The video below shows how the ads look on Twitter.

Agencies Isobar and Red Tettemer O’Connell and Partners said they don’t plan to run carousel ads because they preferred other Twitter products, such as conversational ads and Moments, for real-time marketing. But Cari Weisberger, director of media services at Traction, said her agency is “definitely considering” using carousel ads in the future. And a spokesperson at 360i said their agency is in the early stages of developing a carousel ad campaign.

Still, with GroupM receiving encouraging feedback, Taylor expects to run more carousel ads. “Those who scroll through to the second image tend to stick around all the way through,” she said. “We find it to be a reliable leading indicator that there’s an engaged audience looking to learn more about our products.” 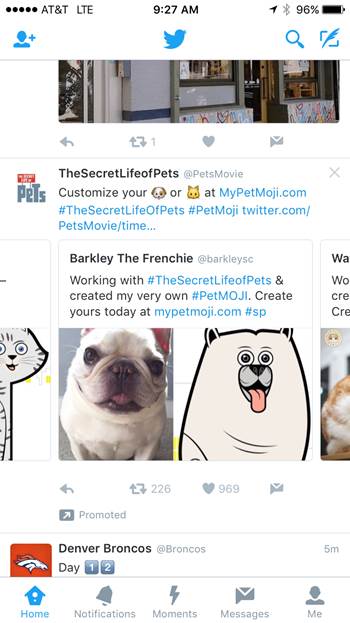