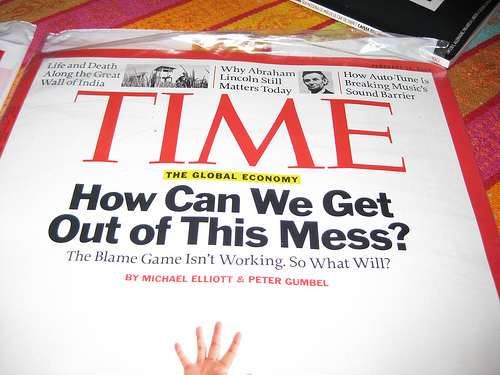 Time Inc.’s Digital Content NewFronts pitch had special significance; not only was it the publisher’s debut at the event , but it took place as the company prepares to spin off from Time Warner and become an independent publicly traded company. The pressure was on top brass to show it’s transitioning its traditional publishing model for the digital age. So the pitch was as much about positioning Time Inc. as a new, entrepreneurial content company as it was about introducing its new digital video.

The pitch
Time Inc. previewed upcoming new daily series that are tied to existing brands, including 120 Sports, a fast-paced digital sports program; People Now, a new entertainment show; and The Chat, from Fortune. Time Inc. brands have traditionally operated in silos, so, notably, the company is now trying to exploit its portfolio with new series that fit with a cross-section of titles, like Eyesore, starring Rachel Dratch and Alec Holland; I [heart] My Closet starring Jordana Brewster; The Climb. Time Inc. also introduced The Daily Cut, a new site and mobile app that will let viewers find all Time Inc. video in one place.

Prospects for success
Time Inc. is known for its broad portfolio but not for making it easy for advertisers to leverage that breadth, so the audience heard a lot about how the company is making it easier to buy and measure the ROI of its video. Apart from using the usual distribution channels, Time Inc. is betting on The Daily Cut and its built-in reach of its existing brands and their social channels to amass audiences quickly.

The scene
Master of ceremonies at the event at The Hudson Theater off Times Square was Jess Cagle, editorial director of two of its best-known brands People and Entertainment Weekly, who introduced the new and existing series. The event capped off with an ear-splitting performance by Southern rock band St. Paul & the Broken Bones, which first appeared at Time Inc.’s Southern Living Biscuits & Jam concert series.

Notable quote
“We have top-flight talent. We know what we’re doing, and we’re really easy to work with.” — Mark Ford, evp of advertising, Time Inc.

Buyer reaction
“They’ve got great focus. I felt it was organic to their brands; it was a really nice menu,” said Brenda White, evp, Starcom. “The more content the better, and the flexibility is really going to resonate with clients.”