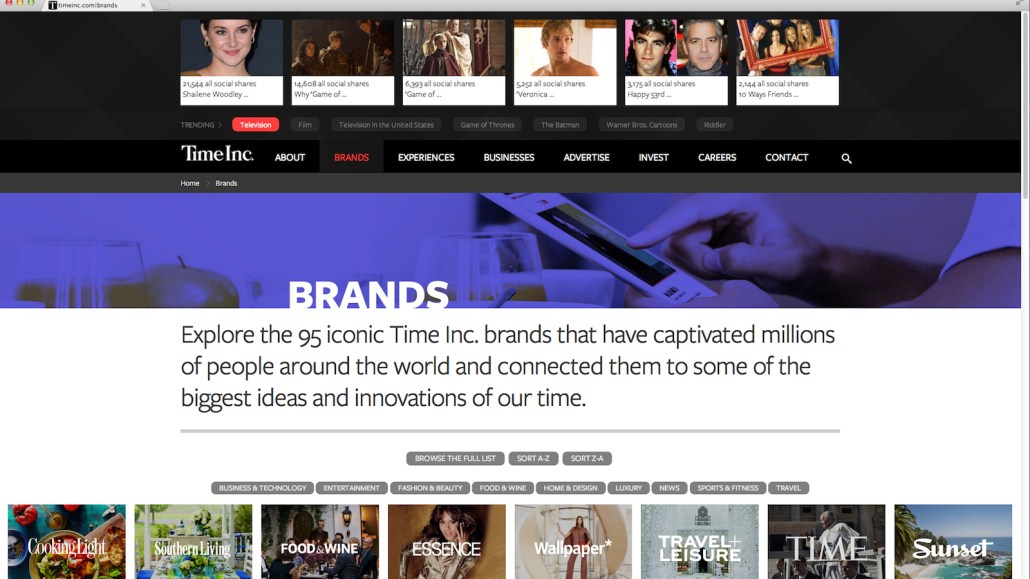 Corporate sites are generally the backwater of Web design, the digital equivalent to the brutalist architecture of sprawling Eastern Bloc cities.

That could be changing. Time Inc., preparing for its investor roadshow ahead of its spinoff from Time Warner, is taking the wraps off on Friday of a brand new design that has the modern visual aesthetic and appeal of a consumer site.

“With the company spinning off from Time Warner, it’s almost like our cotillion calling card,” said Colin Bodell, who became evp and chief technology officer for Time Inc. in January and who, as an eight-year vet of Amazon, has long been around good Web design. “We’re going to be much higher profile when we’re separated. It’s putting our best foot forward.”

Time Inc.’s disparate content makes it hard to generalize about, which can be a liability when explaining the company to advertisers. Rivals have simpler stories, like Meredith Corp., which has a laser focus on reaching women; and Condé Nast, a purveyor of luxury lifestyle. But Time Inc. has everything from hard news (Time, Fortune) to entertainment (People, Entertainment Weekly) to lifestyle (Southern Living, Real Simple). There are weeklies and monthlies, targeted to both men and women.

The new, mobilely responsive site attempts to embrace that range. A sizzle reel showcasing the brands’ activities takes up the majority of the home page, the work of design firm Global Moxie.

“There’s a depth and breadth to our content that I don’t think everybody fully appreciates,” Bodell said.

Each of Time’s 23 U.S. magazine brands has its own page complete with a big “hero” image, promotional stats and leadership information. Time Inc. also is using the site to increase familiarity with its 70-plus magazines in the U.K. and elsewhere overseas. “People don’t know we own Horse & Hound — that’s a gap in their life,” Bodell deadpanned. Time Inc. has replaced much of its top leadership with new people, and they’re pictured in large, friendly environmental shots that replace the all-business head shots.

Bodell said he intends to use the site as a testbed for new technology, too. The first example of this is One Bot, which Time Inc. developed in house and which it plans to roll out across its brand sites. One Bot pulls in the most socially trafficked content in its portfolio by brand and by topic, which is displayed across the top of the corporate site. (One Bot has the ability to do the same for non-Time Inc. brands, which presumably could be of use to the company’s editors.)

Beyond the glitz, the site is designed to be utilitarian to media buyers, with media kits and advertising information by platform. There’s also information on the company’s other businesses, like Synapse Group, a subscription-targeting service; IPC Media, the U.K. publishing business; and Content Solutions, its content-marketing division.

Time Inc.’s print magazines are still the engine that drives its business. But like all traditional publishing companies, the company wants to be known for a lot more than that, as shown by efforts to extend its brands to consumer products and multiple media platforms, including video (which Time Inc. is just getting started with in a big way, and doesn’t yet figure big on the site). The site is an attempt to extend that thinking, so “brand” has replaced “magazine.”

“We’re referring to these as our brands,” corporate spokeswoman Teri Everett. “It’s kind of limiting to refer to them as just magazines.”

Michael Lampert, managing partner at MediaCom, said he expected content to be a big focus of the new site “because Time Inc. is synonymous with content. It is their brand, and while others work to create engaging content, it is their essence as a publisher. Their industry is changing (away from the newsstand), and they have already been forward thinking in how they have brought their content to market across devices.”

The expectations for corporate sites in general have grown as consumers demand to know about the corporations behind the goods they buy, while media companies need their sites to reflect the changing landscape they’re operating in.

“Publishers need to look and act more like agencies,” said Joe Zeff of Joe Zeff Design. “Their websites have to work harder. They’re not just for investors, reporters and job candidates anymore. They’re now storefronts for native advertising and other partnerships.”