Who’s winning at politics news on the Web

Love him or hate it him, Donald Trump’s presidential run has been good for politics sites.

Traffic to the top politics sites has increased 63 percent in the last two years, per comScore, as this is a particularly nutty election year, with more publishers optimizing their coverage around the captivating campaigns of Donald Trump and the equally tenacious Bernie Sanders.

In the race to be the go-to politics news source this year, here’s how the top-ranked comScore politics publishers stack up.

CNN and Huffington Post are winning the traffic game.
The presidential race has been good to the Huffington Post and CNN. The two sites have seen some major traffic growth since the middle of 2015, with Huffington Post at 25 million uniques slightly edging out its competitor in December, said comScore. The devil’s in the details, though. Some of The Huffington Post’s politics traffic is actually to its “Good News” section, which it’s categorized under the politics vertical. CNN contends this makes it, not The Huffington Post, the “the Web’s number one source for actual political news,” according to a recent press release. (Emphasis theirs.) 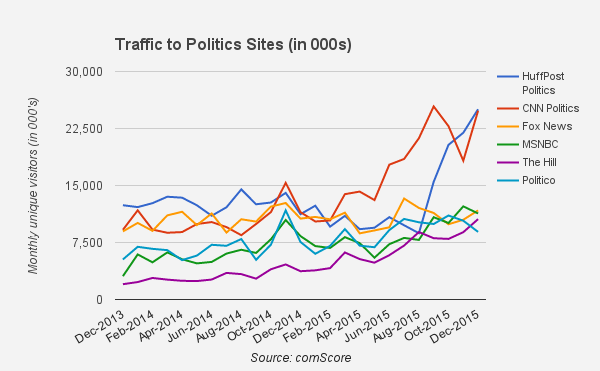 The Hill and Mother Jones are growing fast. 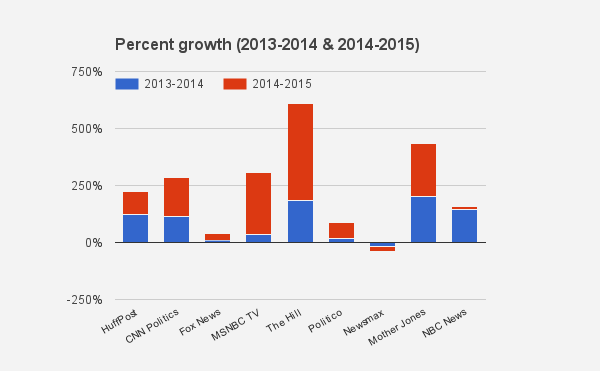 Traffic to the top politics sites on comScore has increased 63 percent over the past two years, but it has grown much faster at The Hill and Mother Jones, where monthly unique visitors have increased 425 percent (2 million to 10 million) and 232 percent (2 million to 6.6 million), respectively. For the Hill, which grew 184 percent in the last year alone, much of that growth is thanks to former Gawker viral wunderkind Neetzan Zimmerman, who joined The Hill last January. in all of these,  Mother Jones, too, has gotten smarter about social distribution. MSNBC has also seen its traffic grow significantly over the past two years.

The nature of Facebook means that people, particularly conservatives, are more likely to read and share articles that align with their own views, as Pew Research found in a 2014 report. That’s on display with the list of most-shared sites on Facebook, half of which have an ideological slant. While the Huffington Post is the most-shared site on Facebook, according to Newswhip, it’s joined by Rare (conservative), The Raw Story (progressive), Western Journalism (libertarian), Fox News and the right-leaning FederalistPapers.com.

Mother Jones attracts the most millennials; Fox News gets the blue hairs. 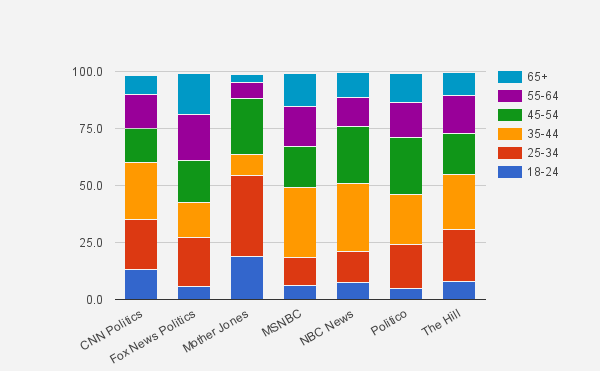 When it comes to reaching the most young people, it’s the left-leaning 40-year old Mother Jones that’s doing the best job. About half of the site’s audience is between 19 and 24. The rest of the top politics sites skew much older. Over 70 percent of visitors to Fox News, for example, are over 34. It’s a similar story at MSNBC, NBC and Politico, all of which also skew older. Fox News is even more pronounced, with 38 percent of visitors over 55.