Rodale is testing a new kind of online paywall, asking people, including those using ad blockers, to provide an email to unlock articles.

Since August, it’s been serving messages requiring people to enter email addresses to see content. They’re appearing on the sites of Rodale’s popular health and fitness titles, including Men’s Health, Women’s Health and Runner’s World, in front of what Rodale deems premium content, which could be nutrition tips or an exercise plan. (Rodale is using Bounce Exchange to blur out a portion of it, serve an overlay and collect email addresses.) Once a person submits an email address, Rodale sends them email newsletters and other offers.

“We don’t want to give all our content away for free. We want to understand if there are specific topics, types of content, referral sources — where do we see conversion happening,” said Beth Buehler, COO of Rodale.

Rodale is testing these popups on desktop and mobile; with people coming direct to the site or from other sources; and with people using ad blockers. Rodale is not requiring (or even asking) readers to turn off their ad blockers, as many other publishers have done. The flaw, of course, is that people can (and do) enter fake email addresses; Rodale says it weeds those out using detection analysis.

Publishers have woken up to the power of direct connections as a cornerstone of audience development strategies as platforms like Facebook increasingly prefer instead publishers put content on their platforms. Email has again become a focus at many publishers. Buehler said that in just three months, the email wall has produced 20 percent of all the new emails that Rodale will collect for the entire year (after weeding out the fake ones); and that she expects that figure to reach as high as 35 percent by the end of the year. “It’s an indication that people find value in our content,” she said.

Rodale’s approach is similar to tactics used by publishers including Epicurious, Forbes and The Washington Post. The Post and The Wall Street Journal also have tightened up their paywalls by preventing people from accessing articles for free when they come through social media or Google, respectively. 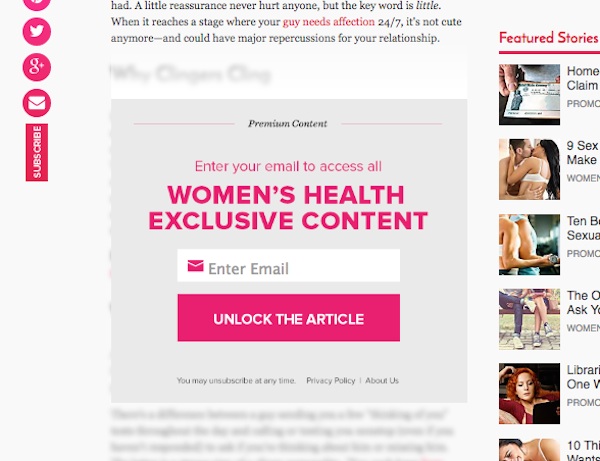 Putting more friction between the reader and the article could lead the reader to leave the site, though. Some readers will resent being asked to supply personal information, as The Washington Post found when it tried its email experiment.

“It’s incumbent on publishers to also take actions that invite rather than punish visitors, such as lowering page weights, removing unneeded scripts and other code, and, on the business side, using revenue mechanisms that don’t rely on served ads that are vulnerable to ad blockers,” said Dorian Benkoil, founder of Teeming Media, which consults to publishers.

Rodale’s tests are part of a broad effort to get more money from consumers. Earlier this year it dropped print ads from Prevention and raised the single-copy cover price and is working on putting the digital content behind a paywall. It sells Runner’s World training plans and plans to charge for Men’s Health workouts.