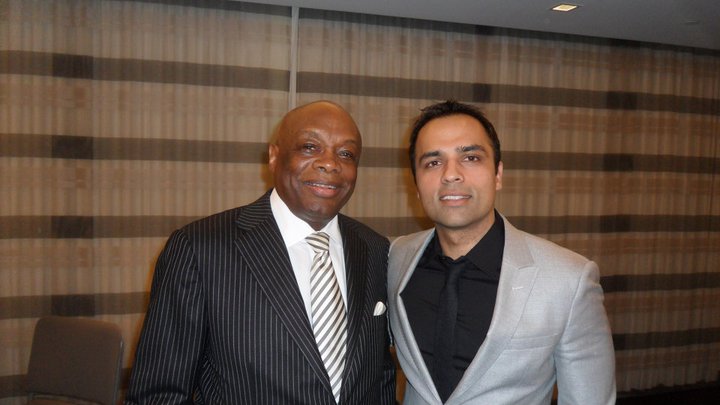 Pity RadiumOne. The company, by all accounts steaming toward an IPO, would like nothing more but to turn the page on its founder, Gurbaksh Chahal, who was forced out as CEO in late April after an online uproar over his pleading guilty to domestic assault charges.

That does not look likely to happen anytime soon. Chahal is busily preparing for the launch of a new company, which he has been teasing on Twitter as Gravity4, It is slated to launch on Wednesday at midnight. (The name, Gravity4, is presumably an allusion to its being the fourth company “G” has started.) But the new endeavor, billed on the Gravity4 site as a “high-frequency marketing OS,” is not the only interest Chahal has: Revenge is also on his mind.

On Saturday, Chahal posted a now-deleted blistering blog post on his personal site that promised litigation against his former board of directors, accusing them of sabotaging him after advising him to take the misdemeanor plea. In his post, Chahal wrote:

In the upcoming litigation there will be hundreds of other documents providing perspective on the greed, deception, and betrayal behind my termination. It will also shine light on how corrupt the human soul can become.

Chahal’s post included a link to a Dropbox with select emails from his case, including congratulatory and supportive emails from his board. It also, interestingly, included an email that board member Steve Westly sent to former San Francisco Mayor and California Assembly Speaker Willie Brown, requesting Brown speak to the district attorney about the case — and making note that RadiumOne could not file for an IPO and create more jobs until the case was resolved. In his blog post, Chahal wrote of Brown that “the board was pressing him on my personal matter.”

That’s not the way Chahal sees things, judging from his post. He blames the firestorm around his ouster with giving his father a heart attack, recounts alleged misdeeds in his firing, and demands an apology from the RadiumOne board for bowing to public pressure. “Although an apology can’t reverse what has happened, it would’ve helped clarify the distorted situation and help us all move forward – integrity intact,” he wrote.

The post appeared to be yet another unconventional, blistering move from Chahal, who has built a reputation as a grandstanding entrepreneur who has rubbed many the wrong way over the years. Indeed, a top RadiumOne exec I spoke to last month said the company was pleased to be rid of him — and it was a long time coming.

Chahal apparently had second thoughts– or was warned by his legal counsel — about the blog post. By Monday, it was deleted, along with the email documents.

Chahal has a new post up, however, which is more along the lines of the inspirational entrepreneur genre. It is titled “Thinking Big — the Only Way to Go.”

Chahal didn’t respond to my requests for comment. The text of his deleted blog post is below:

On April 16th, 2014 my board congratulated me. The Board of Directors for RadiumOne focused on an upcoming IPO and the financial rewards they would reap, and pushed me to plead guilty to two misdemeanors in order to resolve my personal matter and accelerate the IPO process. Ten Days later, I was terminated.

This was especially troubling given that the negative media attention was predicated on a misunderstanding of the facts of my political witch hunt: a strong statement by the Company that I was not convicted of any felonies, and, in fact, was placing the Company’s interests ahead of my own, would have defused the story. Instead, by terminating me, the Board actually fueled this general misconception. The media had a field day. This turned from local news to international news shortly after. My father even got a call from India, and by the time the story had traveled there, the media printed that I was sentenced to prison. He immediately had a heart attack. This now became extremely personal, since this was my father’s third heart attack and I could have lost him this time. Those newspapers have since, issued apologies and redacted their story.

First, and foremost, I don’t condone domestic violence and I wouldn’t expect anyone else to either. And, I apologize to anyone that I hurt in this process. This year has affected me greatly, both personally and professionally. I have not only maintained innocence but also transparency with my board since the beginning. This incident tested everything in my life. I at least had my integrity, my values and the truth. After the events that unfolded with RadiumOne, and the storm of horrible press, all three of these were publicly in question.

I have no other option but to pursue litigation. But, at the same time, I am closing this chapter of RadiumOne by exposing the dirty politics involved.

In the upcoming litigation there will be hundreds of other documents providing perspective on the greed, deception, and betrayal behind my termination. It will also shine light on how corrupt the human soul can become.

I’ve already sent dozens of these documents to the National Press as we file our litigation. But, here are a few interesting exhibits. http://po.st/nunY1h

On January 13th, 2014, my corporate counsel was researching to see even if I prematurely settled with a felony plea for the sake of the IPO, if they would need to even report it in an S-1 filing since it wasn’t a financial crime.

On January 18th, 2014, Steve Westly (one of my board members) reached out to Willie Brown (former mayor of San Francisco) for an update since he mentioned the board was pressing him on my personal matter, since RadiumOne could not go public without my issues resolved.

On April 16th, I shared with my board that most of my case was dismissed and the rest was headed for full acquittal if I had chosen to endure a longer legal process. But, to provide the “DA” an exit strategy, we agreed to a misdemeanor plea since the case had no merit. The board erupted in congratulatory emails.

On May 23rd, when I publically resigned from the board. That very evening, the board had a meeting and increased the stock option pool. The board granted millions of shares to enrich existing employees and management but to also alter the dynamics of corporate control by diluting me further.

I never build companies for financial gain. I’ve been blessed with a great family and the success thus far. I build them for creativity, jobs, and the thrill of making magic happen over and over again. It’s a sad thing, since all RadiumOne really needed to do was apologize to my family and I and take some accountability to help remedy the situation with a public apology. Although an apology can’t reverse what has happened, it would’ve helped clarify the distorted situation and help us all move forward – integrity intact.

No amount of money can buy that but hopefully the legal system, this time, will let me get that for my father.

As my father once said, “you can fall down, but never forget where you came from, because it always will remind you, of where you still have to go.”

And, I’m taking that advice. I’m closing this chapter in my life to begin a new one in 5 days.