On the hunt for attention, media outlets gamify the news

And now, for their next reader-engagement trick, publishers are taking a few lessons from your PlayStation.

The world of video games is coming to the news. While publishers are used to telling stories in text and, recently, in video, some are looking to add a dose of interactivity to their news in an effort to attract more readers and keep them around longer.

Last week, Al Jazeera launched “Pirate Fishing,” an online game that puts players in the role of a journalist as he investigates an illegal fishing trade. Players, who start as “junior researchers” get points by watching videos and filing clips in their notebooks, helping them earn “senior reporter” positions and ” specialist badges.” The game was based of an Al Jazeera video series originally published in 2012.

Al Jazeera reporter Juliana Ruhfus, who headed up the project, said that the game was meant to give players a more in-depth look at the process of investigating big stories, which is often difficult and rarely glamorous. And while Al Jazeera might have been able to tell that story via video or text, putting it in game form gives it the sort of engagement that other story forms couldn’t match.

“We felt that process of evidence gathering would be interesting to pass onto viewers and bring them deeper into the story,” she said.

It’s not just Al Jazeera, either. Gannett-owned Des Moines Register has also taken a stab at interactivity. Last week, it unveiled Harvest of Change, an interactive game that uses an immersive 360-degree format to tell a story about how Iowa farmers are dealing with demographic, economic and environmental changes. The team even made the project compatible with the Oculus Rift virtual reality headset, which Facebook recently acquired for $2 billion.

“It’s important for us and our journalists to not allow a medium to develop that we’re not going to at least explore,” said Anthony DeBarros, director of interactive applications at Gannett Digital. “It’s important to understand how we can be a part of an emerging medium.” DeBarros said that Gannett’s next goal was to figure out how to scale certain parts of Harvest of Change so that it can easily replicate the process for other projects. 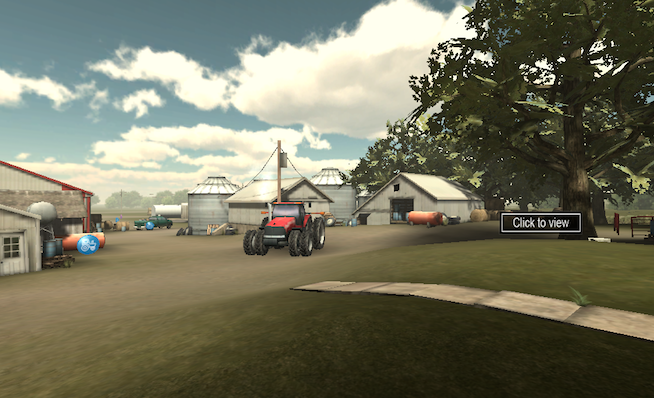 The push toward interactivity is a common one on the Web today. Publishers and brands alike are all trying to figure out how to grab and hold onto the attention of Web users, particularly attention span-starved millennials who are used to interacting with media, not just reading it or watching it. For print-turned-digital publishers, the situation is particularly dire, as people are spending just 6 percent of their media consumption time on print media, according to recent data from Kleiner Perkins analyst Mary Meeker.

That’s even more important as there’s more talk of replacing the pageview, ever susceptible to gaming through tricks like slideshows, pagination and clickbait, being replaced by some form of attention-based measurement. If such a transition comes to pass, keeping visitors around will be absolutely paramount.

BuzzFeed plans to take the push into games even further. Earlier this month, BuzzFeed announced plans to build its own dedicated game development team. BuzzFeed product vp Chris Johanesen told TechCrunch the plan for the team was create something closer to BuzzFeed’s existing quizzes rather than expensive blockbuster titles. “We wanted to create things that people would play with rather than just consume,” he said.

These projects don’t seem to be particularly scalable, however. Ruhfus said it took her eight-person team over a year to release “Pirate Fishing.” Likewise, the Harvest of Change credits over 20 people who had a hand in its production.

Still, Ruhfus said that news organizations should be constantly pushing boundaries with interactivity, especially if they want to attract younger audiences. “Readers today want to participate. They don’t just want to be talked at anymore,” she said.