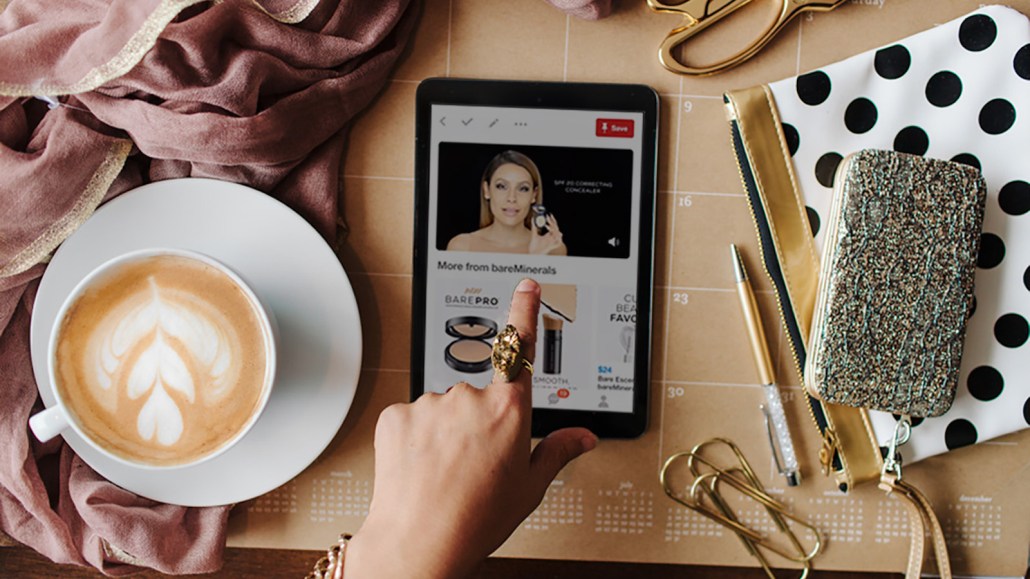 About two months ago, Pinterest rolled out video ads. While some marketers are intrigued, brands and agencies say that the ads only make sense for brands aligned with niche categories that are popular on Pinterest.

Chris Tuff, evp of partnerships at 22squared, has worked on Pinterest video ads for a national retail brand whose video ads have been live for about a week. Tuff declined to share statistics because he didn’t want to overgeneralize a small sample, but “the numbers we are seeing so far are really impressive,” he said. “And you get why. Because with Pinterest, there’s a high intention of finding something.” Tuff’s comment is supported by data from tech industry analyst Mary Meeker that shows 55 percent of Pinterest users use the platform for shopping, while only 12 percent of Facebook users and 3 percent of Snapchat users use those platforms to shop.

While Tuff is excited about advertising on Pinterest, he said that brands “have to be in the right vertical for Pinterest to make sense.” Omar Akhtar, an analyst at Altimeter Group, was blunter in assessing where Pinterest advertising stands among other platforms. He said that Pinterest — whose revenue last year was roughly $100 million according to The Wall Street Journal—is being left behind by the likes of Snapchat — which eMarketer projects to reach $1 billion in ad revenue next year.

“They [Pinterest] are not going to be a scale player,” Akhtar said. “The rates of growth just aren’t there. But if Pinterest can market itself as a way to reach a very specific demographic [that’s interested in fashion, food and home décor], there’s still a lot of potential there.”

One brand that fits in this demographic is cosmetics company L’Oréal, which has been running video ads on Pinterest since they debuted. Nadine Karp McHugh, L’Oréal svp of omni media, has been impressed by the ads’ performance and said the company plans to do “much more video with Pinterest in the future.” McHugh declined to share engagement or viewership metrics, but said that an internal study showed that Pinterest ads increased “purchase intent” by 8 percent and “brand familiarity” by 7 percent for L’Oreal-owned Garnier products. Many of the ads are instructional videos that demonstrate how to apply skincare products.

Mike Bidgoli, head of new ad products at Pinterest, said that dozens of brands have used the video ads since their launch. The brands are spread out across multiple industries — including retail, financial services, and entertainment — but entertainment brands in particular are getting a lot of engagement, he said. Pinterest declined to share statistics or rates for the ads, although Ad Age reported that CPMs range from $15 to $20.

Tuff expects his client will increase their Pinterest ad spend during the holiday season, and that more brands will run video ads during that time. Digital marketing consultant Jasmine Sandler is also buying into Pinterest video ads. Sandler is working with a client on video ads focused on baby showers that should debut on Pinterest later this month. Video ads will help Pinterest attract ad dollars “in certain industry segments” — such as home décor, fashion and food — which have “an inherent huge database of Pinterest fans,” she said. Below is an example of how video ads look on Pinterest.

Akhtar said there isn’t an indication that brands are increasingly adopting Pinterest’s video ads. Although that could change as a handful of agencies told Digiday that they are in early discussions with clients to possibly run video ads on Pinterest in 2017. However, a few other agencies said none of their clients had interest in experimenting with video on the platform.

The video ads are currently only available to advertisers in the U.K. and U.S. who work with a Pinterest account team. Bidgoli said the company does not have plans to open the ads up to all advertisers within the next year. But he acknowledged that “the evolution of these kinds of products is to be eventually self serve.”