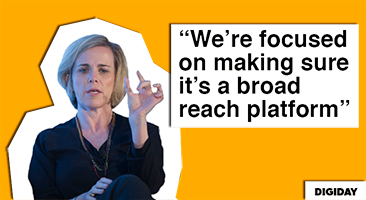 It’s no secret that Pinterest has a problem attracting male users. With a user base more than 70 percent female, according to comScore data from June, it remains the most gender imbalanced of the major platform players.

While over-indexing on women has been a selling point for Pinterest’s ad sales team, the company also recognizes it needs to become more bro-friendly if it’s to ever reach the scale it hopes to achieve. Some have said that the gender imbalance is self-perpetuating; a predominantly female user base results in mostly female-oriented pins, leaving men to feel that the experience does not speak to their interests.

“If you pull up Pinterest and go into any content section, you will see purses, dresses and women’s shoes because women are the user base,” DigitasLBi’s vp of social and content strategy, Jill Sherman, said in a previous interview. “When 70 percent of the users are female, then 70 percent of the content is going to be female-oriented.”

To that end, Pinterest is planning on making the sign-up process more welcoming for first-time male users, Pinterest’s head of partnerships, Joanne Bradford, said Thursday at the Digiday Platform Summit. Instead of being inundated with, say, women’s fashion items when they first sign on, male users would see items more stereotypically catered to their gender.

Watch Bradford address Pinterest’s “dude problem” and how Pinterest users are reacting to the platform’s ad rollout in the following video, filmed at the summit.