Omar coming yo: In quest for more engagement, ESPN bets on Omar Raja 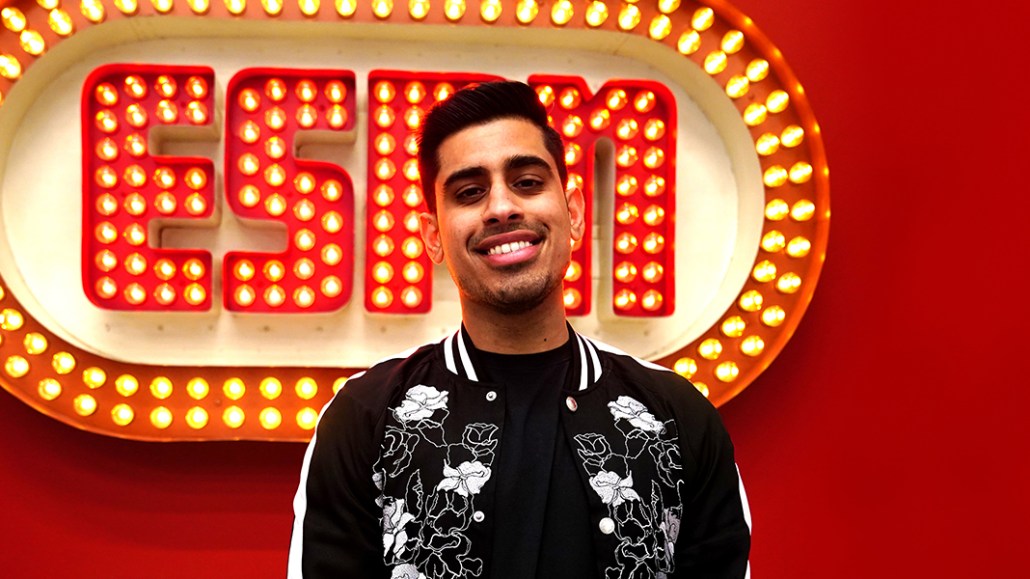 “Yo, I know Jordan was really good at basketball,” Raja says, sitting at the large university-like cafeteria inside ESPN’s Bristol, CT, headquarters in between bites of a slice of pizza. “My dad always tells me these really cool stories, but I don’t know much about him.”

This may seem like a throwaway line, but it gets at Raja’s underlying thesis, and why he’s on the verge of media stardom of the most modern kind. Raja, 25, has been able to harness social media to better explicate sports celebrity than any other person out there. He began with his Instagram handle House of Highlights, which compiled user-generated clips from sporting events — moments, memes and everything in between. It started when he was 19 as a silly account for young sports fans. Two years later it had amassed a cult following, and the attention of Bleacher Report. The Turner-owned sports-media company plucked Raja from Florida, brought him to New York, to do one thing and one thing only: post. Over a couple of years, House of Highlights grew to exceed 10 million followers and get the attention of athletes and celebrities, including Lebron James, Cristiano Ronaldo, Nikki Minaj and The Rock — all of whom dipped into the comments.

It got ESPN’s attention too. In 2019, ESPN began talking with Raja about potentially coming over to their side. It wasn’t quite Roger Clemons going from the Red Sox to the Yankees — Raja probably has no idea what this comparison is about — but it was close. The idea was for him to take over the SportsCenter account and form it into his own. When asked about how it came to be, all Raja says is “I met the right people,” and so he did. He inked a deal reportedly in the multimillions, and four people from his team from Bleacher Report ended up jumping ship and going to ESPN too.

Derrick Jones Jr. may know how to slam dunk a rubber ball, but Raja can wield the Instagram app on his iPhone with just as much finesse. Where many media accounts view social as a way to repurpose and distribute already-made content, Raja has people talking directly to him and sending him exclusive clips from games they attended. He has a voice made for the internet — one that his tens of millions of fans respond to via DMs and comments. “He carries with him something that is unique,” says Ryan Spoon, ESPN’s svp of social and digital content. “This ability to speak to an audience.” ESPN certainly has the eyeballs, but it brought on Raja specifically to drive engagement.

House of Highlights was proof that younger people on social networks craved relatable, less produced content of the athletes they love. It features iPhone footage taken by people in nosebleed seats, as well as more personal or silly scenes of the sports personalities not playing. It also focused predominantly on basketball and football, allowing the players to be seen not just as athletes with sweet moves, but celebrities participating in celebrity culture. House of Highlights was more about the culture of popular sports — and how younger people related to the ballers in the space — as much as it was about individual games and points. Raja’s move to ESPN is an attempt to transfer that vibe and voice to a 41-year-old TV show. It’s the sports network’s way of trying to signal to different types of sports fans that it wants their business too.

Now, only a few months in, Raja’s impact is already palpable. His first month was January 2020, and the SportsCenter Instagram account saw 160% engagement growth in that month compared to the previous year. Thirty-one ESPN digital posts that month broke the record for total engagement — of that much — 27 of them came specifically from the SportsCenter handle with Raja at the helm. (This was also the same month of Kobe Bryant’s passing, it should be noted, but many of these posts were non-Kobe related.) Followers went up by over half a million, and Raja is the first to point out that it was all organic, none paid. The playbook Raja is using for SportsCenter is generally the same; find the best, most relatable moments that speak as much to the sports’ cultures as they do the actual games. But this time the project is much vaster, given ESPN’s endless sports expanse and access to sports footage; Raja is no longer an NBA Instagrammer, he is trying to transform the network’s online persona into something younger and meme-able.

For ESPN, the decision to bring on Raja seems natural. It has been building out its digital programming for the last couple of years. The ESPN app now sees on average more than 21 million unique users per month, and its social accounts have a combined 248 million followers (which is about double Turner/Bleacher Report). The numbers are certainly trending in the right direction, but the ESPN app needs momentum — and someone who speaks to a specific audience — to keep it that way. Which is to say: Raja is ESPN’s ticket to the younger crowd looking less for sports commentary and more for memes and highlights. Even his job-change announcement illustrates this; when Raja posted his new gig, his Instagram became mobbed with comments and DMs. Most said congratulations, some asked for a job, others marveled at the job change. It took him three days to sift through the messages — all of which represent an untapped, mostly younger, fan base now eager to consume SportsCenter content.

While the decision to part ways with his first real job was certainly difficult, Raja also keenly understood the opportunity. What ESPN represented was access and firepower — something Bleacher Report simply didn’t have. “Here’s the thing,” says Raja, “we never had the access to the athletes.” Conversely, he goes on, “the top people you want to work with, ESPN is working with.” The athlete world is his oyster; “it was too good of an opportunity,” Raja concludes.

This SportsCenter opportunity also lets Raja expand into domains he’s never before touched. House of Highlights was predominantly a basketball-focused account; SportsCenter covers everything athlete related. He’s going to UFC fights, college football games, and other events House of Highlights likely wouldn’t touch. It’s an education for him, as well as an opportunity to increase social media fans who want to follow Raja’s unique online voice. The question remains: can his HoH success scale enough for an international TV network? Raja considers himself talent, not an Instagrammer — and ESPN agrees. The next twelve months will test how well this digital celebrity can translate for a legacy media business.

For now, Raja’s plans are to continue getting his feet wet and understanding how things work at the new mothership. He says he’s giving himself a year to understand how all the different leagues and schedules work before he sets ambitious goals. Right off the bat, however, things seem to be looking OK. Engagement is up, so too are followers; meanwhile, ESPN digital saw a 29% year-over-year increase in people ages 13 to 24.

In keeping with his charismatic online personality, Raja also wants to make his presence known internally too. “They gave me the nickname the Mayor at Bleacher Report,” he says because, “I probably know 80-90% of all the names.” With 4,000-plus people at his new job, he has a stretch goal. “I probably won’t know 90% of the ESPN names,” he says. “But I am trying.”