This time, it’s testing out a new feature for Web users where videos float while people continue to browse the social network. The Next Web, which first reported the news, said some users are seeing a square-within-square button in the video toolbars.

Once that button is selected, the video floats itself to the lower left corner but can be dragged anywhere on the screen. It does disappear if you navigate to another part of the website, so be careful what you click.

We saw the button, too. Allow us to helpfully point out the new button in the screenshot below: 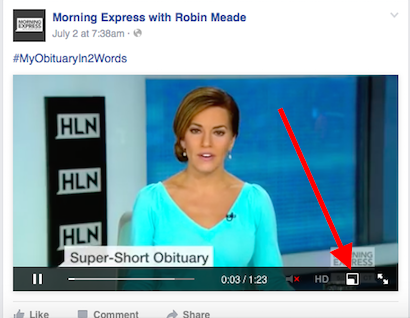 The idea is similar to what’s seen on YouTube and Twitter’s mobile apps, where videos keep playing. A Facebook spokesperson told Digiday that people have been asking for the ability to surf and watch videos  at the same time. They said it’s part of a “small test” before it’s possibly rolled out to all users.

Facebook is known for being inspired by their rivals and it’s been toying around with positioning itself as a competitor to YouTube. Last week, Facebook also announced it’s tracking what videos you watch to better serve you similar videos.

And, most importantly, if users are more inclined to watch videos at their own pace (and position), Facebook can sell more of those lucrative ads to advertisers.