Down but not out: 5 charts on the state of Gawker Media

Gawker Media is being sold at auction after being hobbled by its expensive legal battle against Hulk Hogan, effectively ending its life as an independent company. All things considered, things could be worse for Gawker, though. It has pulled ahead in traffic and turned an operating profit in the second quarter of this year. Here are five ways of looking at the company’s value that potential suitors will be looking at.

Revenue growth
Co-founder Nick Denton prides Gawker on achieving growth and profitability without taking outside capital (although it did take on debt to help finance its legal battle against Hogan). Its revenue has nearly doubled from 2012 to $48.7 million in 2015, and it turned a small profit in 2014. This year, second-quarter revenues were up 8 percent year-over-year, helped especially by commerce and programmatic, with its Amazon Prime Day revenues up 63 percent.

The lawsuit coverage brought some unflattering attention to Gawker’s journalistic practices, but Denton said as far as scaring away advertisers, the suit had “less impact than we had expected. Tech and telecoms clients are still drawn to [the Gawker tech site] Gizmodo and other tech properties. And the traffic surge has helped.” 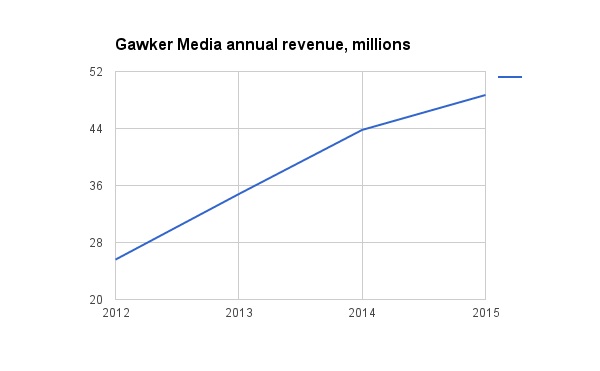 Tech and gaming are up
Traffic grew only slightly in the past year, by 3 percent, but there was a surge that increased traffic about 20 percent since April, Denton said. The gains came primarily from its tech-focused Gizmodo and gaming vertical Kotaku, which were up 34 and 51 percent year-over-year, respectively (and which have more potential to attract advertisers than Gawker’s edgy brand of journalism). Denton said the traffic gains were partly due to good stories and the vitality of the editorial operation as a whole.

But it’s still in the mushy middle
Gawker Media may be holding its own, but it’s still in the middle of the pack compared to other digital publishers. That may hold it back with advertisers that are looking for scale (and safer alternatives to Gawker’s risky brand). Its continued growth of traffic to its own properties is a sign of vitality compared to other digital publishers that are bigger but declining. In an age of distributed media, however, site traffic numbers don’t tell the whole story.

Popular with youth
Advertisers obsess over reaching millennials, so publishers like to brag about how well they serve this audience. Here, Gawker falls just north of 50 percent, with 52.4 percent of its audience falling into that age range. Complex Media, BuzzFeed and Mic have a higher concentration of young readers, though. And for sheer volume, there are plenty of other publishers that reach more 18- to 34-year-olds in absolute because they have bigger audiences to start with.

Video
When it comes to video, Advertiser Obsession No. 2, Gawker has trailed other publishers in investing in the medium. A look at the data in the chart from Tubular Labs below tells the story: Gawker barely registers compared to powerhouses like BuzzFeed and LadBible, with 37.5 million views in July, most of it coming from the flagship. Gawker may be prescient in believing video isn’t the future of everything, but it runs the risk of losing out on a lucrative revenue stream.