Nick Denton and Michael Wolff square off on privacy, journalism 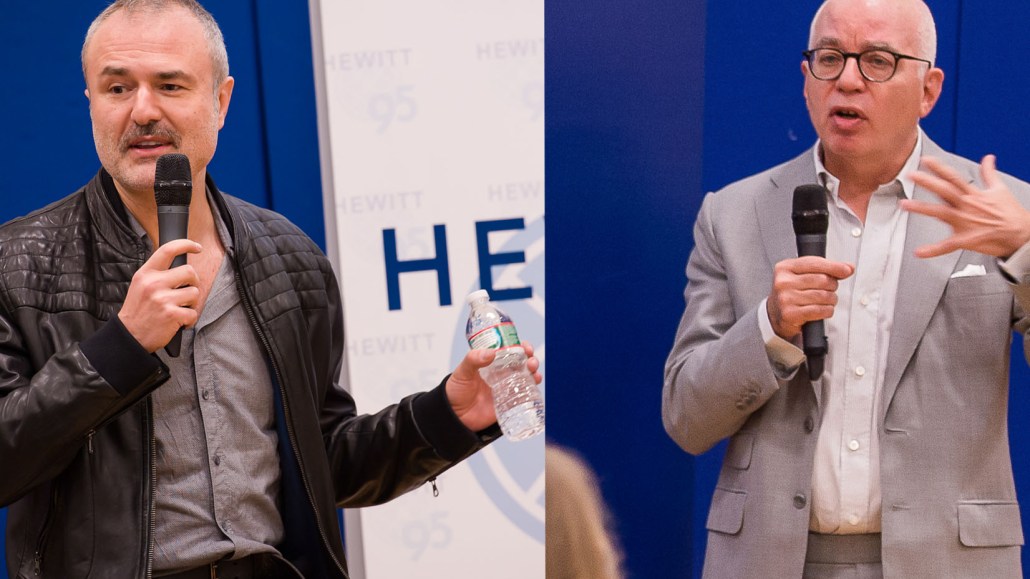 When Gawker founder Nick Denton and media critic-provocateur Michael Wolff get in a room together, things are bound to get interesting. The two talked privacy in the digital age to an audience of aspiring young journalists at The Hewitt School in New York Friday morning. Excerpts:

There’s no online privacy
Denton: “Every single email I write, I expect that it’s going to get shared publicly…I’m glad I’ve been gossiped about. It’s liberating. I have nothing to fear anymore. It makes you realize, everyone’s human.”

Own your own story
Denton: “People are talking about you anyway. So you might as well get out ahead of the story. Own your own narrative, before you can be outed.”

Vanity Fair has a “courtesy brush” for celebrities
Wolff: “I had a Vanity Fair piece. I knew it would be a problem. I asked Graydon Carter, ‘Are you sure you want to do this?’ He said, ‘Go for it.’ I came back and Graydon read it and he said, ‘Great. But let’s take the courtesy brush through it.’ This is never a black and white when it comes to celebrities and when it comes to media’s relationship with celebrities.”

How to skewer someone
Denton: “I always say, if you think they’re stupid, at least say they’re good looking. Just recognize they’re a mix of characteristics. Have fun with something, but just recognize a person’s true values.”

Celebrities aren’t what they used to be
Denton: “I do think celebrities have declined. There’s a kind of fragmentation of attention. It’s the democratization. It’s the flattening of everything.”

Sometimes you don’t publish
Wolff: There’s one anecdote [in ‘The Man Who Owns the News’] I did give up, which I feel helpless to tell you about. It involved Rupert Murdoch’s then 99-year-old mother, and what she said about Murdoch’s then-wife [Wendi]. It was just like, oh my God. I told the Murdoch people what she had said. It was like, ‘You really are not going to use that.’ It was like, this woman is almost 100 years old. And I didn’t use it.”

…Except when the story’s too good
Wolff: “I have tried not to do things, but sometimes, the story’s just too good. It will be disruptful and will hurt this person. But the story is too good. You start to think of it as literature or art, and you just publish.”