The New York Times has caught the newsletter fever. In the past year, it has launched a dozen of them — it now has a total of 33.

But with everyone seemingly launching a newsletter these days, the Times has to be mindful of the competition for inbox attention. That has meant taking a closer look at what readers are actually interested in.

Whereas its past newsletters tended to be extensions of its newspaper sections, its newer launches like Booming, NYT Living and Well encompass broader themes. Well, the Times’ newly retooled version of its older health newsletter, recently included a tech story about mosquito-repelling armbands, for example.

The Times also is going in the niche direction, too, with focused newsletters like one around columnist Nicholas Kristof.

“Historically, the newsletter has just been based on our sections,” said Dork Alahydoian, executive director of product at the Times. “We realized that’s not necessarily what people are interested in. So we’ve been exploring two ways of looking at it — going beyond sections to lifestyles and different themes. The other approach is going much narrower. It’s no longer a one-size-fits-all.”

The Times wouldn’t say how many subscribers it has but shared some numbers that suggest its approach is paying off. Subscriber volume has grown 14 percent in the past six months, with the number of newsletter subscribers ranging from tens of thousands to several million depending on the newsletter. Average gross open rate (which, unlike the uniques open rate, which is typically lower, counts duplicate opens) for weekly newsletters is 50 percent, with some of its newer ones including Kristof’s, the Times Magazine, Booming and Motherlode have gross open rates topping 70 percent. The gross open rate for media and publishing newsletters is 38.5 percent, according to email marketing company MailChimp. (The Times wouldn’t provide its unduplicated open rates.)

The Times sells ads into its newsletters but sees the main benefit as audience development. While publishers including the Times are trying to capitalize on the fact that people are increasingly coming to the news from social media, the Times is highly dependent on paying subscribers and, as such, is under pressure to nurture that part of its business. And its newsletters are a key way to do that. Times users are twice as likely to become paid subscribers if they signed up for a newsletter first.

E-newsletters have had a resurgence in popularity lately as an answer to the endless stream of news people get from their social media streams. But with more newsletters than ever for readers to choose from, the stakes are higher for publishers to deliver something of value. And as the Times’ newer newsletters mature, those sky-high open rates are likely to decline.

To keep its newsletters competitive, the Times has a 12-person dedicated newsletter team. They’ve been using Twitter and Facebook to gauge reader interest in newsletters. In the case of the Kristof letter, it got 50,000 signups after promoting it on social media and on site for six months.

Another way the Times has tried to make its newsletters distinctive and cut through the inbox clutter is by moving away from RSS feed-styled newsletters to human-written ones. Most of its newsletters are written by Times newsroom staffers like food editor Sam Sifton, who injects the Cooking newsletter with his own personality. He recently went off topic to recommend a Times book review by Sarah Lyall. “Sarah loves the book, and in her telling I imagine many of us will too,” he wrote. “It’s about words! To the local brick-and-mortar bookstore we go.”

The Times also is testing different designs and layouts like the highly visual Living newsletter, shown below, and looking for ways to templatize them. 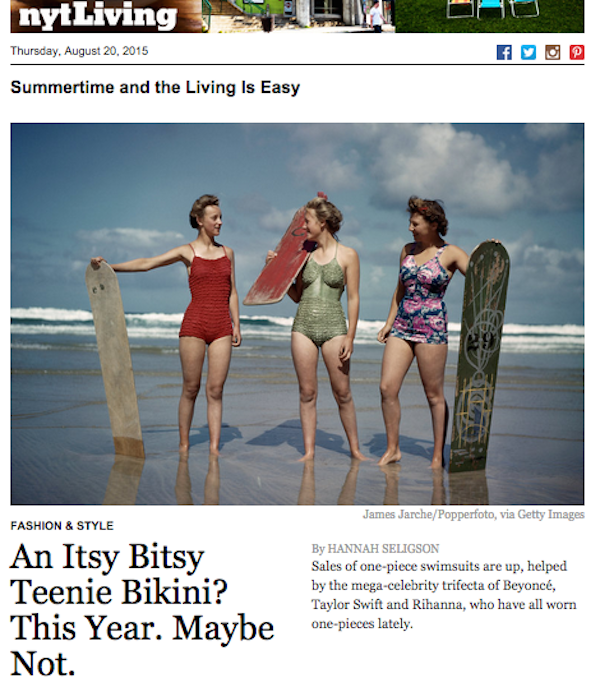 “Inbox clutter is something we’re sensitive to,” said Nicole Breskin, a digital product director at the Times. “Because it’s so saturated, it’s important we produce something of value.”