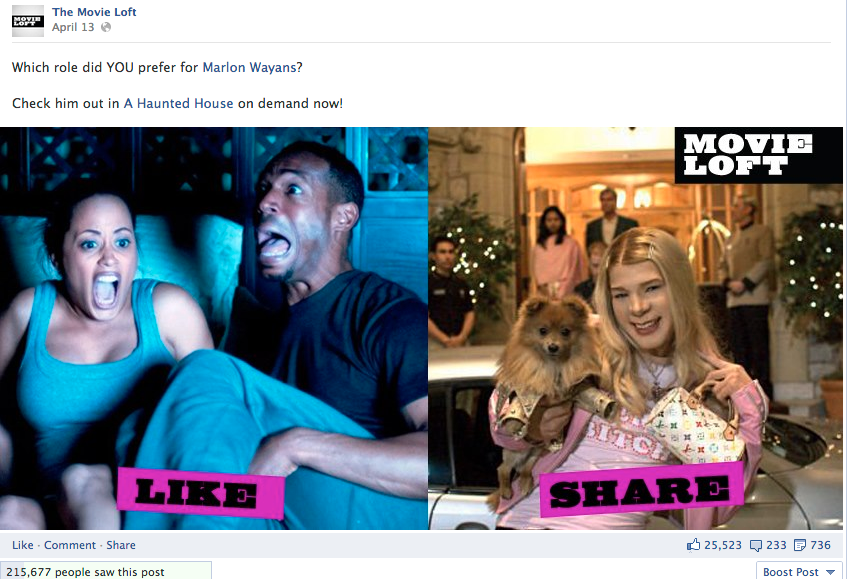 Websites and mobile apps are expensive, so some small publishers are taking a different route: Opting to build and monetize audiences exclusively on social media platforms.

The Movie Loft, for example, publishes home movie-related content exclusively on Facebook, Tumblr and Twitter and then charges major studios a fee to spread it further across those platforms using paid distribution. Its content includes movie-related images it creates, animated gifs, and straight-forward movie trailers. It’s a part-publisher-part-agency model that the company says is working – all without a homepage.

“We wondered what would happen if we bypassed the expensive part — the apps, the website and getting people to visit them — and just went straight to where the audience is,” said Movie Loft founder Brian Sullivan. “We just think of it as fishing where the fish are.”

The Movie Loft’s business model is not dissimilar to what BuzzFeed is doing with its own paid distribution program, through which it buys promoted posts on platforms such as Facebook to expose its sponsors’ content to a wider audience than it would otherwise attract organically.

The difference with The Movie Loft is its content lives exclusively on social networks, as opposed to its own property, and it isn’t created specifically for advertisers. If the publisher creates a piece of content a studio would like to see placed in front of a larger audience, the studio can pay The Movie Loft to distribute it on its behalf using paid placements. The studios pay what The Movie Loft calls a “service fee,” but the publisher backs out the numbers into impressions so it can compare its performance to others. It usually charges around 70 cents for 100 social impressions, Sullivan said.

Studios don’t pay the company to create the content itself. That said, much of the content The Movie Loft produces is neutral in nature. It posts content it knows will appeal to its specific audience, such as the Marlon Wayans image below, and prompts the audience to engage with it. It’s technically editorial content, but it’s content that studios are eager to have passed around, especially among pockets of passionate fans. Some studios even grant it access to certain assets and content.

The company began as an experiment, but the numbers are starting to add up. The Movie Loft only boasts around 250,000 followers across social media platforms, but it’s an audience that five of the eight major Hollywood studios are already paying to reach.

Sullivan acknowledged that the company walks a fine line between publisher and agency but said it thinks of audience first, despite the fact studios are paying the bills. Like any publisher, if it doesn’t have an audience, it doesn’t have a product to sell.

“First off, we’re a publisher,” said Sullivan. “We set out to build a community of avid movie fans. But if revenue opportunities from brands or studios emerge, we’re obviously open to discussion.”

As for the lack of a website, for the type of content The Movie Loft publishers — mainly videos and images — social media just makes sense.