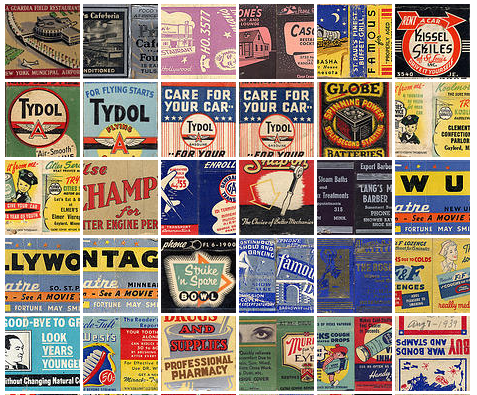 Stan Adler is a strategist, writer-at-large, author of cult favorite “The Zen of Selling” and writer of fiction. Follow him on Twitter @stanadler.

Recently, I bought a collection of vintage matchbooks at an estate sale. After arranging a few on my desktop, I realized that a marketing tactic, every bit as ubiquitous as what we now call mobile ad tech, was commonplace in the first half of the last century: rich content — 70 to 80 words per book — complete with illustrations, coupons, and call-to-action copy that could convert.

Matchbook marketing was happening every day, in every bar, restaurant, hotel, airport, bus station, women’s club, country club, dime store and every other kind of store. During World War II, General Douglas MacArthur, America’s finest military marketer, dropped matchbooks behind enemy lines in the Philippines with the message “I shall return.”

The peak of matchbook marketing was during the ’40s and ’50s — the pre-“close cover before striking” era. Billions of matchbooks were manufactured worldwide per year. In the U.S., there were over a million active collectors by the 1940s.

There were also non-destination matchbooks such as “Draw Me!” and “You Doodle?” with coupons to sign up for talent tests that qualified early creatives for commercial art courses at Art Instruction, Inc. Charles Schultz of Peanuts fame took the course and later signed on as an instructor.

Matchbooks featured movie stars, sports teams, pin-up art, most notably by Alberto Vargas, and advertised products as unique and different as body-building courses, breast cream developers, a sample box of 12 Jack Nuts for $1, and 115 genuine foreign stamps for a dime.

These paperboard 1½” x 2″ folders filled with 20 mini firebrands became mobile marketing platforms that traveled from hand to hand. There were offers and invitations with an angle for every occasion that fit neatly in the pockets, purses, and glove compartments of the world populace.

Japan pioneered matchbook production beginning in the early 1900s and had bragging rights to the first national branding of industrial products. The aesthetic of fastidious Japanese designers became a matter of controversy given the European influence — decidedly Victorian and Art Nouveau, later Art Deco and the Bauhaus.

The matchbook cover was part and parcel of the product — the product being fire, real fire — and with a hybrid mix of intimacy and intensity it had become a nearly foolproof marketing model that could advertise everything no matter how else it was advertised. If it wasn’t on a matchbook, it wasn’t worth your attention. And if you didn’t have a light, you didn’t have much of a life.

Then came the dramatic demise of this little marketing marvel. Why? A decrease in smoking? No, there was no decrease … just progress. With matchless irony, the disposable lighter came along in the mid-’70s and wiped out 90 percent of the market by providing more lights per minute per pack than a matchbook could ever match. One disposable device disposed of another. And the creativity disappeared, but the smoke never cleared.