How Meredith’s magazines are shifting to video

At many publishers, no matter the question, the answer is video.

Meredith, parent of Martha Stewart Living, Better Homes and Gardens and 16 other food, parenting and lifestyle titles, is no different in emphasizing the shift to video, which is coveted by publishers for its high ad rates and for the prominence that platforms like Facebook give it in feeds. Meredith produces 500 original videos a month, which get 80 million unique views, according to the company. That’s double the number of original videos it produced in 2015, at just over 3,000.

“We are set up to crank out a lot of video a month,” said Melinda Lee, svp/gm of video at Meredith.

But the high cost of video has publishers looking for ways to be more efficient. Meredith has chosen to emphasize a centralized approach. The company has a 30-person centralized video unit out of a total staff of 3,754. It’s made up of producers, shooters, editors and executive producers. Within that group, some executive producers are assigned to create video in certain verticals such as fitness and exercise that can live across multiple titles. There also are executive producers who focus on key titles, such as Martha Stewart Living, Parents and Better Homes and Gardens.

The goal of this approach is simple: to generate as much video as possible while producing video that’s aligned with each magazine brand, said Lee. The video unit works closely with each magazine’s editorial departments and takes direction from the editorial calendar to figure out what can be applied to video. The video unit will pitch an idea, but the magazine’s editorial team will ultimately decide if it fits within the brand.

Data plays a big role in how the centralized team operates, Lee said. It knows food, and in particular recipe videos, especially around holiday periods. The recipe videos are the most popular and are planned up to a year in advance. Magic Chocolate Shell Ice Cream Bars got 1.8 million views, and its first Facebook Live video with Martha Stewart, “Martha is baking, rolling, cutting and decorating her favorite Christmas cookies,” filmed in her own kitchen, received more than a million views overall. Another example is Thanksgiving. Lee said a pumpkin pie or mashed potato recipe will be a must and will be shot by the centralized team, in a few different ways, using different logos, to apply to different brands. But certain food videos won’t work across the board she said. “We’re not going to put a home comfort recipe on Eating Well because it won’t work, and that’s where we’d work with brand experts and digital directors to see what articles are doing well and we’d create a video off that.” 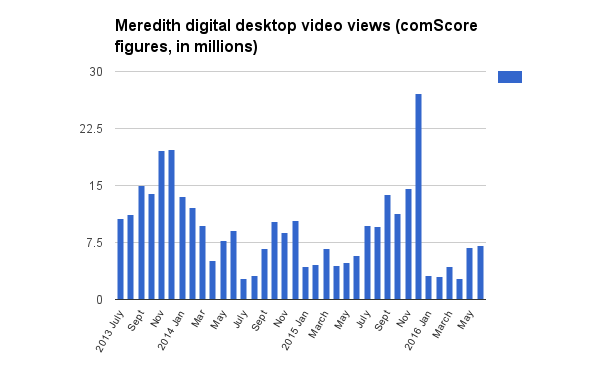 When it comes to Facebook Live, Meredith doesn’t have a dedicated team, and all its producers must be able to create live video. It’s experimenting across most of its brands including Martha Stewart Weddings, Better Homes and Gardens, and Shape, and is producing five to 10 live videos a week, lasting anywhere from under 10 minutes to over an hour. In all, Meredith has produced 76 live videos in the past eight months. The company is also testing different filming techniques, from mobile phone cameras to broadcast-quality cameras in its studios in New York and Des Moines, with a third on the way in Seattle.

One example was Shape’s live video with fitness trainer, Holly Rilinger, who hosted a group fitness routine in downtown Manhattan on June 6. Meredith wouldn’t provide average live viewer figures for any of its videos, but that specific one received 125,666 views and mirrors what other publishers, such as Condé Nast and Hearst, are doing with fitness videos on the platform. Another title, Better Homes and Gardens, shot live in a studio last week using three cameras for a “Christmas in July” DIY feature. It got 33,239 views.

Finding the balance between creating cheap and easy video content, compared with in-studio using expensive camera gear, is what Meredith needs to explore, said media analyst, Dan Cryan, senior director of broadband media at IHS Markit. He referred to its video viewer numbers as “genuinely quite nice,” and better than cable news, but noted Martha Stewart is expensive property for ad buyers. “The question for Meredith is finding the right content mix, which balances what the audience wants from the publication, combined with seeing a meaningful return of investment. There is a lot of work to be done there,” he said in reference to all publishers entering Facebook Live.

In terms of generating revenue off of the platform, the company looks to Martha Stewart’s live videos and integrates products into its content, such as Arm & Hammer in a cleaning video and Kerrygold butter in a baking video.

Lee said Meredith is also trying out virtual reality as well as 360 video.

“One dream, silver-bullet format for live just doesn’t exist yet,” she said. “We’re in the space of what story do we want to tell and how does our audience want it?”