‘The money is real; that’s the problem’: Publishers turn a blind eye to content-recommendation ads

Those article recommendation boxes at the bottom of publishers’ article pages have a clickbait problem, which is why prestige publishers Slate and The New Yorker recently removed the modules from their sites and others are reconsidering them. In testing, “it makes people angry,” About.com CEO Neil Vogel said of the content in the modules.

But how does these links get there in the first place? The publishers like to point their fingers at the content recommendation providers, but it’s the publishers that control the quality of the links that appear on their site — and too often they choose to turn a blind eye to make more money. Outbrain estimated that it supplies as much as 30 percent of some publishers’ revenue, reported the Times. That means the revenue side of the house at publishers is hell-bent on maximizing clicks, no matter the quality.

Most of the widgets placed on publisher pages, variously labeled “promoted stories” and “from the web,” come from tech companies Outbrain and Taboola and increasingly, new ones including ZergNet, Revcontent and Content.ad. Publishers earn money from the modules by renting the space to marketers and other publishers, who use the slots to drive traffic to their own sites. The host publisher gets paid when a reader clicks on one of these external links. The content-rec companies also offer big guarantees to blue-chip publishers, hoping their prestige will help them attract other publishers.

“The money is real, and that’s the problem,” one premium digital publishing exec said, who spoke anonymously so as not to jeopardize the publisher’s highly lucrative deal with one of the content recommendation companies.

The content recommendation companies give publishers the ability to block by criteria like keywords, domains and categories. But there’s a financial incentive for publishers to turn the dial to let in more titillating content, because it tends to get more clicks. The vendor makes money and the publisher makes money. “If you block a ton of stuff, you’re not going to make as much money,” the veteran publishing exec said. “You’re cutting back on the potential.” And so publishers often end up with stuff like this:

That’s Newsweek, a site with a long tradition of serious journalism. Meanwhile, an entertainment site like People could get away with more salacious links, but the ones in its module mostly still feel like they belong on People. Here’s how People’s module, powered by Outbrain, looks: 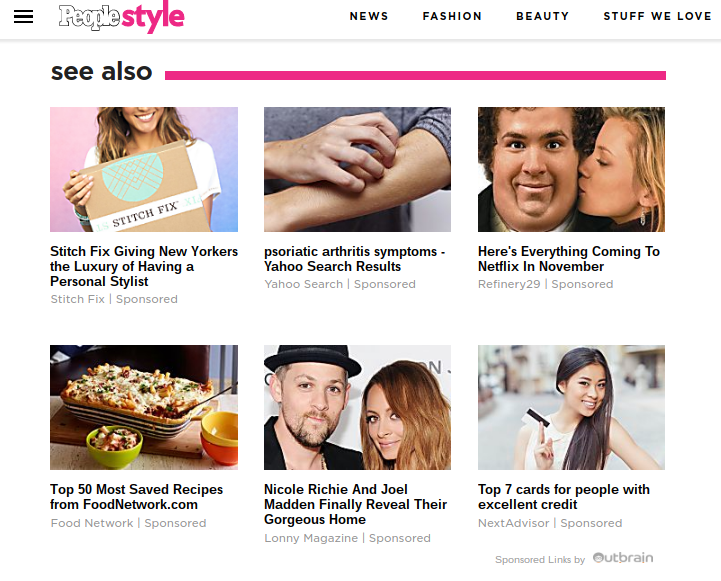 While the widgets bring in good money, they’re also another thing for busy publisher staffs to monitor, usually the editorial side, along with other ads that are served programmatically. Publishers usually start out making a concerted effort to police them, but over time, a blindness sets in with editors who are already overwhelmed with all the other tasks they have to do.

The widget companies have filters and checks to maintain quality control over what flows into their systems. But some of the ads come from companies that alter the ads after they’re published, turning them into misleading ads for products. Another big problem is when misleading images make it through the filters. Image detection technology is far from perfect, which is why 90 percent of Outbrain’s content that’s rejected by publishers is because of a bad image, said Matt Crenshaw, vp of product marketing at Outbrain. “You can’t put considered eyeballs on 200 images a month,” Crenshaw said.

It’s hard to see publishers weaning them off such a steady source of income at a time when other forms of ad revenue are hard to come by and Facebook traffic vacillates widely. Still, the business is only 10 years old. Todd Sawicki, CEO of Zemanta, a programmatic platform for branded content, sees it evolving as consumer-products marketers become more accepting of it as a paid distribution mechanism.

That will crowd out the spammier content and be more lucrative in the long run, since the brands pay up to 30 cents a click, 10 times what the click-bait publishers do, he said. “Today’s publishers are the remnant buyers, just like the punch monkeys of five, 10 years ago,” he said. “Big brands are starting to move into the space. As [the spammy publishers’] air supply goes away, they will, too. This is normal survival of the fittest.”