Len Downie: ‘WashPo Is Not a Trophy for Bezos’ 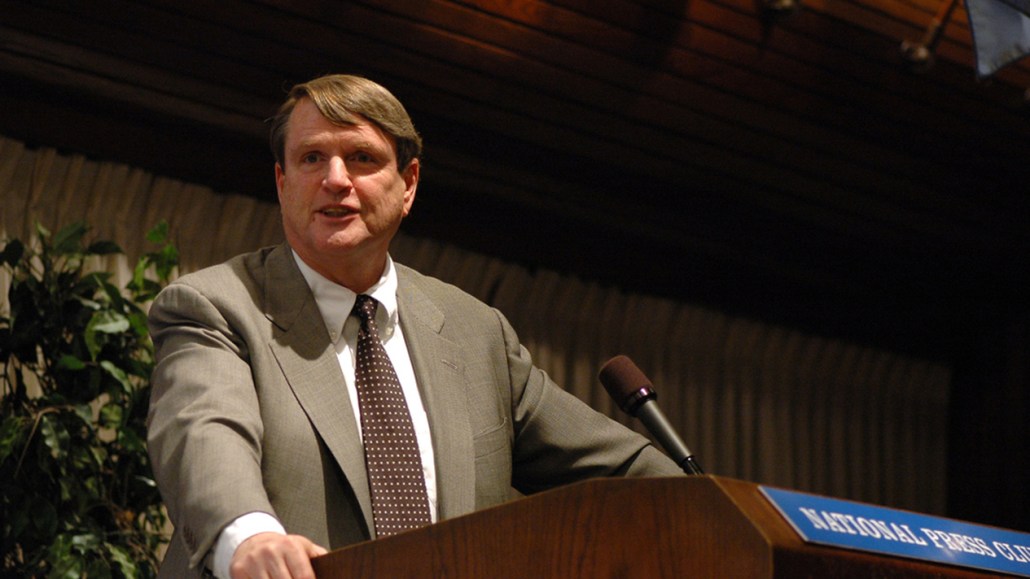 Under Len Downie’s 17-year run as the Washington Post’s executive editor, the paper won 25 Pulitzer Prizes, including three Gold Medals for Public Service. Downie, whose 44 years at the paper included overseeing much of the paper’s storied Watergate coverage, is currently vp at large at the Washington Post Company.

He recently spoke with Digiday with little sentimentality about the sale of the Post to Amazon.com founder and CEO Jeff Bezos, what the biggest challenge is for print and whether journalists should know how advertising works. Excerpts:

What does this sale mean for the Post?
It’s going from a public corporation to a private family company. Rather than have to worry about quarterly results in a large corporation and whether or not it was pulling its weight financially, it is now the sole holding of a very wealthy man who can decide for himself what financial results he’s seeking. The second thing it means is that there will be a much stronger digital awareness, digital experimentation and digital vision in what’s possible within a newspaper.

What do you see as the biggest near-term challenge?
Innovation. And it has been for some time now. We’re just starting some new video products. We’re experimenting with video in a way we’ve never done before and relatively few other newspaper organizations have done. There’s all kinds of ancillary areas for innovation on the business side. Amazon had done a lot of that kind of innovating in the past under Jeff Bezos.

While the discussion of wealthy individuals buying newspapers as a vanity play is nothing new, what are your thoughts as it pertains to Bezos?
He seems, from everything he’s done so far in his life, that he’s not a vanity kind of guy. He’s a doer. I don’t see it as, say Annenberg buying the Philadelphia newspaper, which was clearly a vanity play. Or in the case of Murdoch, where it appears to me to always have a political motivation. I don’t see any sign of trophy-ness.

The Washington Post is still fundamentally a local paper. Should the Post reposition as more of a national paper and go after more national brand dollars?
This is not a new conundrum for the Washington Post. We are unique in the entire world for being a local, national and international news organization. The income is still predominantly local advertising through local print advertising. But the most growing part of our income – but still not anywhere near as big as local advertising – is national advertising on the digital national advertising, as well as in print. Why throw away the local economic base the paper has? He has choices to make, but I don’t automatically assume he’ll make this a national news organization only.

Should journalists know about the business side of a media company, how advertising works at their outlet?
Yes. Your reporters don’t necessarily need to know that, but certainly any person running the newsroom needs to understand that. Any new product we want to launch, any innovation in our news coverage, has to be done in concert with the advertising department in a way that it’s totally understood the advertising department doesn’t in any way influence the newsroom. But they have to work together in order to understand how to understand a business, how to enlarge a business, how to create an innovation.

Are you seeing a new or emerging media business model that could work for everyone?
There’s no single business model anymore. You see these weird arguments going on: Should you have a paywall, or should you not have a paywall? Is Internet advertising important? All these either/or and black-and-white arguments are really silly because they derive from the old days when all of us were subsidized by advertising. That’s no longer the case. Traditional advertising is a smaller and smaller proportion of revenue for all news organizations. Therefore, the models that are going to work will differ by individual circumstances.

And Bezos has flexibility to experiment?
Yes. He has the flexibility and the imagination to figure out what will be the right things for this particular news organization.

Do you think the $250 million price tag was fair? Should it have been more?
If you ask anybody on the business side of the paper about my business acumen, they will tell you Downie is really good at spending money and hasn’t the slightest idea how to make it.