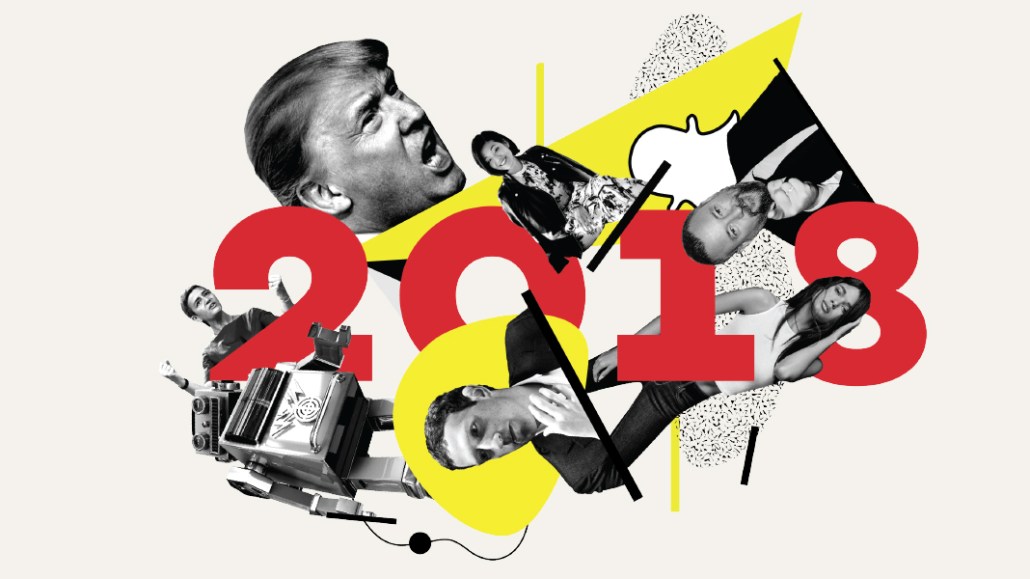 We are wrapping up the year by wrapping up the eighth issue of Digiday magazine, which is part of our premium membership program Digiday+. In this issue, we take a look at the big ideas that we believe will shape media and marketing in the year ahead.

If there was one dominant theme of 2017, it was the questioning of many of the rosy premises of the shift to digital media. Lawmakers started to hold the tech giants accountable for allowing extremists and foreign entities to use their platforms for ill. Publishers began to stand up to the platforms’ dominance over the distribution and monetization of content, pulling back from putting their editorial content on those platforms. Marketers called for a draining of the swamp that is digital advertising, with all its fraud, bots and measurement problems. And in media, marketing and tech along with countless other industries, tolerance for sexual harassment is coming to an overdue end.

2018 will only see an acceleration of these questions, as media retrenches from fantasies of easy money from supercharged audiences on Facebook and marketers start to crack down on giving their marketing over to algorithms. As it’s become abundantly clear in recent months, it’s that the scale- and advertising-based model that’s dominated digital media is, in large part, unsustainable.

Advertising is a great business model, but publishers have let themselves grow too dependent on it, and the rise of Google, Facebook and the other tech giants hasn’t left enough to support the rest of the publishing ecosystem, even as publishers scrambled to shift to lucrative digital video. The year ahead will force publishers to supplement advertising with other revenue streams, while focusing their message to advertisers to make the case for themselves in an ever-tightening race for ad dollars.

We’re examining these themes in a number of ways in the issue. U.K. reporter Seb Joseph argues that this is the year that marketers will really start to care about the problems of digital advertising. Senior reporter Sahil Patel calls the fail of the pivot to video, which has turned out to be really hard to make money from. Co-executive editor Shareen Pathak reality-checks Amazon’s retail and advertising ambitions. Top executives at Facebook, Procter & Gamble and The New York Times share their views about the future of video, advertising and subscriptions in their own words.

We’re also looking forward to our third year of Digiday+. It’s our recognition that, like other publishers, a successful media company needs to get revenue from a variety of places. In 2017, we introduced exclusive research, more in-person events and Digiday IP, a way to help you be smarter by organizing the news and information on Digiday. Look for us to hone and build on these in the year ahead. As always, let us know what you like, dislike and want more of. Your feedback helps us make the program even more worth your while.