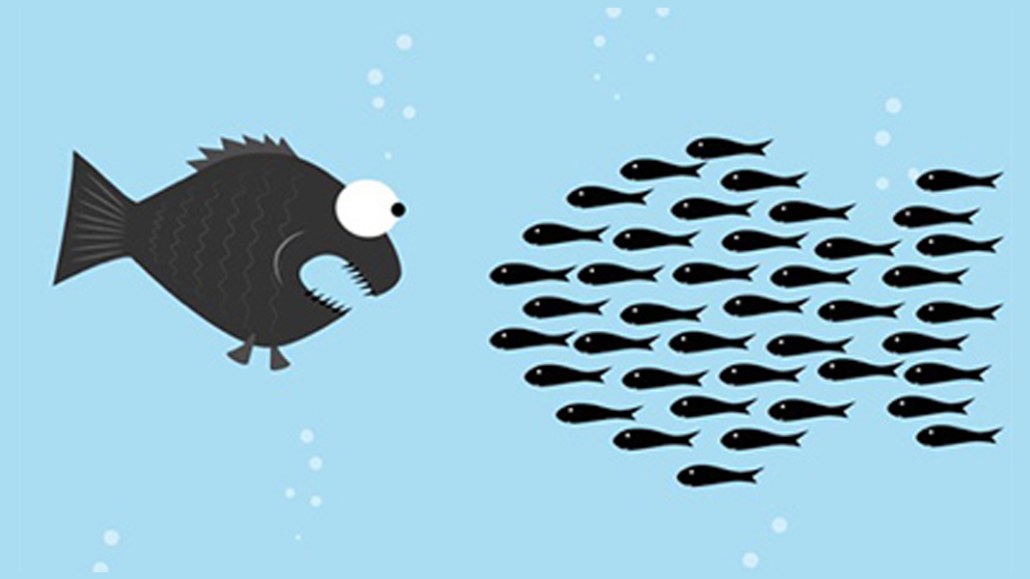 When Capital One hired independent agency The7stars earlier this month, the advertiser’s brand director Katy Lomax hailed the agency’s “transparent approach” to media buying. Less than a week later, food-delivery company Deliveroo echoed that sentiment, calling the agency “compelling.” Both advertisers’ decisions to opt for The7stars rather than big holding groups illustrate that a network agency’s loss is now an independent shop’s gain.

The last 12 months have seen a steady flow of media budgets into independent agencies on both sides of the Atlantic. Of the £11 billion ($14.7 billion) of media billings tracked by research firm Comvergence across 21 markets including the U.S., Germany and India over the first nine months of the year, around £2.1 billion ($2.8 billion) was assigned to independent media agencies. One-third (16) of the 42 accounts analyzed in the first six months moved to an independent shop, including Honda’s £449 million ($600 million) to Horizon Media and Sprint’s £516 million ($690 million) to RPA. Comvergence estimated independent agencies mainly concentrated in the U.S. would win a further £224 million to £300 million ($300 million to $400 million) in the last three months of the year.

That benefit is being felt in the U.K., where the likes of The7stars that have offered independent alternatives for over 10 years now have the scale to take on large clients from the big agency groups. While full disclosure, audit rights and media at net costs may provide reassurances, the web of self-interest can run incredibly deep, meaning advertisers receive no guarantee of neutrality when it comes to strategic recommendations. “Companies like The7stars are winning larger accounts, thanks to having always had open, transparent models and therefore not being part of the problem,” Wright said.

Transparency has been pushed to the top of the agenda in 2017, and there is no doubt the talk is turning into action, said Jenny Biggam, CEO and co-founder of The7stars. She added that independent agencies are profiting from enlightened advertisers increasingly looking beyond the larger networks. “Billings in the independent sector were already up 10 percent in the year before some further big wins more recently, which indicates the trend is set to continue into 2018,” she said.

But independent agencies will continue to benefit only if marketers are prepared to pay for transparency. For all the threats and demands made by some of the world’s biggest advertisers, few have openly said they’re willing to pay more for quality. It might seem counterproductive to put a premium on honesty. Mark Butterfield, marketing consultant and former consulting firm executive, has debated whether that means there’s a separate price for dishonesty. Yet rightly or wrongly, it seems like transparency comes at a premium. If agencies, many of which are struggling to offset shrinking budgets, are to be incentivized to stop making money from undisclosed fees, then advertisers must pay them more to close those options down. You only get what you pay for, said Darren Woolley, founder and global CEO at marketing consultant TrinityP3. In some cases, this is a flat commission or markup, he added, while in others it’s a flat fee or retainer. Both of these remuneration models are supported by some type of performance bonus, added Woolley.

One advertiser wise to the transparent approach is Barclays. Earlier this year, the bank reviewed its £60 million ($80 million) global media account. Unlike other media reviews, Barclays told the participating agencies it would pay more to see how its money is being used to buy media, according to two sources. OMD eventually won the account from GroupM. OMD will have to be extremely careful with what it does with the bank’s money. Both Barclays and OMD declined to comment.

If more brands follow in Barclays footsteps, then the independent shops could start to look more attractive to the big-spending brands. Momentum, both in pitch rooms and in the press, seems to be with the independent shops going into the new year as their larger counterparts struggle to adapt business models under attack on all fronts. Both Capital One and Deliveroo, two of The7stars’ biggest wins since it launched in 2005, came in the wake of the agency’s much publicized support of a strict contract template from advertiser trade body ISBA in the U.K., which is designed to ensure greater transparency in a more fragmented ad market. While the big network agencies made no secret of their frustration toward what they deemed another squeeze on their margins, The7stars did the opposite, subsequently benefiting from the PR even if the restrictive contract hurt its bottom line in the short term.

Fundamentally, it’s about making investments that are right for the client and building trust, said Biggam. In transparent media-buying situations, agencies may be paid more for their services and expertise, but “ultimately, the net cost of media is lower to the advertiser because media owners aren’t paying the agency a big slice of the cost of space,” she added.

Winning larger media accounts won’t be easy for independent agencies. The recent closure of the U.K. office for Blackwood Seven, a Danish startup that tried to replace media agencies with an artificial intelligence platform that could plan and buy media, is a testament to that. Any agency coming into the market fresh like Blackwood Seven will find it “difficult” due to lack of infrastructure, said Dan Pimm, co-founder and director at December 19, and the lack of its own client case studies, which offer potential clients piece of mind about working with an agency. The difficulty for independents is building from bottom up rapidly, Pimm added.

Although independent agencies are on the rise, established businesses will take advantage of the current climate, while newer shops will have to work hard and be patient for success.