Tech publisher IDG can’t ignore ad blocking. On average, a quarter of its visitors block ads on its tech publications, which include CIO, Computerworld, Macworld and PCWorld. That’s roughly in line with the industry. But the ad blocking percentage can go as high as 45 percent on its sites in Germany, where it’s been estimated that 30 to 50 percent of internet users employ an ad blocker.

But the company’s had success fighting back against ad blockers thanks to a tough-love approach. In January, when the company blocked people from accessing content on its U.S. sites unless they turned off their ad blockers, 38 percent of visitors whitelisted its consumer sites (and 37 percent on B2B sites).

“We’re trying lot of things to say to our readers, ‘We want you to get this content to you so you can do your jobs better’,” IDG CEO Mike Friedenberg said. “If we ask them over time, we’ll educate them.”

IDG has thought about charging for site access, but it sees limited opportunity, particularly in the U.S. It has seen success with asking people to register, though. A few years ago, it launched its Insider program on its B2B sites, which effectively charges the price of an email for premium content. Five years after launching the program, IDG has collected 500,000 emails — a database it can charge advertisers to use if they want to target prospective customers. “That’s working extremely well — that’s the equivalent of us getting them to swipe a credit card,” Friedenberg said of Insider. 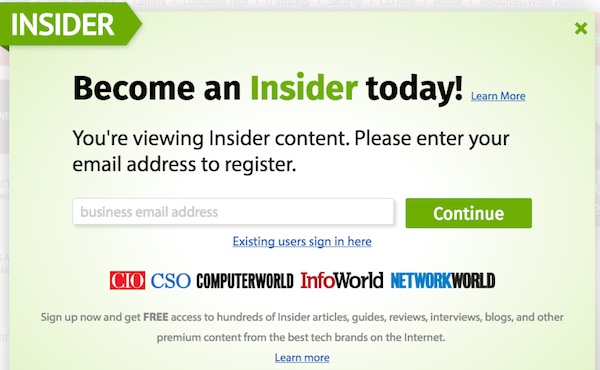 IDG hasn’t tested ad reinsertion or an ad-light experience, as other publishers including Forbes have. Ad reinsertion — where publishers bypass blocking technology so they can serve ads to people who block ads — is controversial; some ad buyers don’t want to serve ads to people who have explicitly opted out of seeing ads. Instead, IDG has focused on making sure its sites provide a good experience to users, with minimal, fast-loading ads.

“We don’t think we should get into this arms race,” Friedenberg said. “Someone who downloads an ad blocker may not be thinking about the quality of the site. They’re finding the user experience to be frustrating. If they have an ad blocker and they see ads, I think that would upset them.”

While not optimistic about getting people to pay for content now, Friedenberg compares the current ad blocking situation to the early days of Napster, the illegal file-sharing service that thrived until Apple came along and gave people a way to pay $1 a song. He believes that as consumers keep getting the message from trade associations and publishers that news depends on advertising, over time they may become more willing to pay in some form.

“When Napster launched, it completely disrupted the industry,” he said. “You translate that to our industry, where you have a large majority of media brands putting out quality content. But then you also have sites that look like Times Square and you can understand why the user community is pushing back by downloading ad blockers.”