Sports publishers get smart about mobile 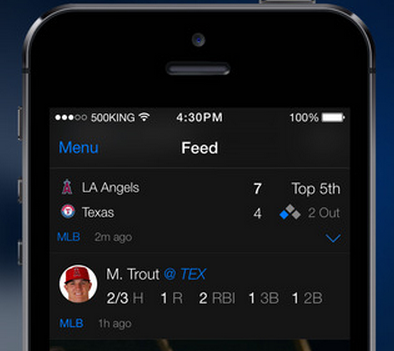 In the race for being the go-to source for sports content, publishers are thinking a bit more critically about how they present their sports content to mobile readers.

Publishers like USA Today’s FTW, theScore and Sports Illustrated are all tweaking their sports coverage with an eye for what works best on mobile devices. The approach makes sense. As the share of traffic coming from mobile devices at most sites creeps past 50 percent, publishers realize that they have to respond to a new form factor and set of consumption habits.

The challenge for sports publishers, though, is that people go to sports sites for a variety of reasons. Sometimes it’s to check the score of a particular game; other times it’s a more aimless search for the latest updates, either in text or video. The complexity here is further complicated by the fundamental habits of mobile readers, who tend to be on-the-go and hence don’t have much time or tolerance for being forced to click around.

“It isn’t just good enough to take content from other platforms and reproduce it for mobile,” said Benjie Levy, president and COO of the theScore, which gets more than 95 percent of its traffic from mobile. “You really have to reimagine this experience from the ground up and think of how would you create content in the first instance.”

For theScore, the result of this thinking is MyScore, a Facebook Newsfeed-like feature it introduced in May that lets readers follow scores, teams and even the movements of individual players from a single feed. The approach is working. TheScore said it had 5.5 million average monthly active users at the end of the third quarter, a 33 percent increase over the same time last year.

Sports Illustrated, in contrast, is working in the opposite direction. While theScore is a mobile-first media brand, Sports Illustrated is a legacy media organization trying to adapt its brand to mobile, where it’s already getting half of its traffic.

In response, Time Inc. recently redesigned the SI.com mobile site with a strong emphasis on what the habits and preferences of mobile users. One the most obvious reflections of this approach is the site’s box scores, which appear at the very top of the mobile site, above even its article stream. Jim DeLorenzo, SI digital vp, said that decision was a result the basic observation that, when readers readers check SI.com on mobile, chances are they just want to see how their teams are doing. It’s a small feature, but in today’s rabid land grab for reader attention, small features add up.

“You really have to slim things down,” DeLorenzo said. “More features does not necessarily equal a better product.”