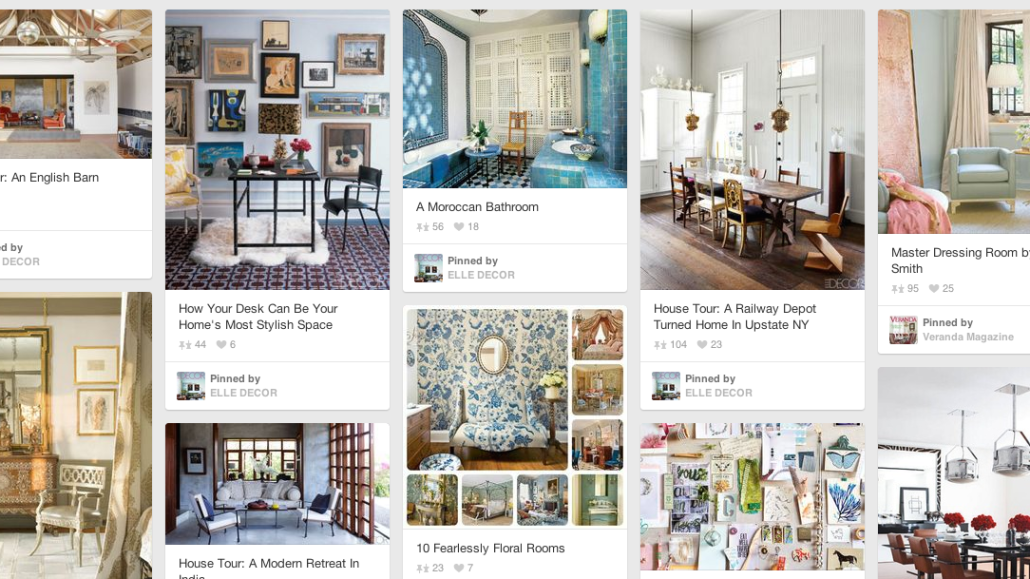 Publishing is increasingly becoming a game of which publisher can best market its stories on social platforms, typically Facebook and Twitter. But Hearst has experienced an unexpected but much welcomed traffic boost over the past two years from Pinterest.

Hearst’s sites — particularly female-focused ones like Elle Decor, Good Housekeeping and Harper’s Bazaar — see anywhere from 5 to 10 percent of their traffic come from Pinterest, according to Brian Madden, Hearst’s executive director of audience and partnerships. News and entertainment sites saw 2 percent of their referral traffic come from Pinterest, according to a Quantcast study conducted from January 2013 to January 2014. And since referral traffic typically constitutes approximately half of a site’s traffic mix, the difference between Hearst and other sites in terms of Pinterest referrals is wide. To be sure, Pinterest is not yet a top traffic driver, but it is proving effective.

“The exciting thing is that the evergreen content is going to continue doing well,” Madden said. Some stories see a steady stream of Pinterest referrals for up to six months, he said.

Pinterest is in the midst of a morphing from an online scrapping site for women to its vision of being a visual discovery platform along the lines of Google.  Its PinIt buttons are in use far and wide across the Web, and the company recently said users have pinned 30 billion items. Clicking on a Pinterest image takes a user to the originating website. While retailers have seen great use in this, Pinterest is actively courting publishers.

For example, Cosmopolitan story “18 Signs You’re With the Man You Should Marry,” which saw a disproportionately high amount of Pinterest referral traffic. It was pinned 2,300 times, nearly four times greater than its number of tweets (800). That number was dwarfed by the astronomical number of Facebook shares (more than 424,000) the listicle received. Cosmopolitan saw its number of Pinterest referrals increase 650 percent year to year, Madden said, and Esquire’s jumped 200 percent, apparently popular with the men on Pinterest crowd.

The referrals were initially not the product of a well-coordinated social media strategy. In fact, Hearst hadn’t even made Pinterest pages for all of its brands when it first noticed that Pinterest might be a good traffic generator. The process was entirely organic in the beginning: Without provocation from Hearst, readers had started pinning images of Hearst stories to their own Pinterest boards, which in turn caused other Pinterest users to click through to Hearst’s websites. All of those pages are updated almost daily.

Madden said that Pinterest is a natural fit for Hearst content because, like many Hearst titles, its a place to for compelling images about beauty, food, health, home decor and style. And unlike with Facebook and Twitter, platforms good for short viral bursts, Pinterest has proven a great way at breathing life into Hearst’s backlog of stories.

But not all Hearst titles feature the kinds of glossy food and home decor photos that do so well on Pinterest.

“It’s more of the service, helpful kind of content,” Madden said. “Celebrity and breaking news, people are getting that elsewhere.