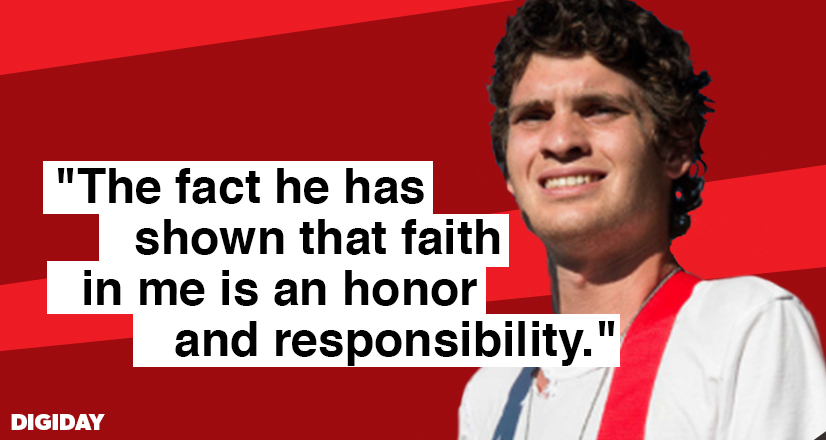 In what has to be one of the fastest ascents in publishing, Wenner Media on Tuesday announced the promotion of 23-year-old Gus Wenner to head of digital. The son of company chairman Jann Wenner, Gus had been running the business and editorial sides of RollingStone.com for the past year. Now he’ll oversee Us Weekly and Men’s Journal as well. We called up Gus to discuss the move.

You were pretty inexperienced when your father put in you in charge of a big national brand last year. Did you feel ready?
He’s tough. I have a lot of faith in his judgment. The fact he has shown that faith in me is an honor and responsibility. The onus is on me to be very effective.

What’s your expanded role going to mean for the sites?
I’m extremely excited. There’s just so much good talent at Us Weekly and Men’s Journal. In Rolling Stone, there was a lot to do in rebuilding teams and editorial staff and product staff, and now we have an amazing staff to work from. When I came on, it was somewhat siloed. But [now] the collaboration between the print editors and digital editors is really natural. I’m very close with the print editors, the majority of which I’ve known since I was very little. There’s a lot we can do online to support [print] and vice versa.

Rolling Stone is a national brand that does important political and cultural stories. Can that succeed on the click-driven Web?
It can absolutely work. The fact we can write about what we believe in, that’s what keeps me going. We’re doing a big package that will be online-only in the beginning of July about gun control laws. It will be about 12 stories canvassing the landscape of gun control today. That’s the kind of thing I really love. Figuring out how to bring it to life on the digital platform is also really exciting.

So what’s your role in the edit process?
I lead that process. But really, all I’m doing is listening to a group of really smart people.

Speaking of editorial, where do you come down on native advertising?
There’s a great opportunity to create a great editorial idea that requires funding by bringing on a sponsor that believes in it. There’s a series we’re doing with Patrón, Rolling Stone Films, that are eight to 10 documentaries. It’s just an example of something we really wanted to do, and this is helping make it possible. It just has to be clearly marked. I don’t want to lead our audience astray. As far as my generation and young people go, they’re really great at sensing what’s authentic and what’s not. Young people are smarter than ever.

Your father is regularly described as a latecomer to the Web. What’s the company’s stance now?
David Kang, who was our chief digital officer, was promoted to chief revenue officer, so he’ll be overseeing ad sales across all the digital properties [along with print]. I think that’s a very powerful statement about how this company sees digital and very evocative about how my dad thinks of digital.

A year ago, it was reported that you didn’t have a Twitter account. What’s happened since then?
I check Twitter every day in terms of everything we do. Not to say I don’t value the importance of Twitter. Because [laughs], you know, I’m not going to say anything bad about Twitter. I’ve got a lot on my plate. Twitter feels time consuming.

You’re aware some people say you just got the job because you’re the boss’ son. How do you deal with that?
I just focus on the task at hand. Rolling Stone’s traffic is up almost 50 percent; revenue is up significantly as well. It’s not just me; it’s a total group effort. But keeping people excited, that’s huge. Walking around and feeling the energy and collaboration is great.

Your father has said that the path is open to you to take over the business some day. Can you see yourself in that role?
Um — I really am very focused on this current job. I haven’t thought too much beyond that because there’s too much to do.