The global rise of ad blocking in 4 charts

Ad blocking is no passing fad.

One of the most pressing problems that publishers don’t like to talk about, ad blocking has gone from a fringe issue to a mainstream concern that’s having an impact on publishers’ bottom lines. And it shows no signs of letting up. Here are four charts that show why it’s here to stay.

Interest in ad blocking is on the rise


One clear sign that there’s more interest in ad blocking is just how many people are searching for them. Consider, for example, the increase in the number of Google searches for “ad block,” “adblock plus” and “ad blocker.” Searches for all three have climbed steadily over the last few years, particularly between 2013 and 2014.

…and so are the downloads.

Interest in ad blocking correlates with an increase in usage numbers. The global number of monthly ad blocker-tool users has climbed to 144 million in 2014 from 21 million in 2010 as more people start using tools like Adblock Plus and Adblock Edge, according to data from PageFair, a company that measures publishers’ ad blocking rates. AdBlock Plus, the most popular of the tools, says it has averaged 2.3 million downloads a week since 2013.

Gaming sites are feeling the burn

While ad blocking is an increasingly pressing concern for all publishers, it’s not affecting them all to the same extent. On the typical gaming site, for example, ad blocking rates top 50 percent, while those for fashion and lifestyle sites typically are closer to 35 percent, according to Secret Media, which gives publishers tools to circumvent ad blocking. (It should be noted that Secret Media, like PageFair, has a vested interest in making the ad blocking problem seem larger rather than smaller.)

The disparity makes sense if you consider who’s going to these verticals. Typical readers for a gaming site, for example, are young, male and tech-literate, making them far more likely to use ad blockers.

Ad blocking is a bigger issue for European publishers 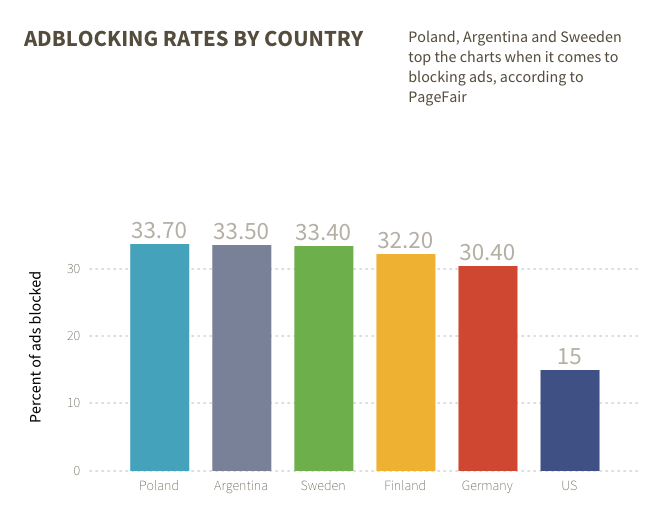 Ad blocking rates also vary from country to country. While ad blocking rates are closer to 15 percent in the U.S., they top 30 percent in the likes of Poland, Finland and Sweden. Germany, another country with a high ad blocking rate, has become ground zero for the battle between ad blocking and the publishers which want to see it go away. The owners of Germany’s Die Zeit and Handelsblatt sued AdBlock Plus owner Eyeo GmbH, claiming that the tool is “illegal and anti-competitive.” German courts, however, have ruled in Eyeo’s favor.

“I personally suspect that in some of these countries, citizens are more concerned about their personal privacy, perhaps for historical reasons,” said PageFair CEO Sean Blanchfield.