Foursquare goes beyond the check-in with passive tracking

Foursquare no longer needs users to “check-in” in order to know what places they visit. In fact, the location-based social network doesn’t even need users to be active on their service at all to track their whereabouts. Foursquare, like Google before it, is constantly, passively tracking people’s smartphone locations and showing that data to advertisers, according to agency executives briefed by the company.

Foursquare’s constant location tracking is integral to its new “passive notifications” feature — push note-like messages sent to users’ phones when they’re near a particular establishment. If you’re walking by a bar in a new neighborhood, for instance, Foursquare can serve you a notification about how good the house cocktail is there. Foursquare CEO Dennis Crowley has said the feature is the realization of what he’s always envisioned Foursquare becoming: a service that suggests the best places around you to eat, drink and see.

The suggestions are nice, but they’re predicated on the app’s ability to track its users’ locations at all times.

“We are giving an introduction/showing agencies how real-time recommendations work, but this is purely to give them an idea of where Foursquare is headed product-wise, not ad-product-wise,” Foursquare said in a statement.

Passive location tracking on iPhones is made possible by “Background App Refresh,” a feature Apple introduced in September when it released iOS7, the most recent version of its mobile operating system. Background app refresh allows “apps to refresh their content when on Wi-Fi or cellular, or use Location Services, in the background,” according to iOS7’s settings portion.

“In the background” refers to how Android and iOS apps continue to run after a user exits out of them. (Apps are similar to tabs on a Web browser in this way; they keep running even if you’re not directly interacting with them.) When Android and iOS users opt in to sharing their location data with Foursquare, then, they’re also agreeing to share their location data with Foursquare when they’re not even using it. The only way to stop the constant data collection is to “force quit” the app — manually turn it off — or to turn off location sharing (which would render Foursquare useless).

Foursquare conducts passive location tracking on Google’s Android mobile operating system by checking a user’s location every few minutes to determine whether he or she should receive a recommendation.

Foursquare is taking advantage of this passive data tracking by telling advertisers it can track users’ store visits even if they don’t check-in.

Execs briefed on Foursquare’s passive location tracking program said that the company is not currently trying to sell its store visit data. Rather, Foursquare is making the agency rounds so it can show how its data could inform marketing plans were agencies to become interested, according to execs whom Foursquare has spoken to.

Agencies will likely jump at the opportunity given how enthusiastic executives tend to be about location data in general, and Foursquare data, in particular. Foursquare’s constant data tracking will provide particularly keen insights into shopping patterns, one exec said. Marketers will be able to glean, for example, whether people who visit Coffee Shop X are likely to shop at Clothing Store Y around the corner, or vice versa.

“The disclosure mechanism for these apps is pretty weak,” Dan Auerbach, former staff technologist at the Electronic Frontier Foundation, said in a previous interview. “I think there’s a gap between user expectations and what apps are really doing.”

Of course, Foursquare is not the only company passively tracking people’s locations. Facebook, Foursquare, Google and Google Maps are all capable of background location tracking on iPhones. 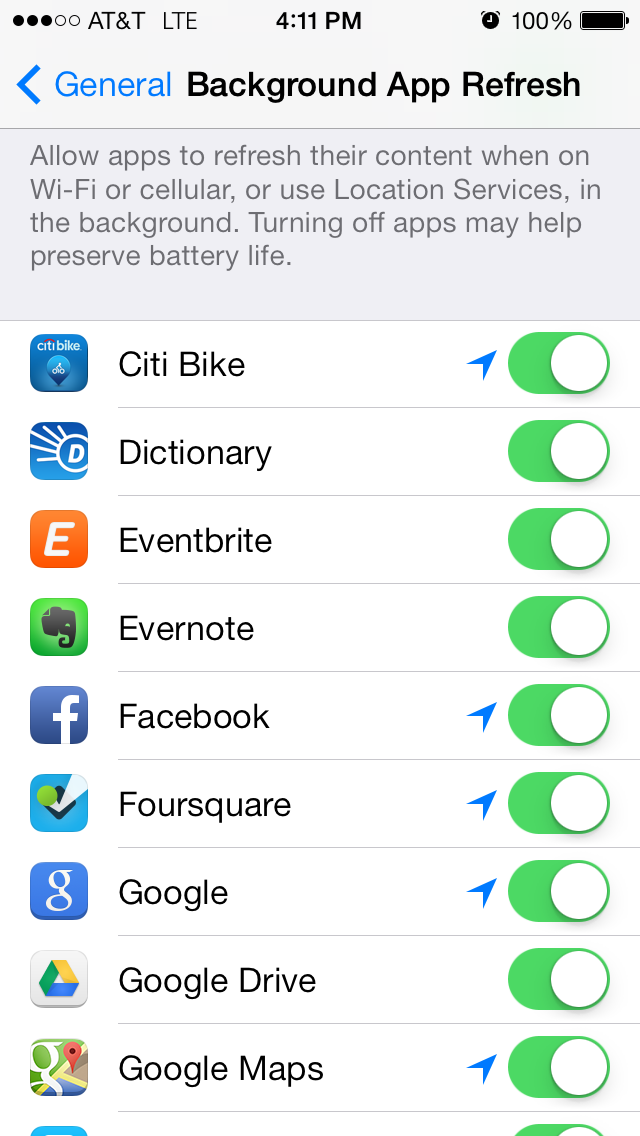 Facebook spokesman Jonathan Thaw said that while iOS7 allows Facebook to collect location data in the background, it is not currently taking advantage of that capability.

For its part, Foursquare is aware of the program’s potentially Orwellian vibe and is thus rolling it out judiciously, one exec told Digiday — on background, naturally.