Forbes Media Tests the Waters For a Sale 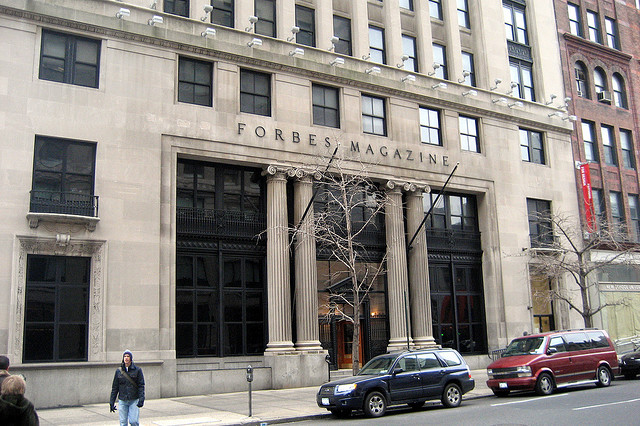 Forbes Media is exploring the idea of a sale.

In a memo distributed on Friday to Forbes employees, CEO Mike Perlis said that the 96-year-old company is “organizing a process to test the waters regarding a sale of Forbes Media.” The company, he said, has hired Deutsche Bank to represent it. According to a source familiar with the proceedings, the company believes it will sell for between $400 and $500 million.

If Forbes does indeed sell, it would join a growing list of legacy print companies to have recently changed hands, including Newsweek and The Washington Post. As a sign of the times, ad revenue declined at Forbes declined 7.5 percent to $165.7 million for the first nine months of 2013, according to the Association of Magazine Media. In the third quarter, Forbes ad pages dropped 1 percent from the same time last year, though print ad dollars were up 3 percent, according to the Association of Magazine Media.

And yet online, Forbes has enjoyed some notable success lately. The site has more than doubled in traffic from 2010 to now, as it sees 26 million uniques per month compared to the 12 million per month in 2010, according to comScore. A big reason for that: Forbes’ contributor network, which opened the door for the roughly 1,000 subject matter experts who use the platform to opine and inform on a bevy of topics, from finance to tech to sports.

Perlis wrote in the memo, “As a result of your tremendous work, we have received more than a few ‘over the transom’ indications of interest to buy Forbes Media.  The frequency and serious nature of these overtures have brought us to a decision point.”

Three years after introducing its Brand Voice platform, where brands can publish directly on Forbes.com, the media company claims ad revenue for Forbes.com has increased 35 percent. Brands pay between $50,000 and $70,000 for a minimum three months to create content on the site. The company has said that the last six quarters have been in the black and that 2013 is expected to be its best financial performance in six years.

Of total ad revenues, digital now makes up 55 percent compared to print’s 45 percent. This is a far cry from 2008-2010 when the company went through three rounds of layoffs and it was reported to have an operating loss of $19.7 million in 2009 and an operating income of $2.7 million by 2010.

Forbes has also been aggressive on the programmatic side, selling inventory on Google’s ad exchange, AdX and through the DoubleClick Ad Exchange. Whereas many publishers have private exchanges, the Forbes exchange is open to all advertisers to bid and has no price floors.

Additionally, revenues from licensing (international editions, financial services, Forbes wine club and real estate) and conferences are expected to increase 75 percent over the three-year span from 2010-2013.