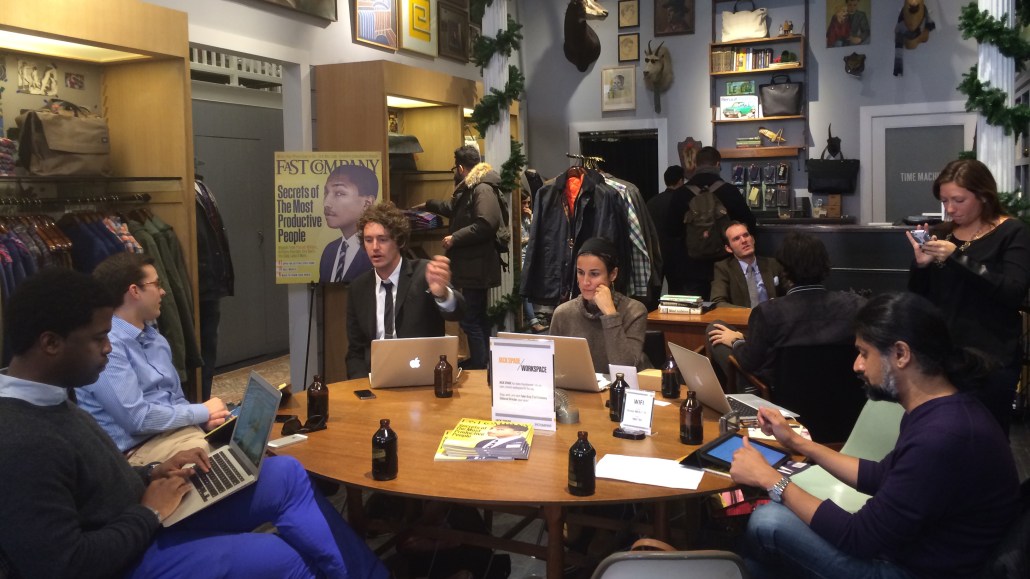 Ensconced in the center of the Jack Spade shop, amid the $200 Fall dress shirts, Fast Company’s editorial director, Tyler Gray, held court yesterday with a few entrepreneurs at a time as part of the Jack Spade Workspace, an effort by Fast Company to show its eagerness to encourage the startup ethos.

Would-be entrepreneurs waited around a table for an unscheduled meeting with the editor. Representatives from Google Now and Evernote were also on hand throughout the day. Around 20 entrepreneurs in total were granted the chance to speak with Gray, though he estimates the number was probably double that after factoring less formal chats.

“Some entrepreneurs were very early stage – everything for an idea for a parking app, to an app or social-driven service that would help you decide which clothes fit, to this oh-so-millennial concept for an advice/social/life-coaching kind of thing that might have actually taken shape right there in the moment at Jack Spade,” said Gray. “The two 23-year-olds behind it are going to get offensively rich, and I’m going to get to … write about them.”

The Fast Company-Jack Spade workspace took its cue from trendy collaborative spaces and incubators like WeWork and General Assembly. Only this spot, located in New York’s tony SoHo neighborhood, had a decidedly splashier vibe to it. Gray sported a suit, tie and fashionably disheveled hair while fielding meeting after meeting of Stumptown coffee-fueled startup CEOs eager to hear his opinion.

“Anybody can sling beers in a cool clothing store and people will come,” said Gray. “If I was just going to do a personal appearance like some radio DJ at a used car lot, that might end up being disappointing on a number of levels.”

Other publishers eager to curry favor with startups have held similar pop-up stunts. WSJ’s Tech Cafés, typically held at popular coffee shops in cities like New York and London, often invite local tech enterprises for a day-long event with panels. The Jack Spade Workspace, however, was intentionally a vaguely promoted event, since Fast Company wanted to experiment with the format.

“Tyler came up with the idea that in lieu of a panel for 20 minutes, he could just just set up shop there for a full day of meeting people and interacting with readers,” said Maggie Weinberg creative services director for Fast Company. “And then at night we could still have cocktails.”

Gray felt that the event was similar, albeit on a much, much smaller and personable level, to Fast Company’s Innovation Uncensored event held in New York and San Francisco. Fast Company hasn’t had a retail store event, though has had other custom event partnerships, like cocktails and conversation with tech industry leaders for Aloft hotels.

“One of our influences for the space is a mid-century office,” said Jack Spade store manager Anton Briones, evoking scenes from “Mad Men” and  “The Best of Everything.” “It’s a time when design met business and creativity. An event like this fits in perfectly with what we’re trying to do.”

Fast Company’s temporary co-branding with Jack Spade was an attempt to “bring the pages of the magazine and website to life” through Jack Spade’s wares and oddities, explained Christine Osekoski, Fast Company’s publisher.

“At the end of the day, all I could produce was sweet, sweet dreams,” said Gray. “I was beat. I will say without a doubt that stories will come out of the experience.”