Platforms’ efforts to draw in readers and court publishers are paying off: When it comes to news consumption, the role of Facebook and Twitter continues to rise.

Facebook and Twitter have been on the news offensive. Facebook in May took the wraps off Instant Articles, its initiative to get publishers to post directly to its platform. Twitter has long been the go-to real-time news feed, but it has also pushed into real-time video with the launch of Periscope earlier this year. Even Snapchat is angling for a role in young peoples’ news diet with its Discover function, which it made more prominent this week.

The platforms’ rise as news sources is fraught, though. Facebook, which has dominated publishers’ traffic, is more likely to surface fluff over serious news — a discrepancy it pins on the user-driven objectivity of its algorithm.

“There are multiple things at play that determine what people see in their Facebook feeds, including their own choices, choices of those in their networks and also the choices that Facebook makes with its algorithm,” said Pew Research director Amy Mitchell. “But there’s still a lot that we have yet to understand.”

Facebook’s and Twitter’s share of news consumption continues to climb.

With efforts such as Instant Articles and its trending sidebar, Facebook has tried to make the case that it can be a viable source for breaking news. But that crown still belongs to Twitter, which 59 percent of users said was their source for real-time updates, Pew found. At 31 percent, Facebook’s role for news is half as significant.

As Facebook usage increases, so does the amount of trust people have in it. A recent study from Acquity Group found that many people trust their Facebook feeds more than they trust newspapers. That disparity was clearer with young people. Twenty-nine percent of college-aged consumers and 32 percent of millennials ranked their trust in Facebook over sources such as email and television. Older consumers, in contrast, were more likely to put their faith in traditional media. 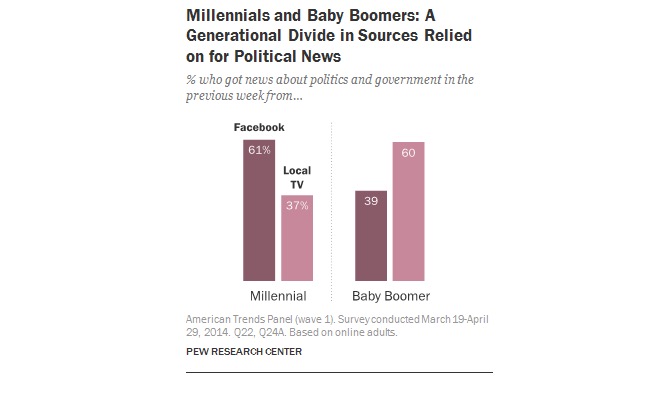 Generational differences in media consumption are most visible in how they get political news. While 61 percent of millennials said that they got their political news from Facebook, the same number of Baby Boomers said television topped the list of places where they got political news, according to a Pew report from June.

While Facebook and Twitter command the bulk of news-consumption habits, millennials are also getting their news from other sources. YouTube, for example, is a significant news sources for millennials, 29 percent of whom say they check it once a day, according to the Media Insight Project. One source that’s not so big among younger people: Twitter, which just 13 percent of millennials said they checked daily.