Both Facebook and Twitter have the advantages of Google as an ad platform role model. That means complementing the high-touch sales focused on big brands and their agencies with simple, automated offerings for the estimated 23 million small businesses in the U.S. At stake is the nearly $140 billion spent on local advertising, per advertising research firm BIA/Kelsey  — a number that’s exponentially greater worldwide.

Just this week, Twitter kicked off the Small Business Association’s annual National Small Business Week celebration by inviting hundreds of small-business owners into its corporate office to watch presentations from entrepreneurs, Twitter execs and House minority leader Nancy Pelosi, among others. Twitter also published a small-business guide to teach small businesses how Twitter can be used for business purposes. Facebook has spent Small Business Week showcasing small shops, like Stittsworth Meats and Adroit Theory Brewing Company, that have used Facebook to grow their companies. Facebook is even extending its small-business outreach into the summer: On June 3, Facebook will embark on Facebook Fit, a five-city, summer-long cross-country event aimed at helping local businesses use digital tools to improve their bottom lines.

The PR efforts are needed salvos in the war for small-business attention.  For all its size, the small-business market is notoriously difficult to crack. Local businesses need simple solutions and don’t have the time or sophistication to become digital marketing experts. Small businesses devote only 3 percent of their advertising budgets to digital channels, compared with the 15 percent national marketers allocate to digital, according to a March 2013 study from Boston Consulting Group.

That means education is paramount.

“There are a lot of small businesses that still resist online advertising in general,” Eric Liguori, vp at the U.S. Association for Small Business and Entrepreneurship, told Digiday. “A majority of small-business owners didn’t grow up in the digital age. Digital still seems a little nebulous to them.”

Facebook and Google are ahead of the teaching curve in that respect, Ligouri added. Google is a particularly formidable foe. Of the search giant’s million advertisers, most are small businesses. And the popularity of Google Maps on mobile means that small businesses are likely to continue to buy Google as mobile usage continues to increase.

Facebook’s allure for small businesses is that it supposedly allows for unprecedented level of ad targeting accuracy, important for businesses with narrow target demographics and limited advertising budget. Twitter offers small-business owners the opportunity to pay to build a following in their area and then access all of them for free. (Some agencies and brands have recently criticized Facebook for not being able to reach the Facebook users who have liked or followed their pages.) Google, meanwhile, allows small-business owners to claim their Google Maps location for free, and its AdWords product lets businesses pay for adjacencies next to search terms related to their business.

A March 2014 study from BIA/Kelsey found that Facebook is the most popular media channel among small businesses. More than half (57.9 percent) of respondents said that they use Facebook to advertise their small business, with 43.2 percent saying they use newspapers. Sponsorships and Google were used by 37.9 percent of respondents, and email marketing was slightly less popular at 36.8 percent. 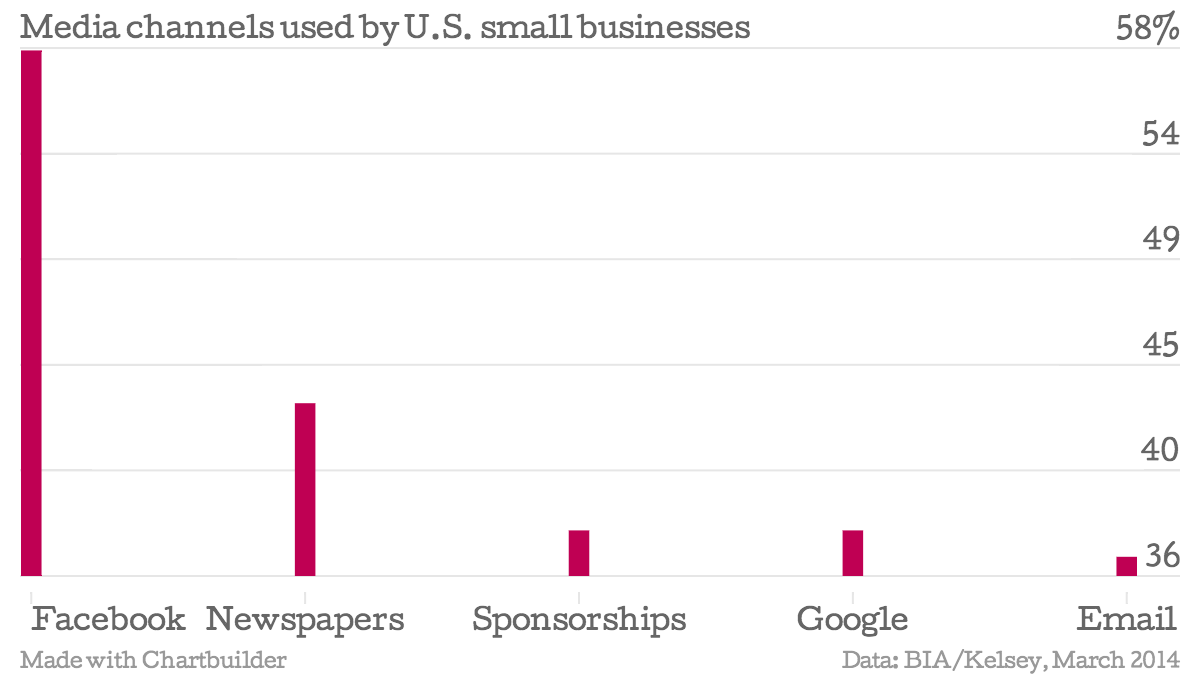 All hope is not lost for Twitter, however. Facebook burned quite a few local businesses, which spent years urging its customers to “like us on Facebook,” only to find Facebook would turn around and not show businesses’ updates to those customers — unless, of course, they paid for ads.

“You can have a fifth of the following on Twitter, and it’d be a better buy,” said Tony Maggiotto, business adviser at the New York State Small Business Development Center

Maggiotto added that Facebook could increase its value to small-business owners by teaching them how to more precisely target their desired audience when using paid promotions. Again, the key is education.

“Small-business owners might have a LinkedIn profile, and maybe a Facebook profile,” Maggiotto said. “Other than that, everything scares the shit out of them.”