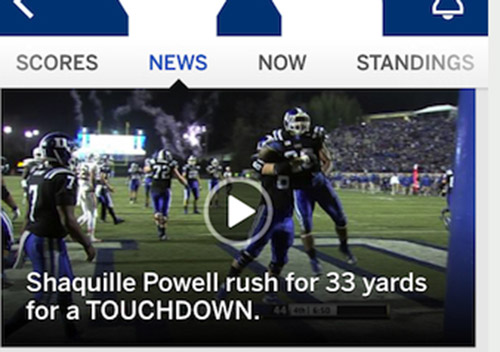 ESPN’s flagship show has finally gotten the app sports fans require. The sports media giant’s new SportsCenter app is a reimagining of its ScoreCenter app – one that adds both a layer of personalization and mobility.

Content-wise, the app is nearly identical to its previous ScoreCenter iteration in that it will continue providing users with scores, videos and news stories pertaining to their favorite teams and the sports world at large. Now, however, users can choose which teams they’d like to follow in order to receive news alerts, or to get updates mid-game. The “Now” portion of the app will aggregate tweets from ESPN reporters and ESPN’s corporate accounts. The new app is also easier to navigate thanks to a sleek new interface.

The major difference, of course, is the name. Now called SportsCenter, the app will bear the same name as ESPN’s most important show.

It was odd that ESPN chose to name the older app ScoreCenter in the first place given the show SportsCenter has become such a cultural touchstone. By aligning the names, ESPN gives reminds mobile users that SportsCenter is the go-to place for sports news, even when they’re on the go.

The app is also focused on helping ESPN’s advertisers grow their own brands through in-stream native products. Coors Light’s “Cold Hard Facts,” for example, will be included in the news stream.

The change comes amid ESPN Digital’s audience rapidly transitioning from desktop to mobile devices.  ESPN bragged to advertises in late October that its mobile audience (47.3 million unique visitors) eclipsed its desktop audience (46.1 million uniques) for the first time ever in September 2013. ComScore confirmed these figures.

But that’s not necessarily good for business. Mobile CPMs are inherently lower than desktop CPMs, making it harder for ESPN to monetize its audience. ESPN’s overall traffic in September (more than 72.6 million uniques) might have been highest in the sports category that month, but Yahoo — and its content partner NBC — had more desktop uniques (more than 52.9 million to ESPN’s 46.1 million).

Of course for ESPN digital media is ancillary to the company’s success. The network’s revenue is predominantly driven by its cable TV business.

ESPN Digital, then, remains a way to keep sports fans engaged with ESPN when they’re not in front of their TVs. No wonder ESPN renamed its second screen service to reflect the name of its most important first screen show.