End of an era: Media buyers are ditching the much-hated RFP 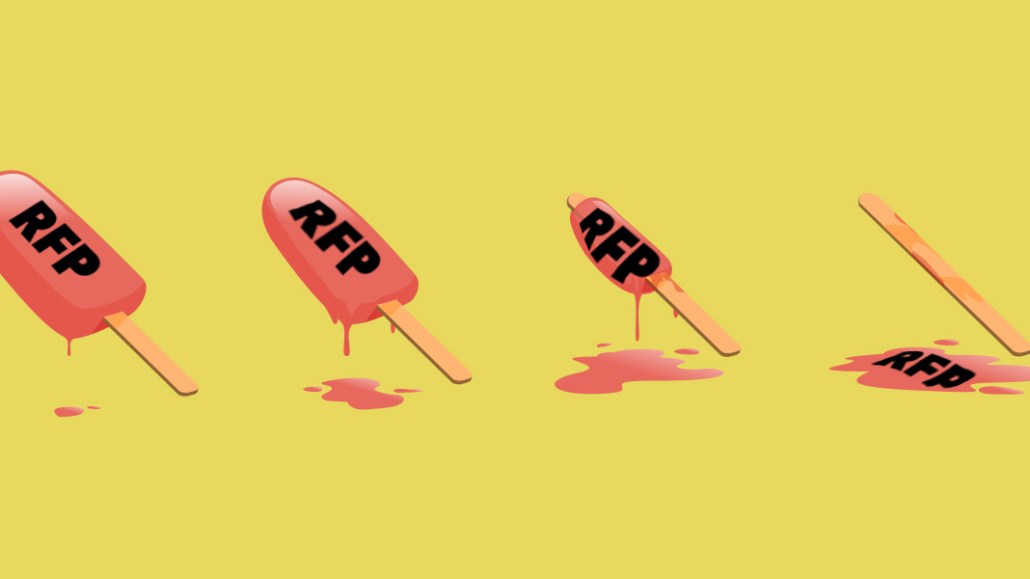 Despite all the automation that’s come to media, the request for proposal has hung around like a bad retargeted ad. Sellers chase RFPs but only begrudgingly. They complain they put a lot of effort into responding to them but rarely get feedback from the agency. They can even be the instrument of abuse, as when a vendor offered to send agencies lobster rolls in exchange for RFPs.

And many agencies, believe it or not, agree. Buyers say RFPs often feel dashed off. Now some are determined to if not eliminate, scale back their use. Omnicom’s PHD US is increasingly eschewing the RFP in making media-buying evaluations, chief investment officer Craig Atkinson said. About half of Mediassociates’ media-buying evaluations are done using RFPs, down from about two-thirds five years ago, estimated Ben Kunz, evp of marketing and content there. Reshift Media, a digital marketing agency, has never sent out an RFP in its six-year history, said Kirk Allen, COO and co-founder of Reshift. “It’s pretty old-school thinking,” he said of the RFP.

Driving the shift is that agencies are consolidating their spending with fewer media sellers so there’s less need to cast a wide net with the RFP. More buyers are pursing the mantra of “fewer but deeper” relationships with buyers, especially as bigger chunks of budgets are run through programmatic (and, of course, Google and Facebook) as the workhorse for campaigns to get reach.

As a result, direct-sold campaigns have grown more original, customized and often involve custom content the media company creates. The standard RFP, with its focus on audience and ad specs, has become anachronistic.

“As soon as you get into a customized space, it’s better to take it face to face,” said Barry Lowenthal, president of The Media Kitchen. That’s why Reshift Media avoids the RFP, too. “It’s templated, and we have the resources to figure out what the strategy should be,” Allen said. “Most of the work we do is custom content to the [media] brand, and we believe it should be original to the brand.”

Another reason is that media companies themselves have gotten more complicated, Kunz said. He pointed to two he knows, Madison Logic, a lead generation marketer; and Epocrates, a mobile app used by health care providers, as examples of companies that would be hard to evaluate using the traditional RFP approach.

“The larger media vendors have become platforms with a lot of businesses,” he said. “It requires hard work to understand the value of different media outlets. There are all these nuances an RFP has a hard time getting to.”

Some media sellers say they’re getting as many, if not more, RFPs as ever, but that they see a shift in that their biggest deals don’t start with RFPs. The Atlantic said it’s gotten 37 percent more RFPs so far this year versus the year-ago period. At Bustle, they’re up 20 percent, said Jason Wagenheim, the CRO there.

Most of The Atlantic’s business is RFP-driven, but there’s been a decline in standard RFPs and a “huge increase in content- and ideas-driven RFPs,” said Hayley Romer, svp and publisher of The Atlantic. RFP campaigns are still the majority of the business at Bustle, but as its sales organization has matured, non-RFP campaigns have become “unquestionably the majority of our higher-revenue deals,” Wagenheim said.

Agencies said that instead, they’re leaning on research, conversation with vendors and in-person meetings with individual or groups of sellers. PHD holds sessions with multiple sellers, who “love this idea because they waste so much time chasing RFPs that their win rate is often very low,” Atkinson said.

Still, it’s too soon to call the RFP dead, buyers and sellers said. Scale is a part of it; one client alone might have dozens of campaigns a year, and it’d be too time-consuming to do briefings with vendors for each one. It’s an exaggeration to say all media has gotten so complex that the RFP won’t do. One publisher sees the RFP being used as much as ever, a symptom of a troubled agency business model that has many understaffing their biggest accounts and media planning arms. “It’s just agencies saying things they want to be true,” this publisher sniffed.

“I don’t see the RFP going away, but we want to be more efficient about the process,” said Tom Morrissy, president of the agency Noble People and a former longtime publisher. “The RFP keeps us in the pulse of what’s happening out there. Sometimes, there are new changes that come up in an RFP, like a new data offering or franchise. People are trying to put their best foot forward with the RFP.”