Vimeo sticks to its no-ads approach 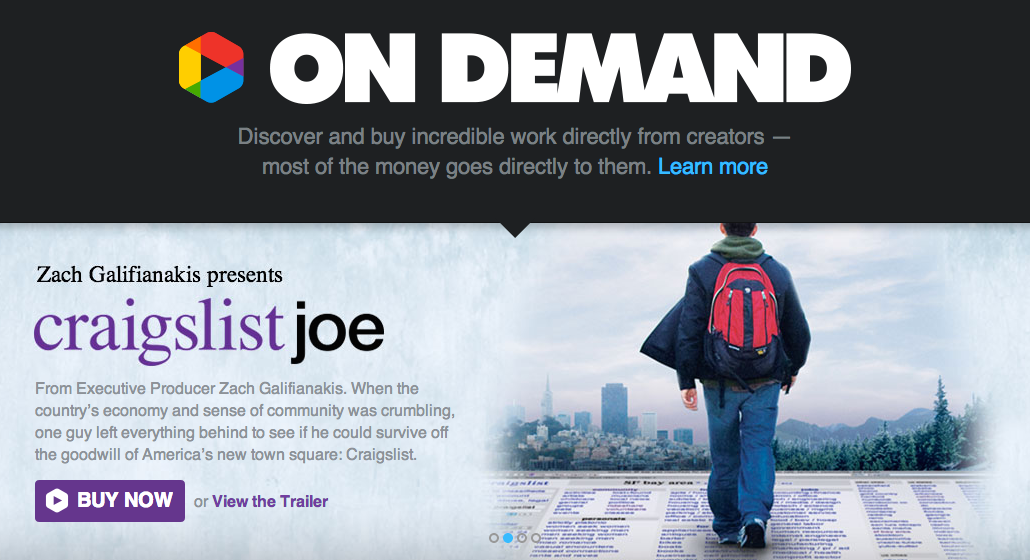 This is the second installment in Digiday’s coverage of SXSW, which runs March 7-14 in Austin, Texas. The series is sponsored by Dstillery, the pioneer in audience targeting for brands.

For most platforms, the how-to-make-money question is answered by advertising. Not so for Vimeo.

The 10-year-old video-sharing platform has built a business by eschewing advertising, choosing instead to make money by providing premium services to its community of video creators. That’s a bold approach, considering its giant rival YouTube built the digital video advertising business, which generated an estimated $5.6 billion last year, according to eMarketer.

“We don’t do the interruptive pre-roll type of stuff,” said Vimeo general manager Greg Clayman. “Pre-roll is not something our users particularly enjoy having on their content.”

There’s no plans to change that any time soon. The IAC-owned company announced on Thursday, in advance of SXSW, it was investing $10 million in filmmakers who use Vimeo on Demand, the year-old online marketplace that allows filmmakers to sell their ad-free videos directly to consumers.

The $10 million will be allocated to filmmakers willing to debut their work exclusively on Vimeo on Demand, and keep it there for approximately 30 days. Vimeo is specifically looking for films that have received at least $10,000 in crowd-funding and for films that are making the film festival circuit. For festival films, Vimeo is offering resources — marketing dollars and website development — in exchange for the films making their digital premieres on Vimeo on Demand. Vimeo takes a 10 percent commission on Vimeo on Demand sales, with the rest going to the creators.

The investment is not only a testament to the success of Vimeo on Demand, but to Vimeo’s commitment to valuing quality over content. The company is leaving millions of advertising revenue on the table, but to do otherwise would be to betray its value proposition to both its filmmakers and viewers.

Vimeo’s aversion to pre-roll ads is significant given what it could make were it to embrace pre-rolls. Victoria Steinberg, director of advertising strategy at video ad tech company YuMe, estimated that Vimeo could earn an additional $25 million per year if it were to serve ads against its videos.

That would constitute two-thirds of the revenue ($37 million) Vimeo earned in the 12 months leading up to October 2013, according to parent company IAC’s third quarter 2013 earnings report. Most of that revenue came from Vimeo creators who pay for Vimeo’s premium features, which can cost as much as $199 per year.

A large portion of that spend is going to YouTube, which eMarketer expects to earn $1.22 billion in ad revenue this year.

But while YouTube has seen modest audience gains in the last year, Vimeo’s audience has nearly doubled. YouTube remains the leading video site in the U.S. with more than 157.5 million unique visitors in January 2014, a 5 percent increase from the same month a year ago, according to comScore. Vimeo’s audience, more than 41.6 million U.S. uniques in January 2014, has grown 82 percent over that same time period.

That’s not to say Vimeo isn’t brand-friendly. One of Vimeo’s revenue streams involves the company matching large brands like Airbnb and Lincoln with its creative community to produce product-based videos.

But Vimeo believes its future lies in marketing indie films and selling them straight to consumers, and it’s not interested in funding that endeavor with advertising dollars. For example, Vimeo will be powering the website for “The Internet’s Own Boy,” the Kickstarter-funded documentary about late Internet pioneer Aaron Swartz. The documentary was nominated earlier this year for the Grand Jury Prize at the Sundance Film Festival.

Vimeo will screen “The Internet’s Own Boy” on Friday at SXSW in Austin, Texas. Throughout the rest of the week, Vimeo will be watching movies shown at the SXSW’s film festival, looking for a lucky few to distribute through its platform.