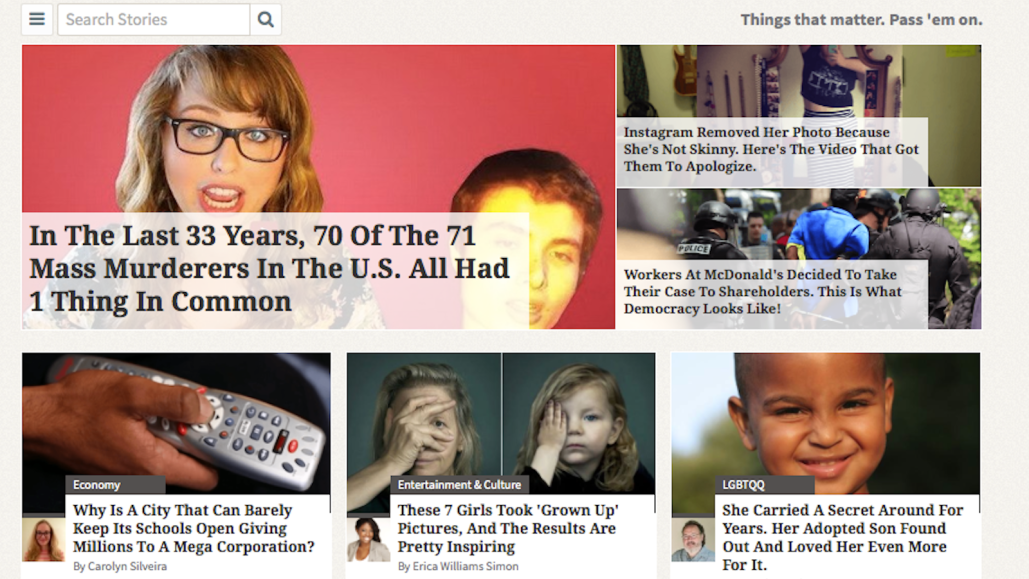 Upworthy-style headlines that dangle a provocative question or offer an emotional promise are everywhere. Example from just yesterday: “The Wildest Thing About This Job Is Not Even How Disgusting It Is.”

So it was inevitable that Twitter would turn on clickbait, with accounts like HuffPoSpoilers and Upworthy Spoiler (which have in turn spawned smaller knockoffs like Rolling Stone Spoilers and Wired Spoilers in the U.K).

These self-appointed guardians of social media say they’re sympathetic to the dilemma online publishers face right now, even as they call out their abuses. “It’s not to undercut the Huffington Post,” said Alex Mizrahi, who created the HuffPoSpoilers account. (Sample tweet: Got into music but still takes the occasional acting gig RT @HuffingtonPost What really happened to Steve from “Blue’s Clues” will shock you.)

“I understand people’s need for clicks,” said Mizrahi. “But their click bait levels are frustrating. There’s the same formula over and over.” Introducing the clickbait spoilers:

HuffPoSpoilers
Author: Alex Mizrahi, social media associate at Blue State Digital
Twitter bio: I give in to @HuffingtonPost click-bait so you don’t have to
Followers: 35,700

Mizrahi started the account in 2012 while between jobs, and two years later, he’s amassed nearly 40,000 followers by tweaking the online publisher’s formulaic approach to headlines.

“If you’re from Africa, why are you white?” RT @HuffingtonPost @AmandaSeyfried reveals her favorite “Mean Girls” quote

Pack less. RT @HuffingtonPost: How to not overpack for a weekend getaway https://t.co/7SgrbgJigL — HuffPo Spoilers (@HuffPoSpoilers) May 25, 2014

For the most part, the tone is good-natured; the Huff Post has even gotten in on the fun. Mizrahi said he just wanted them to see “how silly they are sometimes.” While he’s “never heard from Arianna,” given the chance, he said, “I would just ask her an open-ended question about how she feels about the Huffington Post Twitter strategy and if she would explain the rationale.”

Stempeck became interested in Upworthy and its role in the curation debate and the future of news while blogging for MIT Center for Civic Media. Stempeck actually likes Upworthy’s social justice angle; it’s the use of misleading and emotional manipulative headlines that bothers him.

“I’d click and read every one of their links,” he said. “It started to annoy me because I like concise information. What Upworthy and others are doing is adding more barriers between the users of that information.”

Stempeck sees his account as a public service that saves people from wasting time, with tweets like this one:

Stempeck’s followers include Adam Mordecai, founding curating editor at Upworthy, who had some fun with the account on April Fool’s day:

“One of the most prolific users of pot is an adorable 6-y/o girl.” (via @UpworthySpoiler) https://t.co/J8xrk7pI4a Pot Oil prevents seizures. — Adam Mordecai (@advodude) April 1, 2014

Beckman got the idea for Saved You a Click while working for Bloomberg TV. “I followed a lot of news outlets and reporters, and noticed a long time ago the trend toward clickbait headlines. As the clickbait trend spread past the Huffington Post to the rest of the news industry, it seem to me there was a market for this kind of response. It just felt to me like it could be a funny response to just do the clicking for everyone.”

Beckman trolls 73 sites including Businessweek, Cosmopolitan and Time for tweets like these:

By closing lots of stores. RT @BW: How Abercrombie & Fitch plans to shrink its footprint: — Saved You A Click (@SavedYouAClick) May 29, 2014

Beckman has no illusions that his account is going to change the way headlines are written. But he hopes that by gently shaming clickbait’s worst practitioners, he’ll make Twitter a better tool to communicate and surface substantial pieces of journalism.

“There’s no stronger distribution point than social media, and you’re seeing it get abused,” he said. “There has to be a broader shift in the market away from people clicking on headlines that are not, quote, good headlines. My goal is to in some way take those links off and try to have a little fun.”