Circa looks to turn buzz into a business 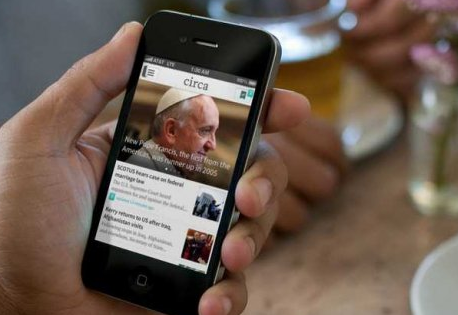 Circa launched in 2012 to much acclaim. It was a slick news app that was decidedly mobile first. By breaking down news updates into their constituent parts, dubbed “atoms,” Circa says it makes it easier for people to both read and keep up with ongoing stories. It quickly became a darling of “the future of journalism” crowd and attracted $5.7 million in venture capital.  Google and Apple even counted Circa as one of the best apps of 2013.

But despite being early out of the gate, Circa’s audience isn’t quite there yet. Circa hovers around 62nd in the iOS app store’s news category in the U.S., behind competitors like the mobile-first Breaking News and even latecomer NYT Now, according to App Annie. The story isn’t much better on the Android side, where Circa is 115th in the news category.

Now, Circa is rolling out a new version and the skeleton of a business plan. Despite headwinds, Circa CEO Matt Galligan said that he’s happy where Circa is right now.

“This is a slow-burn kind of business,” he said. “We had to prove out the model in the beginning. We had to keep evolving it. Now is really the time where we start paying attention to the numbers.” 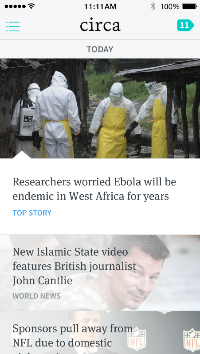 With Circa 3.0 launching this week, Circa is building on that formula, adding more robust customization features and a single update feed, The Wire, which makes it easier for users to catch up on news. Galligan said that the app is proof that, while more publishers are finally coming around on mobile, Circa’s head start still gives it an edge.

“When we look at the mobile news space now, there’s more players, but the news content that’s being produced is still not mobile-first,” Galligan said. “We’re still one of the only companies developing the news for mobile, and that drives how we work.”

Alongside the updates to its app, Circa is also tracing the outlines of its monetization plans. John Maloney, former Tumblr president, joined the company in April, and has been charged with the task of helping Circa make money.

Galligan said that Circa’s revenue is likely to come in two streams. First, of course, is advertising. The Circa app lends itself well to both standard display ads and, more notably, native placements. Core to the pitch is Circa’s “follow” feature, which the company plans to extend from big news stories to brand campaigns. The idea, according to Galligan, is that by letting Circa users opt into updates from brands they’re interested in, Circa can offer brands instant eyeballs.

It’s not exactly a new idea. “The brand ‘follow’ as an opt-in to receive branded content is a well-established formula at this point,” said Natalie Bokenham, managing partner at agency UMW. “This model works for publisher and brands that have a story. It becomes more challenging for brands that don’t fall into either.”

As of yet Circa has not named any of the brands it has partnered with.

“Any time you have users taking an active action in the medium or app they are using you have a far greater value for that user and the platform,” said Steve Carbone, managing partner at MediaCom. “Not to mention the expectation is that a “followed” user would be a higher-valued target based on the data available around their usage of the app and the stories they wish to be alerted about.”

Circa is also working on ways to license its underlying tech and CMS to other publishers, which can use it for their own products. “These are the things we want to bring to the world. We don’t want to be the only ones that have access to these tools,” Galligan said.