In a new periodic series, Cheat Sheet, Digiday will take a look at the state of media and marketing in select international markets. For our first installment, we head to Shanghai, where Marjanne Mabialah explains the state of Chinese social platforms.

China’s Internet market is growing remarkably fast: More than half a billion Chinese are online, 80 percent of those 600 million people access the Web via their phones, and they spend an average of 25 hours a week on social.

While U.S. stalwarts like Facebook, Twitter and Instagram are big in China, the market has nurtured its own set of big social platforms. Here are five major social media platforms crucial to the Chinese market — and how people most commonly use them:

WeChat
The most popular social network in China, WeChat is checked an average of 10 times day. The free messaging and calling app differs from Weibo — the mega-popular Chinese hybrid of Twitter and Facebook — in that it offers e-commerce integration: JD.com, the leading Chinese online retailer, was last year added onto WeChat as the “Shopping” channel. WeChat also comes with a built-in QR code scanner that can scan any QR code. Fifty-eight percent of consumers claim that WeChat influences their brand choice and buying process.

Youku
In 2014, Youku was the second-most popular app among Chinese users after WeChat, according to iResearch. Chinese consumers are sensitive to storytelling, and they appreciate high-quality visual content. As its name suggests, Youku is similar to YouTube: Users can watch videos, comment on them, like them and upload media content. Brands such as Channel, Burberry, Cartier or Louis Vuitton have created official brand accounts regarding the potential of Online Video watching in China.

Mogujie
Pinterest’s main Chinese rival, Mogujie, specializes beauty and fashion imagery — and offers a true social shopping experience, linked with e-commerce site Taobao. Popularity of the site was grown on the back of comments, ideas, tips and deals. Users can post pictures of which outfit they are wearing or which beauty products they are using; other users will be able to review them, like them or shop the items. More than 60 percent of purchases made via Mogujie are mobile, according to QQ Tech. It is the second-most influential network in the Chinese fashion community, according to KPMG.

Nice
With 12 million active users and 1 million pictures shared daily, Nice is the most-used photo-sharing app in China. Where Nice differs from Instagram, however, is that users can follow not only their friends but brands as well — be it the Prada shoes or Zara coat they’re proudly rocking. Brands are also opening their own accounts, creating communities around common “interests” and conducting sales through the platform.

Kimiss
Kimiss is built around cosmetics. Users rate products and leave comments about specific brands or broader trends. The website boasts more than 1 million registered users, who have commented on more than 140,000 products from more than 2,500 brands. The higher ranked a product is in its reviews, the more likely it will land on the homepage, giving it even more visibility. Brands can also advertise on Kimiss by promoting sponsored articles. 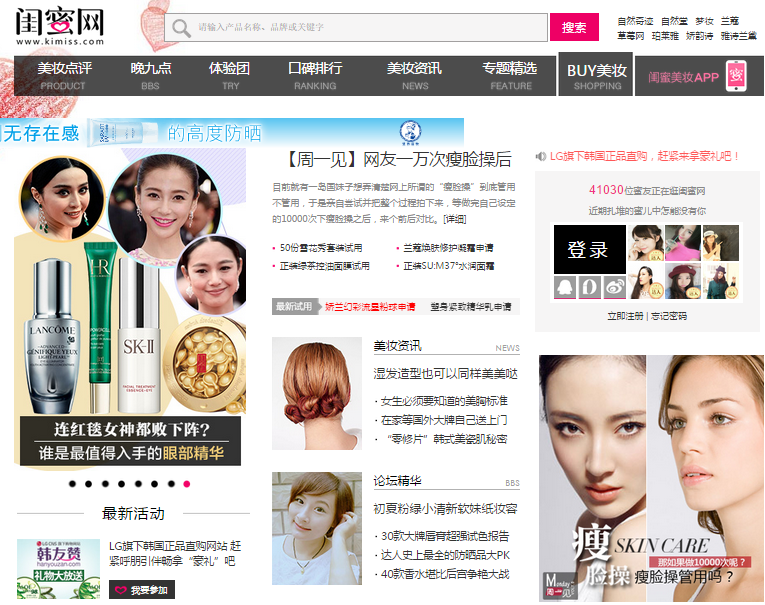