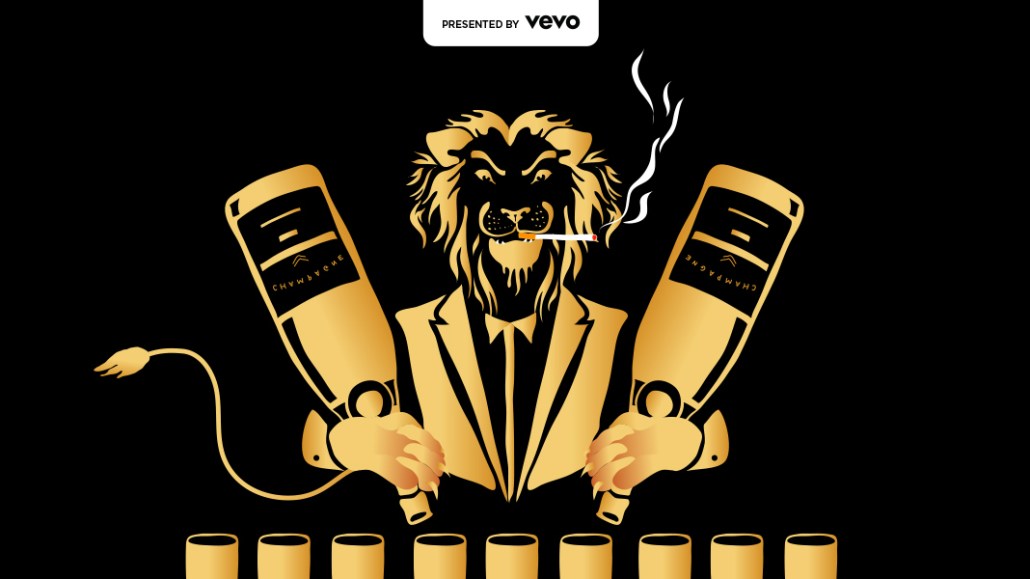 Cannes is in the home stretch. Expect to hear scratchy voices, glassy eyes and possibly a walking boot or three. So far what’s been notable this week is how the conference overall, at least in public, has decided to focus on big issues of diversity, inclusivity, even climate change. It’s clear that the Cannes Lions organizers are trying to course-correct over the perception that Cannes had become, Audemars Piguet Replica Watches in the words of Martin Sorrell two years back, “too brash.” Of course, the high-minded and sober talk goes away when the sun goes down and the Carlton Terrace stars heaving with partiers. Can’t be all homework. — Brian Morrissey

The unanswered questions of Cannes
Yes, Cannes is about the meetings, the quiet conversations and maybe even a partnership that might spring out of them. What follows are tidbits from conversations with media and ad executives the first half of the week.

Where are the interesting digital media companies?
Between course at the Digiday Media Leaders Dinner, Audemars Piguet Replica one top exec asked a simple question: What’s the most exciting digital media company out there? Others at the table hemmed and hawed. One noted that the difficulty of naming one is indicative of the pivot to reality publishing has gone through. A couple years ago, that question would have been met with talk of Vox, Refinery29 or BuzzFeed. Nowadays, those companies are struggling to meet expectations.

Will Quibi pan out?
Jeffrey Katzenberg and Meg Whitman came in hot on Wednesday, boasting $100 million in upfront ad commitments by brands such as Procter & Gamble and Walmart. But along the Croisette, people aren’t as confident about Quibi’s potential to succeed. Quibi certainly has a lot going for it: big stars, seasoned executives and a ton of investor (and now advertiser) money. Media and advertising industry insiders, however, can only shrug — at best — on whether there is an actual consumer appetite for a mobile-only video subscription service.

Why must marketers make up terrible words?
For those who appreciate the English language and precision, Cannes is not the place for you. So far this week, we have come across everything from “storydoing” to “design feeling” to “woke washing” to “storyliving.” Every industry has its jargon, but marketing sure does seem to have more than most. One tech exec noted that the empty talk and meaningless buzzwords would be so alien to product managers at a tech company to be incomprehensible. That’s a challenge not just for Cannes but the marketing community as a whole as it tries to elevate marketing within organizations that are often skeptical of marketing as just another cost center to be optimized.

Will marketers actually move dollars away from Facebook and Google?
The TV industry has shown up to Cannes in a big way; as one broadcasting executive said, it’s time for “the Empire to strike back.” But for all the talk about how TV offers premium content and more brand-safe environments than social platforms, most marketing executives — even those that shared panel space with TV executives on the beach — were hesitant to boldly blow off the platform giants. Everyone agreed that Facebook, Google and others need to improve their products, and responsibility falls on clients that control the budgets to pressure these platforms. But no one is reaching for the nuclear option just yet.

Where is the creativity?
Cannes Lions proudly bills itself as a “festival of creativity.” This was a designation used to ellide the face that Cannes saw an influx of publishers and tech platforms that changed the conversation from the roots of Cannes in advertising. But an enduring question on the minds of many publishers and marketers: Where is the creativity? One publishing exec to told me that he is very high on Snapchat, not because of big ad shares, but it is at least innovating and rolling out truly creative features. Best Omega Replica Watches By the same token, a veteran ad agency exec told me of the experience of perusing the work of the Young Lions with the thought it would make him more hopeful for the agency business. He came away disappointed, seeing a lot of vanilla work that was either impossible to actually do — Cannes is notorious for juiced-up case studies that stretch the bounds of reality — or completely overshot the mark by claiming to be about changing the world. Sometimes simpler is better.

Do marketers care about brand safety?
P&G’s Marc Pritchard is everywhere, and he often uses industry gatherings to make clear the priorities of the ad-spending giant. It was notable that Pritchard gave high marks to efforts made by Google and Facebook for the work they’ve done to clean up their platforms. There was a lot of PR around a new industry group dedicated to “responsible media.” Much of the discussion around brand safety has been superficial, however. More jaded publishing execs say don’t expect much to change soon in spending patterns. Google and Facebook have mostly skipped the discussions entirely to push messages around inclusivity and creativity.

Pinterest’s Andréa Mailard on defining Pinterest
All marketing is about solving problems for companies. For Pinterest, the key marketing challenge is getting people to understand a platform that isn’t quite like its tech peers. Andréa Mailard, Pinterest’s first-ever CMO, joined the Digiday Podcast, Cannes Edition. The spin Pinterest has for marketers and consumers: It’s all about “inspiration” and getting people to do things in real life, not stare at a screen.

The prices around @Cannes_Lions – this is a regular brasserie 😫 pic.twitter.com/vna3IQR56P

Nowhere in Cannes is safe. 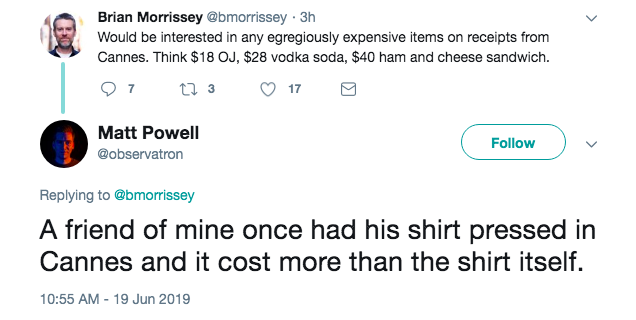 Newcomer tip
Don’t turn down a chance to visit Antibes or a villa in the hills above Cannes. You might think you don’t want to waste a half hour in an Uber, but it’s well worth the time — and worth the peace that exists outside the madness of Cannes.

What to do
The Wall Street Journal is hosting a conversation with Jeffrey Katzenberg, founder of Quibi, which is using Cannes as its coming-out party. Head to the Journal House by all the yachts in the harbor. 9am.

If you haven’t heard enough of P&G’s ubiquitous marketing chief Marc Pritchard, he will be at Wake Up with The Economist at the Cannes Lions beach. He’ll be joined by the CMOs of Taco Bell and Lego. Expect a lot of brand purpose talk. 10:30am.

Make it a doubleheader. You can go directly to the WSJ House to hear Pritchard again, this time in discussion about “maintaining brand purpose in today’s hostile social media environment.” The name of the discussion alone says a lot about the direction it will go. 11:30am.

The Digiday Making Marketing Podcast is at Twitter Beach at 1pm. Come by. 1pm.

Nightcap
6:30pm: The Wall Street Journal is having DJ Mark Ronson at The Journal House, located among all the yachts in the harbor.

7pm: Live Nation has a party and concert at a private villa. Rumors are that it’s going to be either John Legend or Sting performing. Sneak into a shuttle if you can.

9pm: The New York Times is hosting a sunset BBQ on the rooftop of the Martinez. банк онлайн заявка на кредит наличными