Publishers want in on the content-recommendation game

Building an online audience is tough for a publisher to do — if they care about having a reputable brand based on editorial content that people actually want to read and share. There are content-recommendation widgets from third parties like Outbrain and Taboola that publishers can slap on their sites. (Digiday uses Taboola to suggest related Digiday stories.)

It’s easy money: Host publishers get paid when readers click out and can recycle some of their own content through the widgets. But these widgets have come under fire for purveying low-quality content and misleading ads that can downgrade readers’ trust in the site. Taboola had its own problems earlier this week when it fell victim to hacking.

That’s why publishers have come forth to try to solve the audience problem. Unlike Outbrain and its ilk, which pay the host publishers when someone clicks on the widget’s links that contain sponsored content, these ad-free content exchange platforms work by getting publishers (themselves included) not just clicks but engaged traffic, which supposedly is of more value to advertisers.

SheKnows, a publisher of women’s lifestyle content, is the latest to launch such a platform, Explorer, which it is introducing today. SheKnow’s pitch is that Explorer only lets in publishers that are handpicked and premium. When the user clicks on an article in the widget, a new screen pops up with relevant suggested content arranged Pinterest-style, theoretically leading readers to spend more time with the participating publishers. 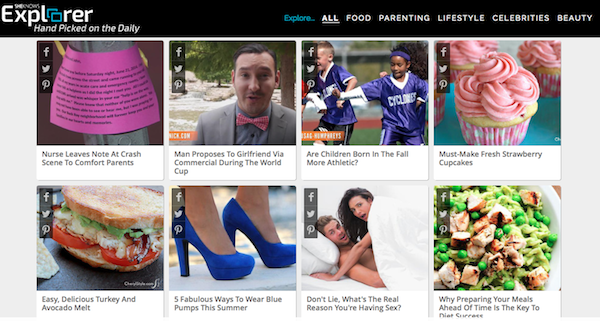 SheKnows contends that Explorer users click on at least 25 percent more content than visitors from search and social media. “Every one of those new users will have higher engagement than other sources of traffic, so it’s a much more valuable user,” SheKnows CEO Philippe Guelton said. There are 40 publishers using Explorer, including Food & Wine and Kitchen Daily.

The model is similar to the Crowd Ignite platform operated by Evolve Media (which, as it happens, used to own SheKnows). Crowd Ignite has been around a few years and is now on about 550 sites, including Evolve’s owned-and-operated sites.

Sixteen business development and technology staffers screen the sites and make sure the right content is being displayed on the platform and performing well, said Paul Hanges, vp and gm of Crowd Ignite. “Our value proposition to the publisher is the quality of the user we’re returning,” he said. “Our value is in growing unique audiences by serving statistically relevant stories.”

A third content-exchange platform, ZergNet, acts in a similar way. CEO Reggie Renner said ZergNet offers a high level of customization — publishers that want to drive traffic to a certain part of their site can choose that section to target for return traffic, for example. Unlike the others, which at least publish their own content, ZergNet for now exists as a free service to publishers, which raises questions about its sustainability.

Whether platforms like these can do better than their ad-supported brethren at solving the quality-audience problem is another matter. All three say that they carefully screen sites for quality and handpick and test all the content that runs through the platform, and that publishers can whitelist or blacklist sites or filter out, say, plastic surgery or sex content.

But as these platforms try to scale up, it seems inevitable that maintaining quality will become an issue. ZergNet, for example, claims to manually approve every article, but has just five people approving 1,000 stories a day from 2,500 publishers. Like Outbrain and its ilk, these platforms say the process is self-policing: If stories aren’t clicked on, they don’t get promoted by the algorithm.

Quality, of course, is in the eye of the beholder. When perusing these platforms, it doesn’t take long to end up on long-tail sites like Pressroomvip, in the case of Evolve’s Crowd Ignite. Pressroomvip gets the vast majority of its traffic from ZergNet and only 30 percent from the U.S., according to SimilarWeb, stats that ad buyers might find problematic.

Similarly, ZergNet users will find sites like WhatCulture, which gets 50 percent of its traffic from the U.S. but also had ZergNet as a top-referring site. Renner said ZergNet has “branched out” since adding WhatCulture early on but that “good is relative.”

“If you went to TMZ, what you want to look at is different from what you would look at if you’re on Vanity Fair,” Renner said. “We allow publishers to traffic with whomever they want.”

For Rodale, which uses Outbrain and ZergNet modules across several of its sites, it’s found that it helps to limit the paid links it gets from Outbrain to maintain its content standards, said Beth Buehler, svp of digital operations and strategy, Rodale. That naturally cuts down on the potential revenue from outbound links that the module can generate, but, said Buehler, “It’s definitely important to have quality.”

But quality and scale can be at odds, as the platforms themselves acknowledge. “That’s something we struggle with every day,” Hanges said. “This isn’t always a race to the top to get the most scale. The growth is going to be more steady than exponential.”

Jason Kint, CEO of the Online Publishers Association, said all these platforms, ad-supported or not, eventually seem to hit a limit as they try to scale up.

“That’s the rub — can you have premium and scale at the same time,” he said. “Normally, you get paid based on clicks. What you do for clicks works against premium. I would question being able to scale this kind of business that’s trying to stay premium.”