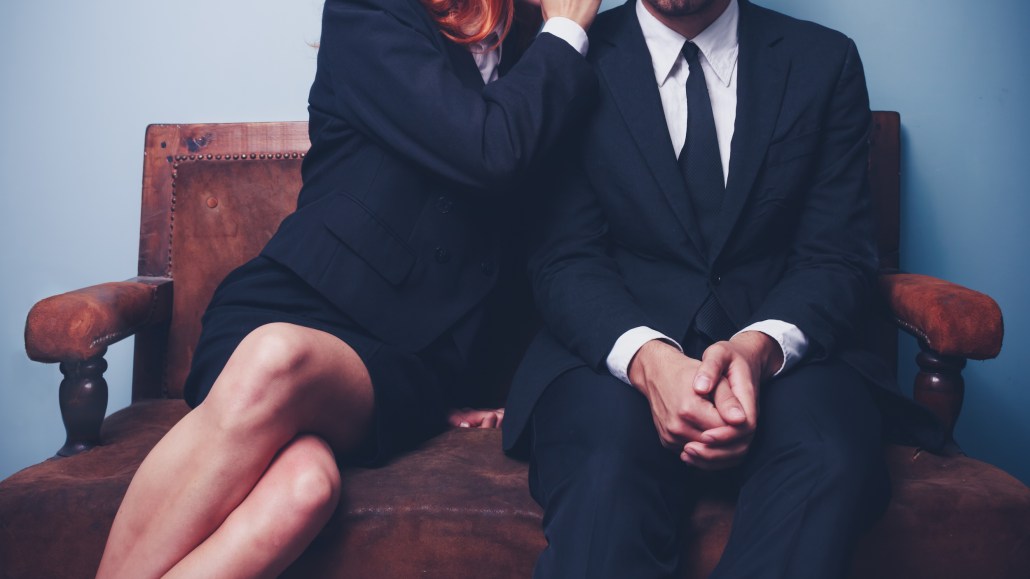 Neetzan Zimmerman was once heralded as the Internet’s foremost viral-traffic whisperer; a one-man traffic generating machine who — by gaming Facebook and appealing to people’s primal sensibilities — accounted for more than 30 million pageviews a month last fall, approximately half of Gawker Media’s total traffic at that time.

Now, Zimmerman is piggybacking on the latest Internet trend: anonymity. Zimmerman left Gawker in January to become the editor-in-chief of popular mobile app Whisper, an app that lets users post messages anonymously. The app was ranked 22nd and 31st among social networking apps in iTunes and Google Play, respectively, on Tuesday, and is already being used by Hulu and Universal Pictures to market films and series. The app’s reputation seems larger than its audience, however; comScore said Whisper had just 831,000 smartphone uniques in April.

Digiday spoke with Zimmerman about the sudden popularity of anonymity-based social platforms, Facebook’s looming role as a media gatekeeper and why brands should embrace anonymity apps (or at least be listening to them).

You were Gawker’s biggest traffic generator and then you left for a startup. What drew you away?
I saw the the traffic wave downturn coming. I knew it wasn’t a sustainable atmosphere for my position. Facebook wants to become a gatekeeper and I don’t know if that’s healthy for all of us.

The central benefit of Whisper versus Facebook and Twitter is the because we lack profiles and “re-whispering,” every piece of content is original. Having so much raw content to work with is a very attractive position.

How did you foresee Facebook cutting off traffic to publishers?
People at Facebook weren’t making it a secret that algorithm changes were coming. They personally did not care for websites that were populating the news feed and making other types of content obsolete. It’s still true today and the algorithm tweaks are not done. People complain that their feeds are essentially meme factories and it’s very difficult for people to enjoy their news feeds anymore. Facebook couldn’t allow these websites to dictate how news feed looks.

Will this be a boon for publishers that deal in more substantive stories?
That’s who this is for. The idea for Facebook is variety so we’re not seeing the same content over and over again. Beyond that it’s about creating the impression that Facebook isn’t just about viral content; that it can be a place for substantive debate and national affairs. If Facebook wants to be a media company, they have to show gravitas and they can’t do that if all they have is Upworthy clones.

What’s Whisper’s mission?
Connecting people who are otherwise disenfranchised. Our core is people who have things that they want to get off their chest but for some reason society won’t allow them to do it.

That seems noble, but some have called anonymity apps like Whisper unethical because they deal in gossip and rumor.
We stand apart from anonymity apps in that we do not allow bullying. While Secret and Yik Yak essentially allow their users to do as they please, we don’t. The No. 1 way we do that is by not allowing proper names of random individuals. Celebrities, that’s a separate issue. We also have a strict set of banned words. No slurs of any kind.

Why does Whisper need an editor-in-chief?
There are flecks of content that deserve a spotlight. When you have a person talking about being a Mormon and being gay or a service member with PTSD, that’s a personal struggle with national implications. We see thousands of national trends that go unreported in the mainstream press.

But you have no way to substantiate what these people are saying. What’s the fact-checking mechanism?
That would be true if we weren’t taking the kinds of steps that any news organization would take to establish the credibility of an anonymous source. That’s the second reason why you need a news editor. If the person is saying “I’m gay and I’m afraid to come out” there’s no need to reach out this person and say “Are you really gay?” If a person is saying “There’s a huge scandal going on in the Department of Veteran’s Affairs,” best practices kick in. 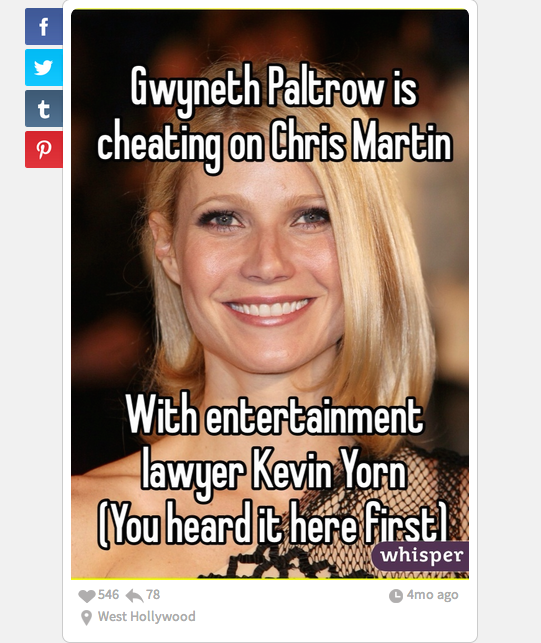 How’d you verify the “scoop” about Gwyneth Paltrow’s affair?
We had physical contact with the source, the credibility was established and then the information was walked into the Whisper platform. It’s just one of the ways we’re experimenting with Whisper as a news-gathering platform.

Why is anonymity in social so popular right now?
It has to with identity fatigue. Social networks that are linked to identity, for better or worse, force us to mask ourselves with an amplification or exaggeration of our true identity. We pick and choose the best parts to be seen. But when you do encounter struggles in your life, where do you turn? There’s this void in our life where we can’t actually turn to anyone to get the support and solace we need.

Aren’t these things cyclical, though? Are you worried about identity suddenly becoming cool again?
The difference here is that we’re not saying “Get rid of identity,” “Stop using Facebook and Twitter.” We’re saying use this a complement to that. Whisper is the place where you tell people the things actually going on in your life.