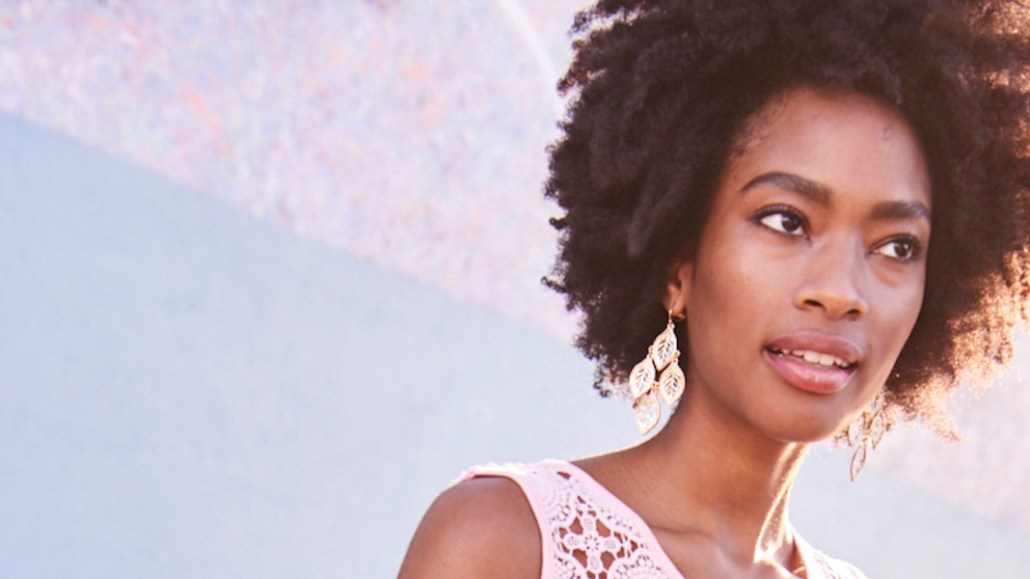 From inside a cavernous Manhattan event venue cordoned off into sections representing each of Walmart’s new private fashion labels, Walmart representatives milled about, wearing T-shirts with the company’s logo bedazzled in faux jewels peeping out from beneath crisp blazers.

They were gathered for a preview of the retail behemoth’s latest apparel collections — women’s brand Time & Tru, plus-size line Terra & Sky, menswear label George and Walmart’s first foray into childrenswear, Wonder Nation — which officially launched on Thursday in stores and online. At the same time, Walmart effectively shuttered long-held existing labels like White Stag and Faded Glory. It will retain third-party sellers like Levi’s and Lee.

At the presentation in Manhattan, the executives were particularly eager to show that the new products were reflective of popular style. “From a style standpoint, we want to do trend right,” said Twilla Brooks, Walmart’s vp of menswear apparel, showing off fresh gingham designs for George. While each of the Walmart employees remained insistent that the labels were inspired by consumer feedback across its more than 280 million weekly consumers, as well as a need to streamline its disjointed apparel inventory, the elephant in the room was undoubtedly Amazon.

As Amazon continues to become a private-label player, mass retailers that have long been in the in-house collection game are finding it’s getting harder to compete. Brands like Walmart, JCPenney, Kohl’s and Target are seeking ways to differentiate by creating new collections or experimenting with marketing strategies, as Amazon lays claim to a growing percentage of the apparel market. Now, companies like Walmart are realizing they can’t just stick to the status quo to beat the e-commerce giant.

Using private-label lines as a means to compete
Since Amazon decided to pour resources into building up its private-label roster, it’s proven what a retailer with its resources and customer data can do. With efforts like Amazon Prime Wardrobe and a growing list of specialized private labels, by the end of 2017, the company had amassed more than $21 million from its fashion lines, led by its Lark & Ro brand.

“Private label has been mass retail’s success story in its bid to lure consumers away from specialty stores,” said Katie Smith, retail analysis and insights director at Edited, a retail analytics firm. “For the shopper, the private label advantage is its affordable price point, which can be 50 percent of the overall retailer’s price [across other brands].”

At Walmart, this price is lower; according to data from Edited, Walmart’s average apparel price is $10.82, compared to $14.79 at Target. As a bargain brand, Walmart hopes its low price points will give it an edge among consumers that are spending a diminishing portion of their budgets on fashion, now just 3 percent, down from 6 percent in the 1980s.

And while Walmart has been hurt by heavy discounting in the past, its sellout rates of products have grown significantly, according to Edited. Between Q3 and Q4 of 2017, its apparel sellout rate grew by 489 percent, which Smith said is “a strong indication of customer favor.”

At the Walmart presentation on Tuesday, Deanah Baker, svp and general merchandise manager of apparel at Walmart, acknowledged that while the new collections aren’t exactly couture, they are significantly more fashionable than past styles. While showing products from the Time & Tru label, she touted the brand’s “elevated fabrics.”

Her goal is that Walmart’s loyal customer base — which shops online or in store an average of six times a month, she said — will be a captive audience to the upgraded styles. Up until now, the Walmart customer looked to the brand for basics like socks, T-shirts and jeans. Now it’s trying to rebrand itself as a bonafide apparel destination, and has “leaned into dresses and fashion tops,” Baker said.

In many ways, Walmart’s fashion trajectory is nearly identical to Amazon’s, which evolved from its private-label basic lines to a slew of fashion brands that shook up the market. At the same time, Walmart has attempted to establish itself in the apparel industry with strategic moves like investing in retail incubator Store No. 8 and acquiring digitally native brands like Modcloth and Bonobos, which Bonobos CEO Andy Dunn conceded initially seemed like a “strange fit.”

“Walmart is piggybacking on what everybody else is doing,” said Jackie Wilson, CEO of American Fashion Network, which produces private-label lines for brands like Amazon Fashion, American Eagle Outfitters, Kohl’s and JCPenney. “Kohl’s is incredibly successful with private and exclusive brands, and Target is kind of the crown of it all. think Walmart is going back in and looking at everything, and packing some compelling product behind the name and putting itself in a position to compete.”

Target, for example, has produced its own private labels for years, launching capsule collections with celebrities and designers as far back as 1999. Last year, it expanded its popular private labels, launching new brands like A New Day and also Joy Lab, an activewear collection by Who What Wear (which continues to design seasonal styles for the retailer).

Reimagining mass fashion in the age of Amazon
Seeing the success of retailers like Target — it continues to lead the pack in apparel sales, comprising 19 percent of its total sales, versus 16 percent at Amazon and 9 percent at Walmart — Walmart is attempting to try its hand at the retailer’s tactics including aspirational advertising, influencer marketing and physical store remodeling.

According to Baker, 1,000 stores in the U.S. will restructure their apparel sections, accommodating for the new collections with a focus on easier navigation, brighter lighting and improved signage. Additionally, the company brought on celebrity stylist Elizabeth Stewart to promote the collections and share outfit suggestions and tips with shoppers.

“We wanted to know what would allow them to spend more of their apparel wallet with us at Walmart. What they told us is we need more style from you, we need comfort and quality,” she said, referring to a series of feedback surveys sent out to existing shoppers.

However, Wilson said she doesn’t view Walmart as a viable fashion competitor to Amazon. Despite a focus on heightened style, she said there is still a disconnect between Walmart and fashion that will continue to support it as synonymous with bargains on hard goods. “I feel like what Walmart is doing, and how they are pitching this publicly and putting media behind this relaunch, misses the mark,” she said.

Adding to the challenge is Amazon’s vast wealth of data and algorithms that work in tandem to boost sales and  the visibility of private labels. Unlike most of its competitors, the company is uniquely equipped with billions of data points and advanced resources that provide intimate insights into consumer behavior. As a result, Amazon is better prepared to strategically target shoppers, using tactics like “add to order” buttons and recommended products features.

Looking to the future — not just for Walmart, but for all of its competitors — Wilson said she anticipates brands will focus on areas where they can actually make headway. While they’ll never have the amount of data, or master the scale and shipping speed of Amazon, they have the ability to build more personal connections with shoppers both in-store and online.

“Competing with Amazon doesn’t just necessarily mean having product on your website that you can ship and consumers will have tomorrow. It’s about everything that’s happening digitally,” said Wilson. “There are lots of moves in specific categories that retailers can use to capture that kind of thing in the consumers’ mind.”