The best of the week: Drinking rum, watching TV and getting on Line

It is the very thick of summer, which is perhaps why one of our best performing stories of the week was about…booze. In case you missed it, here’s what went down in Digiday this week: Senior piña colada correspondent Tanya Dua provided a nice inside look this week at why Malibu rum is spending 75 percent of its marketing budget on digital.

“We felt like we needed to look ahead in the digital landscape and recognize the ability of the platforms as they were evolving to connect with consumers in a fairly targeted way,” said Andre Marciano, director of media and integrated communication at Pernod Ricard USA. “With consumers always on their mobile phones, it is the ultimate point to remind them to choose our products in fun ways.”

The aggressive digital push already seems to be paying dividends: According to an industry analyst report from Bernstein Research last year, Pernod Ricard’s frenetic promotional activity, particularly on Chivas and Malibu, has helped grow sales, with Malibu’s volume of sales increasing by 4.3 percent until September 2015. That came after sluggish and declining sales in previous years.

Don’t touch that dial
Thrillist expects to make the leap to “TV” — whether that’s Netflix, Go90 or other over-the-top options — within the next year, Thrillist Media Group CEO Ben Lerer said on this week’s episode of the Digiday Podcast. Thrillist is now building a TV group to manage deals with outside production companies and its own internal video group to find ideas for bringing the Thrillist brand to life in TV.

“If we want to build a generationally significant media company, we have to bring our content to life in a lot of different ways,” Lerer said. “We’ve traditionally done that in written and visual, and we should be able to do that in all different formats.”

Lerer, who is also a venture capital investor, said the massive shifts in distribution today is akin to what happened in the 1980s with the rise of cable TV, providing gigantic opportunities to content companies attuned to this new distribution reality.

The house that Bezos bought
The Washington Post has already shown its ability to make big online traffic gains. But these days lots of traffic doesn’t automatically mean a healthy financial foundation for publishers. That’s why the Post is focused on getting people to open their wallets and subscribe once they start becoming regular readers. Toward that end, it’s slashed page load time, made a big push with email newsletters as loyalty tools and closed site-access loopholes.

It seems to have worked, reports Lucia “Scoop” Moses: Over the past year, digital-only subs have grown 145 percent, mostly coming from the U.S. outside of D.C. and including a “significant” portion from overseas, according to Beth Diaz, vp of audience development and analytics.

Get in Line
Line, Japan’s popular messaging app, soared in its debut on the New York Stock Exchange on Thursday morning after completing the largest public offering of any tech company this year. Much had already been made about how it was the biggest IPO from a technology company this year — Line raised around $1 billion and is valued at up to $6 billion — which only serves to underscore a general excitement around messaging apps.

So Lucinda “Not A Chatbot” Southern cobbled together six charts that outline everything you need to know about Line specifically, and messaging apps in general: 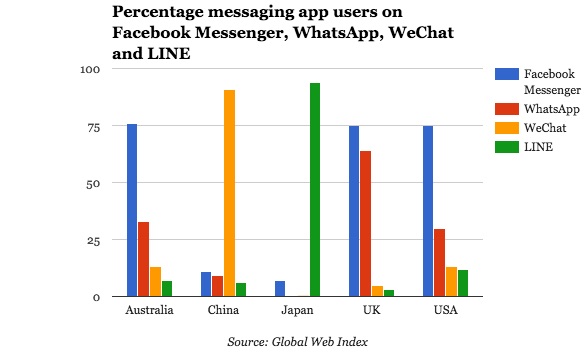 Physician, heal thyself
Public Relations Twitter kicked into high outrage gear after Lucia Moses wrote this little piece of service journalism: 10 PR tactics reporters hate most. The article may have been a bit of inside baseball, but it’s resonated with media types — both those who nodded in agreement as they read, and those who were offended to their very cores. A few choice gems: Journalists don’t like pitches that start with a reference to the reporter’s recent tweets, which is almost as bad as pitches from publicists who clearly have no sense of what the reporter covers.

Not that journalists are easy to work with either. Here’s a choice comment on the story — perhaps we’ll have to do a roundup of things PR folks hate about reporters.