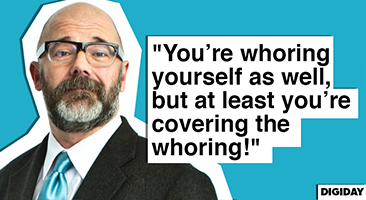 Journalist and blog entrepreneur Andrew Sullivan is not one to jump on bandwagons. The outspoken political blogger left the Daily Beast nearly a year and a half ago to launch The Dish, his own subscription-driven news site.

Today Sullivan’s Dish remains defiantly ad-free, the $875,000 he raked in last year a testament to the counterintuitive fact that people will pay for content online. Sullivan, who recently delivered a lecture at Harvard’s Nieman Foundation for Journalism titled “How Advertising Defeated Journalism,” spoke with Digiday about the state of the industry and why native advertising is the worst. Excerpts:

Can you give an example?
I’ll tell you a little story. A friend of mine once looked at BuzzFeed and said, “It’s doomed. There are no ads. How can it survive?” I said, “You don’t understand. Everything is an ad!”

BuzzFeed is certainly loaded with native advertising, but —
Native advertising. Sponsored content. What the fuck does that mean? Branded content? For fuck’s sake. As soon as they start giving you gibberish, you realize they’re doing something naughty.

As far as native goes, though, sites like the New York Times and Atlantic clearly differentiate their native ads, right?
They do a better job. But it’s a question of which level of deception are you engaged in. That’s all it is. If they wanted not to deceive, they would have these as ads, not as paid posts.

So what’s a model that works?
If you’re good enough, you should be able to have your readers subscribe to your site. I’m a tiny site by comparison with no resources. I don’t even have a business department, don’t even have a publisher. And we’ve managed to get 30,000 subscribers or thereabout, $900,000 in revenue last year, and our renewal rate is somewhere around 85 percent.

Well, congrats.
I’m not sitting here being pious. We’re just a little blog. But what does it tell you that BuzzFeed wouldn’t even dream of asking its readers to subscribe? Daily Beast can’t ask its readership to contribute. Gawker can’t get people to pay for its product. I don’t know why they’re not embarrassed that they can’t get their readers to support their work.

You’re an anomaly, though. And the problem with the Web is that we’re all used to getting content for free.
People want to launch big things right away. Since the model is free, they have no option but to throw themselves at the mercy of advertisers. Since they have no subscribers, they have no measure to counteract their influence.

I’ve heard one big mainstream editor argue that, more and more, journalists need to lend their editorial expertise to branded content.
That’s not journalism, that’s copywriting. It’s advertising! To say that no journalist can finance his or her work through readers paying for it is an astonishing indictment of journalism and a lack of confidence in the whole enterprise.

What’s your take on the trend of big-name journalists like Ezra Klein and Nate Silver and Kara Swisher building publications around their personal brands?
I did it first! I like them all, and I admire them. First, there is a conflict between the institution and your fame. So you go independent. But I’m disappointed. What would have stopped Ezra or Nate with such strong brands to say, “Support us with subscriptions”? It’s the honest way.

What’s your take on the current vogue of explainer sites like the Upshot and Vox?
I think they’re terrific in a way. My only concern about them is an editorial one. I think explainers make sense in a mix of content that also has news. If it’s only news or only explainers, it becomes a little difficult to envision as a coherent whole that sustains the reader’s interest.

Speaking of reader interest, why doesn’t the Dish have a comments section?
We’ve had polls of our readers, and 2 to 1, they don’t want them. So we defer to them. What we do instead is curate our email in-tray to present the best arguments and stories and anecdotes and emails about the various topics we’re covering. We edit them and present them as a post. In other words, less can be more. If these papers would just give up their obsession with size and start rebuilding their business on integrity, we’d have a healthier industry.

How unhealthy is the industry?
I see the Guardian basically deciding to merge with Unilever. They have a whole staff of journalists writing articles with Unilever’s funding. It’s not journalism, it’s public relations.

But the Guardian is arguably doing some of the best journalism in the world right now.
At one point, the reputation of that journalism is going to tarnished by the fact that you’re not sure if it’s done out of a commercial interest. I have to say I don’t think it’s sustainable. It will collapse when the readers figure it out. It should have been front-page news that Time magazine reporters were to begin reporting to the business side. You are an honorable exception as someone who covers this.

Digiday runs sponsored content.
You’re whoring yourself as well, but at least you’re covering the whoring! They’ve fired all their brothel reporters and started hiring them as brothel greeters.

Photo courtesy of the Daily Beast